About four months ago I bought a Groupon for an Ethiopian cooking class.  It was way more than I usually spend on a Groupon (or on a cooking class).
So I was doubly disappointed when, last week, the date I had signed up for finally rolled around and I discovered that it was a total bomb — not only one of the most disappointing purchases I’ve made in awhile, but also among the most uninspiring cooking experiences I’ve ever had.
This bummed me out on many levels — the first of which being that I think the inevitable downhill trend of Groupon has finally arrived, and that I can no longer think of it as a trustworthy showcase of verified, cool local businesses offering me awesome deals, but instead a total gamble on the part of merchants and customers alike.
I feel bad for being so rough on this particular company, because they were very cheerful throughout the whole evening, but I’m a pretty frugal person and cheerful doesn’t always cut it.  My goal isn’t to slander them, so I won’t go into details about why it was such a disappointment, but I’ll just say that the embarrassing level of disorganization, lack of preparation, and lack of any specialized, traditional, or culinarily skillful knowledge on the part of the instructor made the fact that this was a $100 class, sold for $50 on Groupon, appalling.
But, it did totally make me want to cook some dahl this week, and I did learn the names of a few spices I want to check out at the Ethiopian market on MLK and play around with.
My only explanation for the fact that I want to boil lentils in my kitchen until they explode is that — yesterday’s summer solstice being the exception — Portland has felt like November since…well, pretty much November.

I had half a yellow onion in my fridge so I chopped that up, along with a few cloves of garlic. 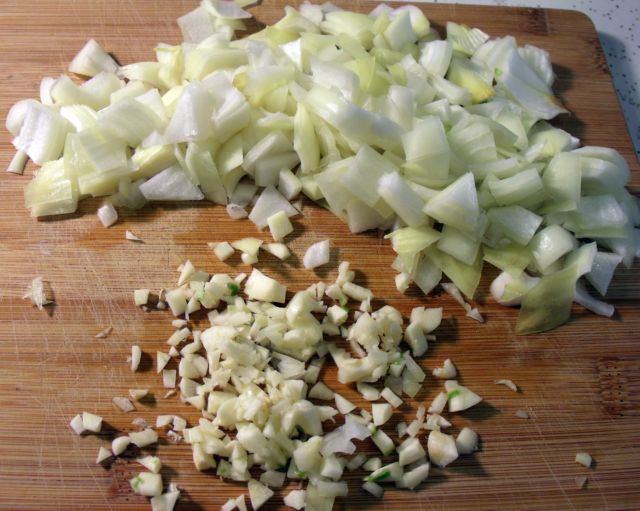 I sauteed this up in some oil, along with some fresh ground cumin, paprika, and curry powder, adding 1 cup of dried red lentils after the onions had cooked a bit. 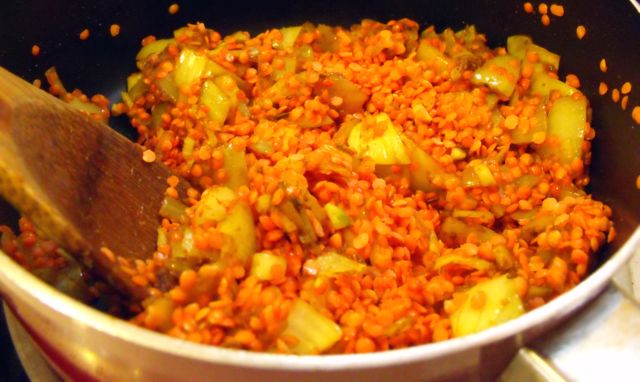 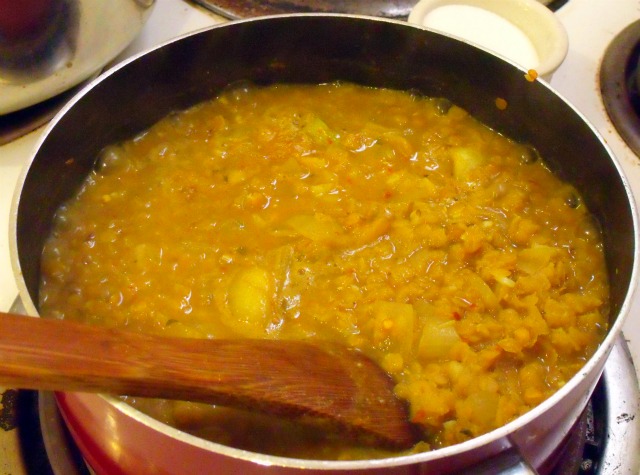 Fortunately, a more positive recent Groupon experience landed me with some new spices from Spicely, so I got to break open my new package of harissa and add a tablespoon of this to the mix as well.
To accompany the dahl I made a cup of jasmine rice, flavored with 3/4T of my new rice seasoning, and added in a handful of Thompson raisins, and about a cup of frozen peas once it was nearly done cooking.  Oh, and about a quarter of a red onion, finely chopped. 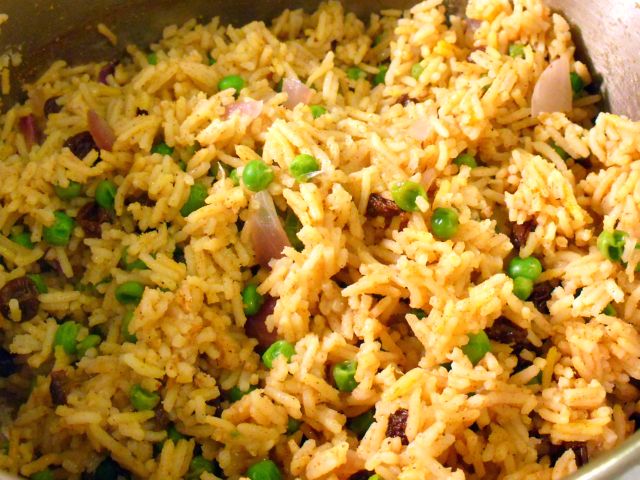 But really, what made this meal was the tupperware of fresh greens that I left Jesse’s house with Monday morning, picked fresh from his garden which is now overgrown with flourishing heads of red leaf lettuce, mustard greens, arugula, romaine…we picked a bounty on Sunday night to accompany our homemade Reubens. 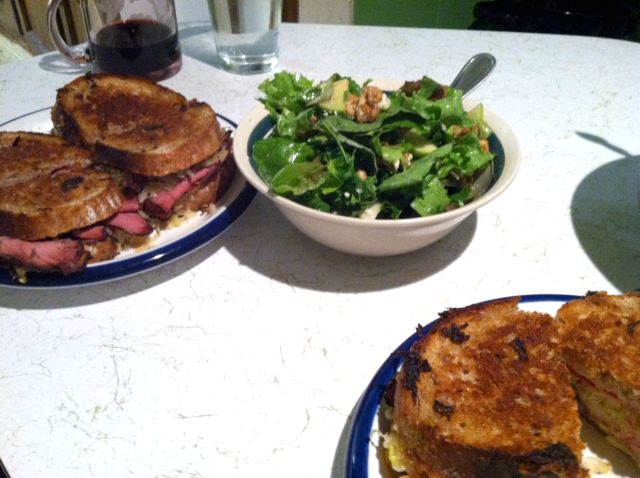 And so, I got to savor the leftovers as a side dish to this meal. 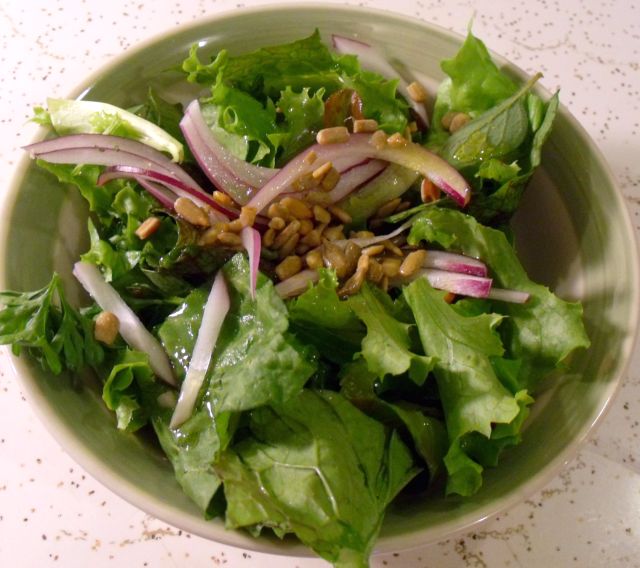 Trust me, when you have greens this tasty, you don’t want to put anything on them besides olive oil, apple cider vinegar, lemon juice, and salt, garnished with a handful of sunflower seeds and red onion slivers. 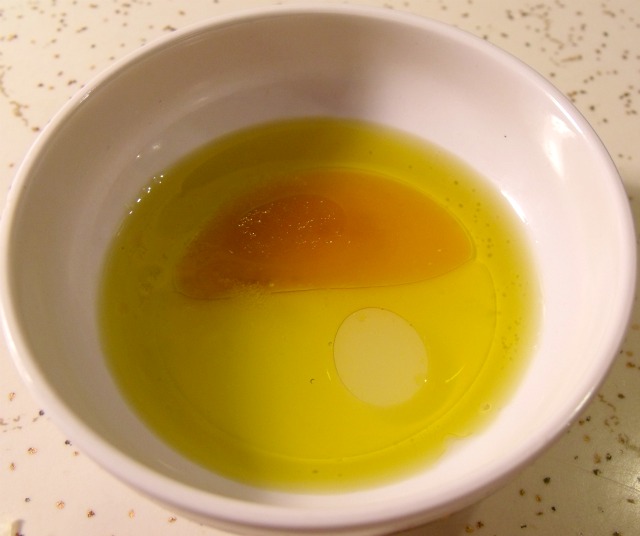 ***UPDATED 6/24/12***
I just made another delicious version of this, adding some slivered carrots to the dahl along with a hefty portion of berbere spice, and some V8 juice.  And, to give a little variety in choices for what one could scoop up with their homemade enjera, I made good use of some bok choy I had in the fridge that was on its last legs by sauteeing that together with some frozen spinach, in coconut oil.  Once the greens started to wilt I added some chopped garlic, homemade chicken stock, coriander, harissa, and ras el hanout to make a spicy, salty dish of greens that balances the dahl perfectly.