I got to spend my Thanksgiving with a whole host of wonderful, food-loving people…21, to be exact.  When I asked the host what I could bring, she said the only thing they were lacking was a sweet potato dish. 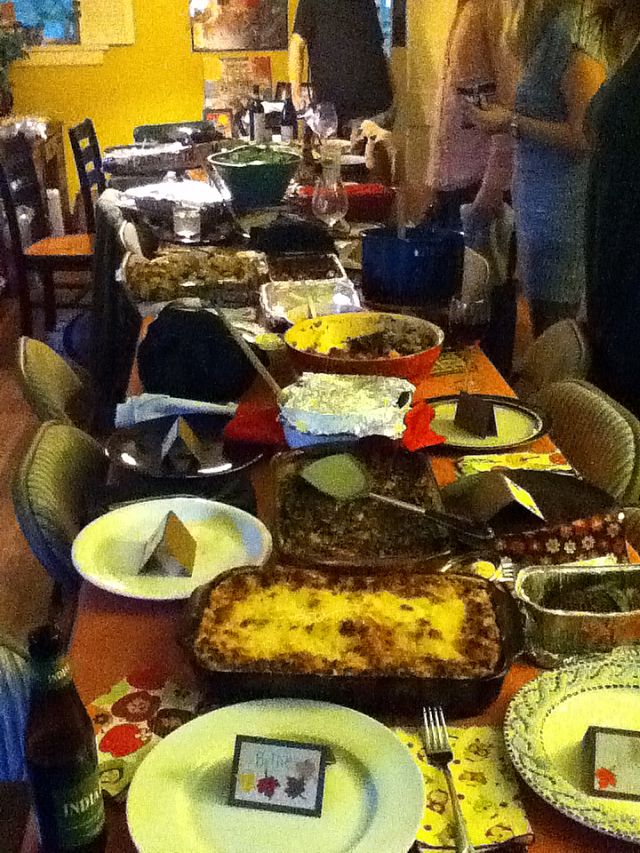 although really…I think we would have been just fine.
Now, sweet potatoes have always been sort of a thorn in my side.  I really hate to admit that there are vegetables I don’t like, and it wasn’t until just recently that I realized I’m actually even allowed to make that claim, as a quarter-hippie, locavore-whole-foodie.  But let’s say that if hypothetically there were vegetables that I’d pick last for kickball, sweet potatoes would be on that list.  But you know, I’m always up for a challenge.
So I knew I wouldn’t be doing the old traditional sweet potato mash with marshmallows on top, and that it would have to be something a little off-the-wall and creative to satisfy both me and Thanksgiving tradition.  Enter my current favorite food blog. 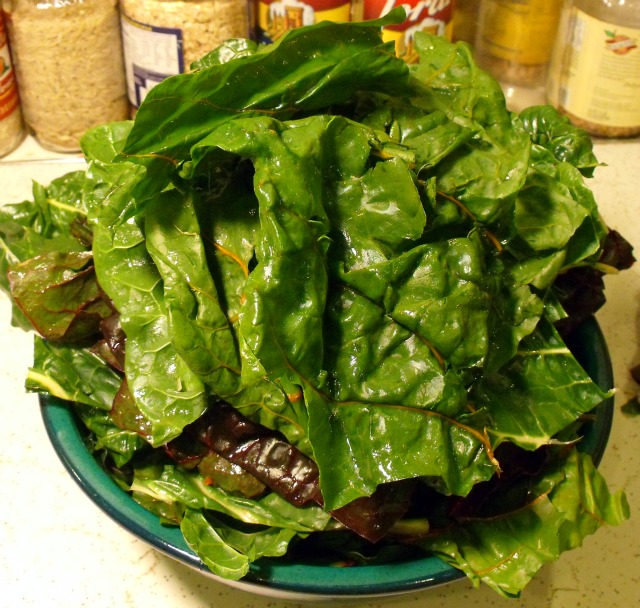 Yes, I think a swiss chard sweet potato gratin is exactly what we need to salvage this assignment.
This dish required quite a few different stages, which seemed totally fine for the day I had set out for myself: a 100% no-work morning (for the first time since, I believe, New Year’s Day), a homemade latte, some back episodes of CraftyPod and This American Life coming through my kitchen speakers, and every pot and pan clean and at my disposal. 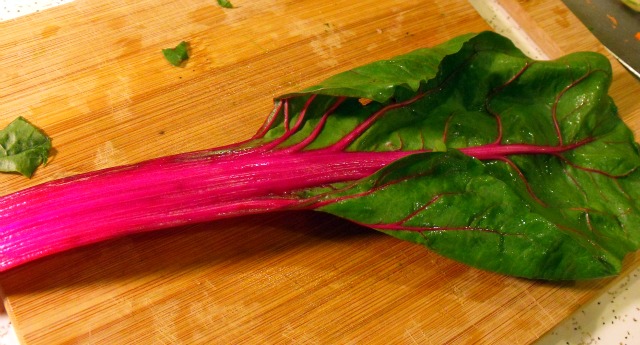 Can you believe nature made this color up?!
First, to prep the chard, I de-stemmed and chopped big rough leaves from the three massive bunches I purchased the other day — some rainbow, some regular. 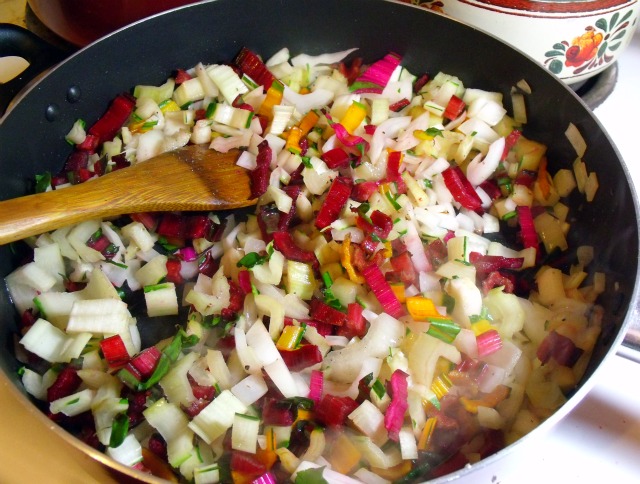 The stems got sauteed with a lot of butter, onion, and fresh grated nutmeg.  I’m not a huge fan of the stems actually, so I sauteed the leaves separately; that way I could dole out the stems conservatively as I assembled the layers later on. 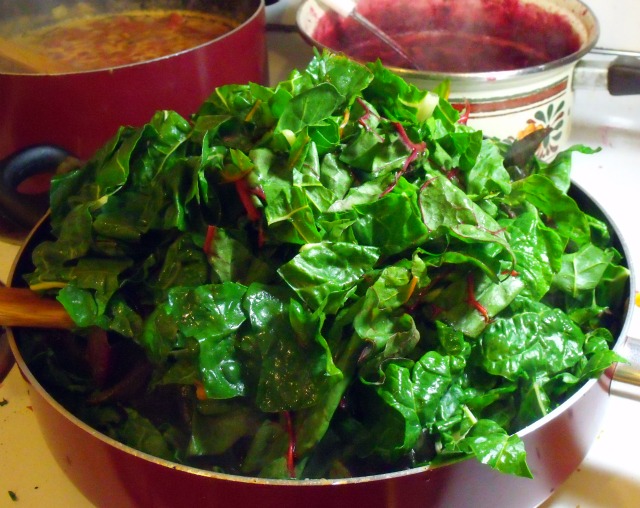 Next came the cream sauce.  I love putting tons of garlic in my cream sauces, so I started with something that looked like this. 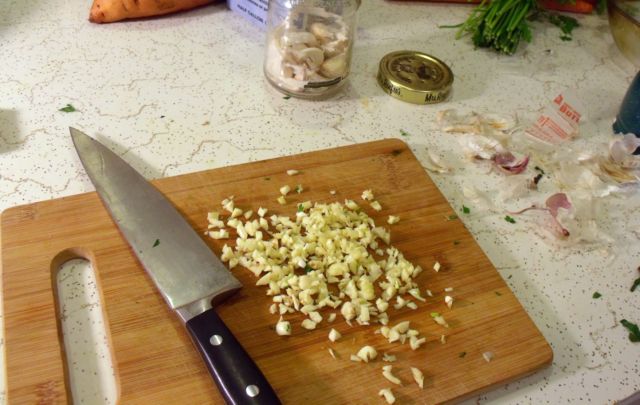 Then I continued with my normal cheese sauce recipe (minus the cheese), added more nutmeg, and set that aside while I assembled the gratin. 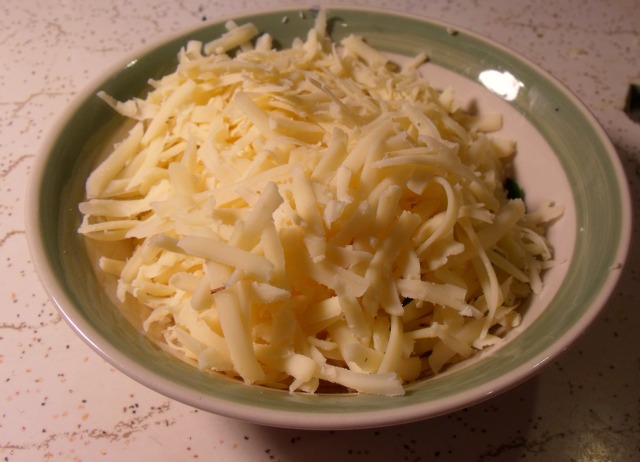 The casserole begins with a layer of sweet potato discs (see!  You wouldn’t even know there were sweet potatoes in here if it weren’t for this sneaky step), and then continues with repetitions of salt, pepper, chard, cream sauce, gruyere cheese, and more sweet potatoes, until everything is all used up.  Oh, but always finishing with a nice thick layer of sauce and a sprinkling of cheese, of course. 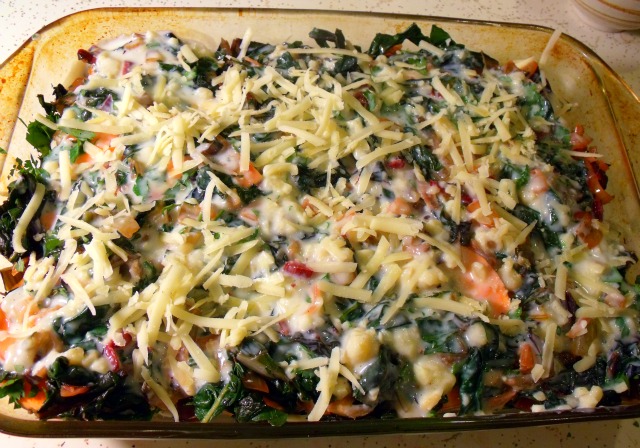 I baked it at 400 degrees for an hour, with no covering, so that any additional moisture from the greens and sauce would evaporate.  Really, anything coming out of the oven after that long with browned cheese on top can’t help but look tantalizing. 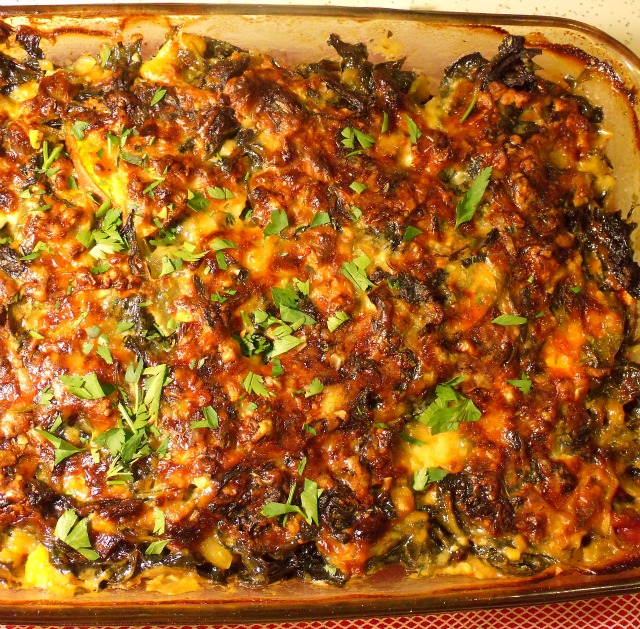 Oh!  And I also made some cranberry sauce, too. 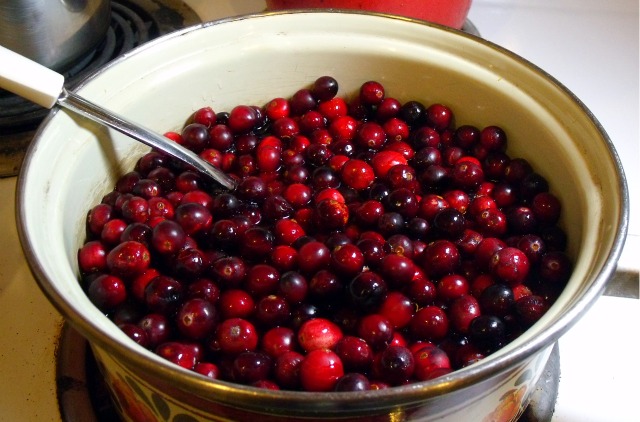 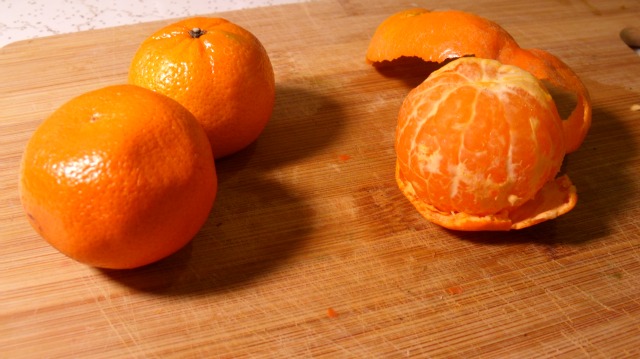 And a glug or two of brown sugar cinnamon syrup (I use Torani, usually for my coffee, but it often comes in handy for cooking, too!  I will be totally honest here and admit that I purchase these wholesale from Cash & Carry). 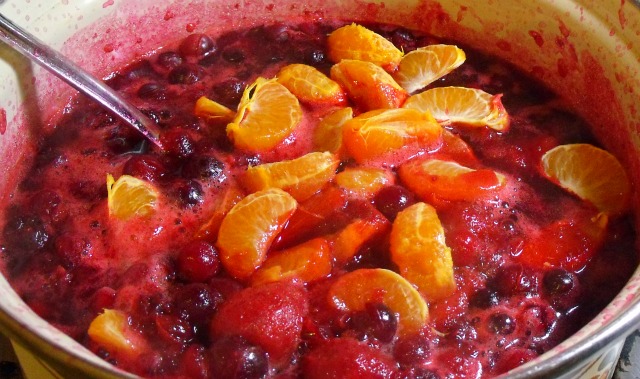