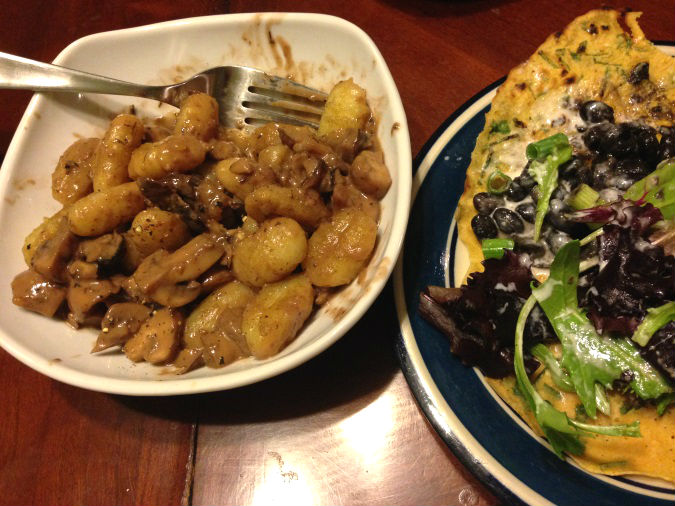 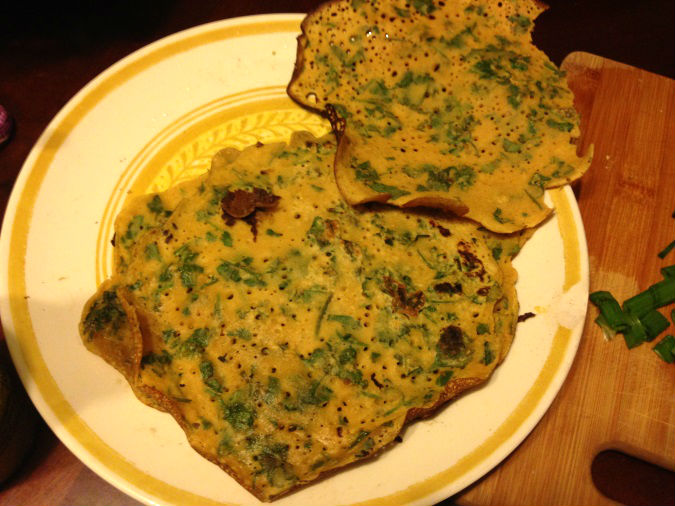 This has got to be a sign.  When I sat down Tuesday morning to eat my breakfast of a fried egg on a toasted English muffin with TJ’s eggplant spread and a kale-carrot salad, this was one of the many abandoned browser tabs I’d left open the week before, for perusing while I feasted (since one of my favorite things to do is read about food while I’m eating food).


I had just realized about twenty minutes earlier that grocery shopping was one thing I could check off my list for this weekend, after tallying it up and realizing that I only have about $14 left for the rest of the month’s groceries.


No worries, though.  If you’ll recall, I’ve got some food on hand that I can delve into, keeping the grocery runs to produce-only.  Plus, last week I’d stocked up on some hearty, keep-well veggies that will easily last a week or two — things like a head of cauliflower, a bag of “Southern greens,” some fingerling potatoes, carrots, sunchokes, and a head of lettuce that are all still left in the fridge.


And with a loaf of whole wheat rosemary herb bread rising as we speak, I know this means my lunches this week will be more sandwich-oriented (roasted eggplant and cheese!  Egg and fresh lettuce!  Tuna and nori!), and my dinner simpler.  Probably would have been the case anyway, given that this week not only do I have V-Day dinner with the girls, but am either hosting Knit Night or teaching a class all three weekday evenings.


So when I started reading this recipe, and remembered that chickpeas are one of my favorite foods in the world, I jumped up and got some soaking right away.


And then, I kept reading, only to discover that she recommends accompanying your chana masala with this cumin-bathed cauliflower and potato roast (which in my world, will be supplemented by sunchokes, a.k.a. potatoes with a little bit of an attitude).  It’s like she was playing Iron Chef in my fridge or something.


And then, I remembered that, for no particular reason, the night before I’d used the remaining tub of Greek yogurt in my fridge, that I had been worried would go bad, to make a big batch of cucumber raita.  For real??  The universe is trying to tell me something, clearly.


I’m going to spare you my recipe and just send you right over to Smitten Kitchen’s instead, because not only did I forget my camera at work this week and my iPhone shots of this culinary experiment are so woefully grainy and overexposed I can’t even bear to post them online, and because while trying to drag and drop a different photo in here (note to Bloggers: don’t do that), I lost the entire post I’d just written, and anyone who’s spent 45 minutes writing something and then lost it knows that round two always feels just a little bit bitter and despondent.


Basically, both of these dishes are amazing, miraculously use up exactly the vegetables that I have lying around in my kitchen at the moment, and have already done a fine job of carrying me through my work week, and probably well into the weekend, without spending a dime on groceries this week.

My other fellow Project: Food Budget-ers: