I’ve gotten into a nice little tradition these past few mellow months of going in to work late on Sunday afternoons after busy and plan-filled weekends, not having any social commitments on Sunday evening, and just staying late and finishing up whatever I need to before coming home for a night with myself to listen to Radiolab, do my dishes, and eat an easy meal of leftovers in some form. 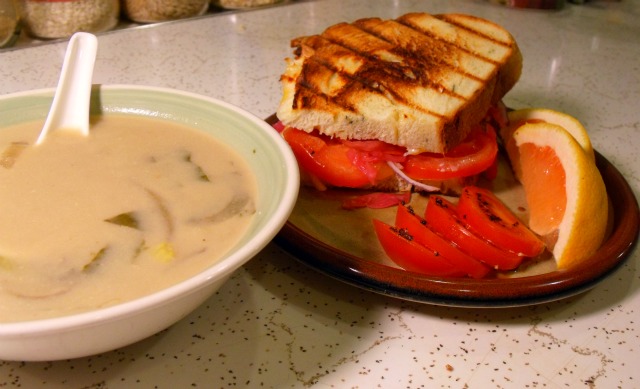 Tonight, it was a reheated bowl of some delicious Tom Kah soup I’d made earlier in the week, with chicken and napa cabbage, an entire sliced yellow onion, and fresh crimini mushrooms. 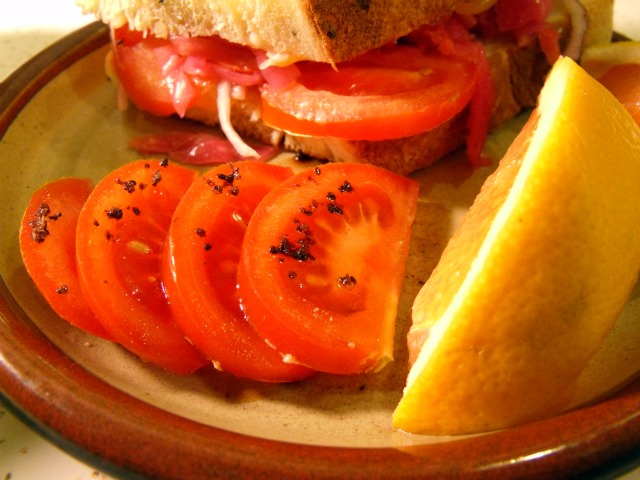 Balanced with a culinarily incgonruous, but nevertheless delicious gourmet grilled cheese sandwich: fancy cheese left over from my birthday party, fresh tomato, and red onion grilled inside of my homemade herb-parmesan bread from this week, stuffed with some amazing homemade sauerkraut gifted to me by a friend. 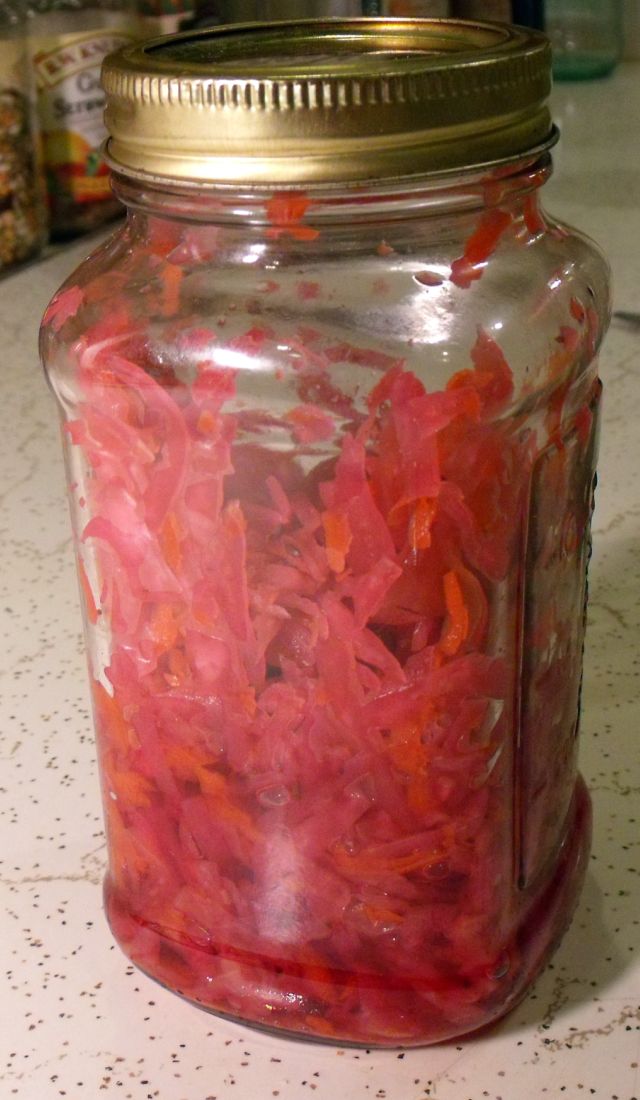 For garnish/dessert: the rest of the tomato sliced, with nicoise olive salt and a drizzle of balsamic, and the very last of my fruit for this week — a trooper of a grapefruit.

So a few of my friends and I have a little tradition of doing V-Day ladies’ night every year, which usually entails getting dressed up and going out to a fancy dinner at restaurants I wouldn’t normally find myself at.
But this year, due to some vegan constraints (or faux vegan, we later found out), we decided to do dinner in, so I suddenly found myself hosting a Valentine’s Day dinner party for 7.
So with my only constraints being meat-and-dairy-free, and complementary to the pasta salad and ginger beet soup that Kate and Helene were bringing (yeah, it was a lot of beets.  But it’s Valentine’s Day!  And winter in Oregon!), here’s what I came up with as a supplementary menu:
In case you haven’t noticed, I am fond of making entire meals out of combinations of appetizers.
The bruschetta recipe is one of my favorites, and I was so stoked because I usually don’t get to whip this one out until summer barbecue time, but for some reason the tomatoes at New Seasons keep being from California, so I’m kind of going nuts with them.
Start by mincing 4 garlic cloves and throw it in a mixing bowl with 1 teaspoon coarse salt, some red pepper flakes, and the juice of an entire lemon. 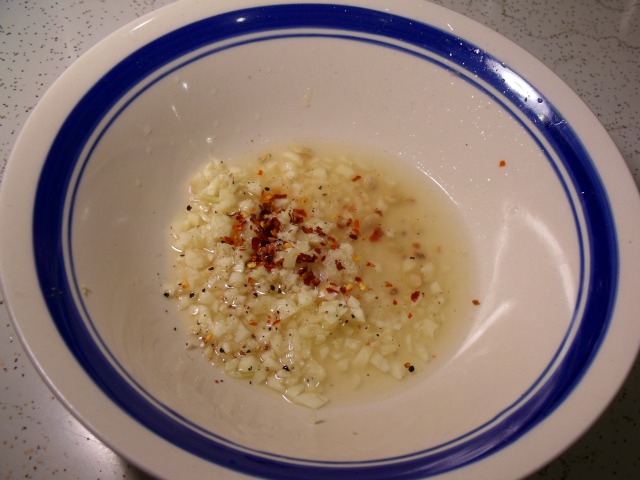 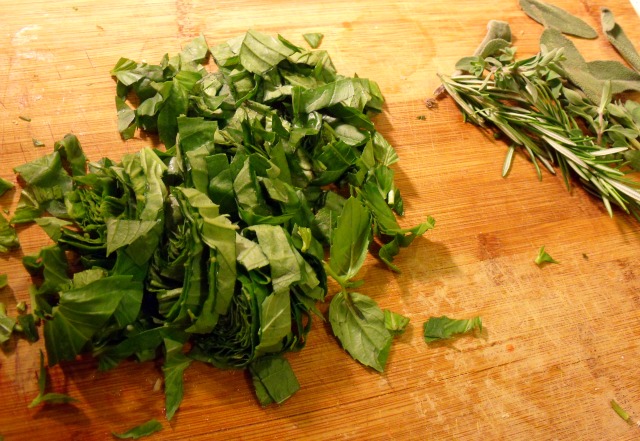 Add these to the bowl and pulverize them with a potato masher, then add 2 teaspoons white sugar, and 1/3 cup balsamic vinegar. Let this all marinade together for an hour or so, and then add 2 more finely diced tomatoes and a glug or two of olive oil.  I could have diced these more finely, but this bruschetta tastes so good I always just end up eating it with a spoon anyway, so I’m not so concerned with its steadiness on a cracker. 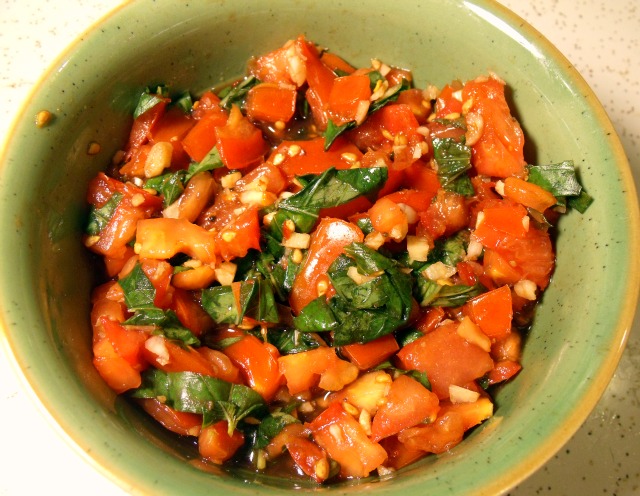 I find that by the time this is ready to serve, it’s way more liquidy than I like.  Fortunately, it’s delicious liquid, so at this point I strain out all the excess juice, and set it aside for a future incarnation as salad dressing.
Then, the baguettes.  This is a super simple recipe, and astonishingly fast.  I’m used to baking bread that takes 4-5 hours in total, all said and done, with multiple risings.  Not this one — you can go from initial mixing to out-of-the-oven in just over two hours.  The key is a ton of yeast.
Start by mixing 5 teaspoons yeast with half a cup of lukewarm water, and letting it activate for 5 minutes.  Add 1.5 teaspoons salt and 4 cups of flour, and slowly incorporate more water until you have a nice, doughy consistency, kneading for 5-10 additional minutes.  Return it to the bowl, cover it, and let it rise for 1 hour.
Divide the dough into two portions, and roll them out into long tubes.  I start in the middle and massage the dough, rolling while I press down with my hands and move out towards the ends, stretching and smoothing the dough at the same time.

Once you’re happy with the length, place them on the baking sheet you’ll be using, make those diagonal scores you always see on baguettes, and let them sit for about 20 more minutes.  Meanwhile, preheat your oven to 400 degrees.
The key to baguettes is they’ll be baking at a very high temperature, for a very long time (1 hour!).  That’s how you get the outside crusty and the inside chewy.  But, to prevent the crust from burning, you need to remove them every 15 minutes and baste them with cold water.

By the way, I like to do really deep scores; that way you don’t have to deal with all the shrapnel that comes from slicing baguettes; you can just tear each piece off as you go. 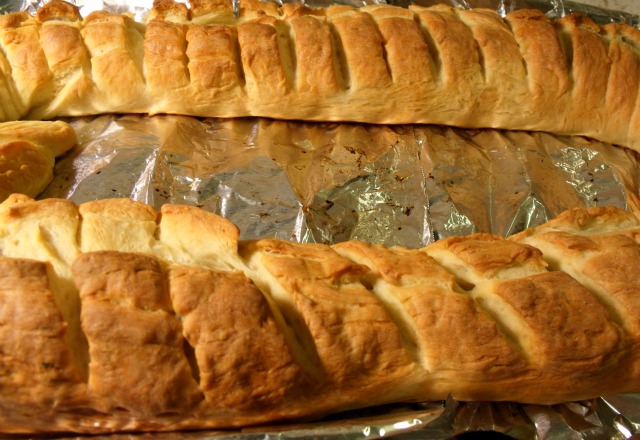 I know, right?!
Now, the eggplant.  This is another Smitten Kitchen-inspired recipe, and a super easy one to toss together for a dinner party or potluck.
Start by slicing 2 medium size eggplants to 1/4-inch thickness.  Arrange them on a baking sheet, brush the tops with olive oil, and broil for 3-4 minutes per side. 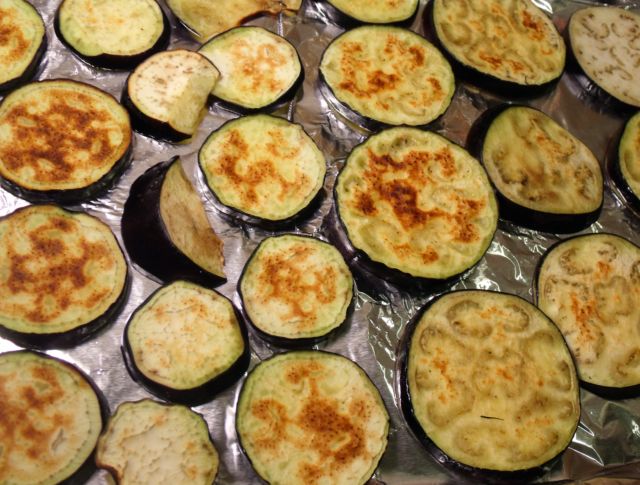 Meanwhile, mix together 2 tablespoons red wine vinegar, 2 tablespoons small capers, 1/4 cup chopped fresh herbs like mint or parsley, 1/4 teaspoon salt, some cracked pepper, and 3 tablespoons olive oil.  As the batches of eggplant come out of the oven (although I have TWO ovens, with independent temperatures, I for some reason only have one baking sheet, so this dish inevitably comes in rounds for me), let them cool and add them to this marinade, gently mixing. 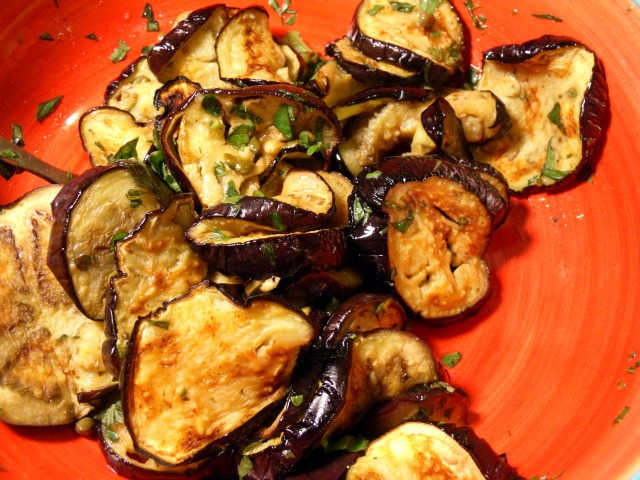 And then finally, the salad.  This only forethought this required was to start a large beet roasting while I prepared everything else, wrapping it in foil and tossing it in a 400-degree oven for an hour, then unwrapping it and letting it cool.
At this point, the skin will slide off easily in your fingers and the only slicing I had to do was to cut the beet into little half-circles and add it to a bed of mixed greens. 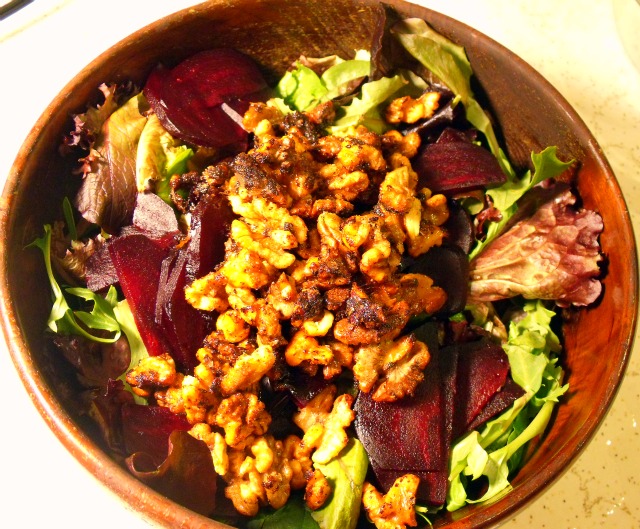 Candied walnuts are always a welcome addition to any salad, but remember, vegan!  Instead of candying the nuts in my usual go-to of butter and brown sugar, I instead melted together some coconut oil, agave syrup, cinnamon, and a bit of salt, and then threw the walnuts in, browning them until just before they were about to burn.
And the dressing?  Well this is where we welcome back the strained juice from the bruschetta.  There was an entire mason jar’s worth of liquid left over, so I later whipped up a larger batch of this and am keeping it in the fridge as a ready-to-go homemade dressing.
But for this salad I used about a quarter of the liquid, and added to it: 1 minced shallot, a spoonful of Dijon mustard, salt, pepper, a pinch of fennel seeds, and some nutritional yeast (I can’t help it!  It makes every dressing better).  Yum. 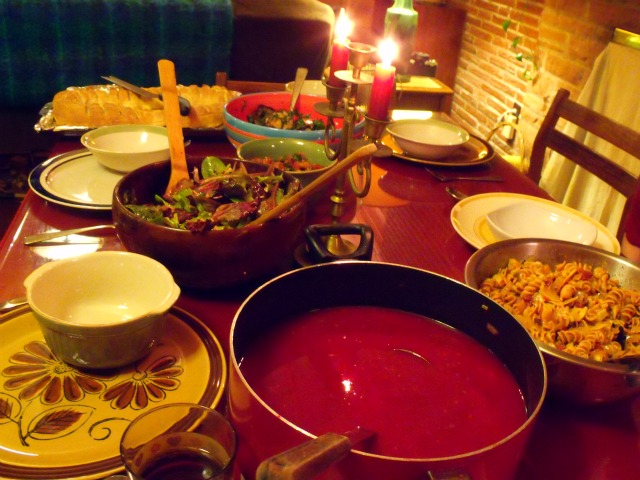 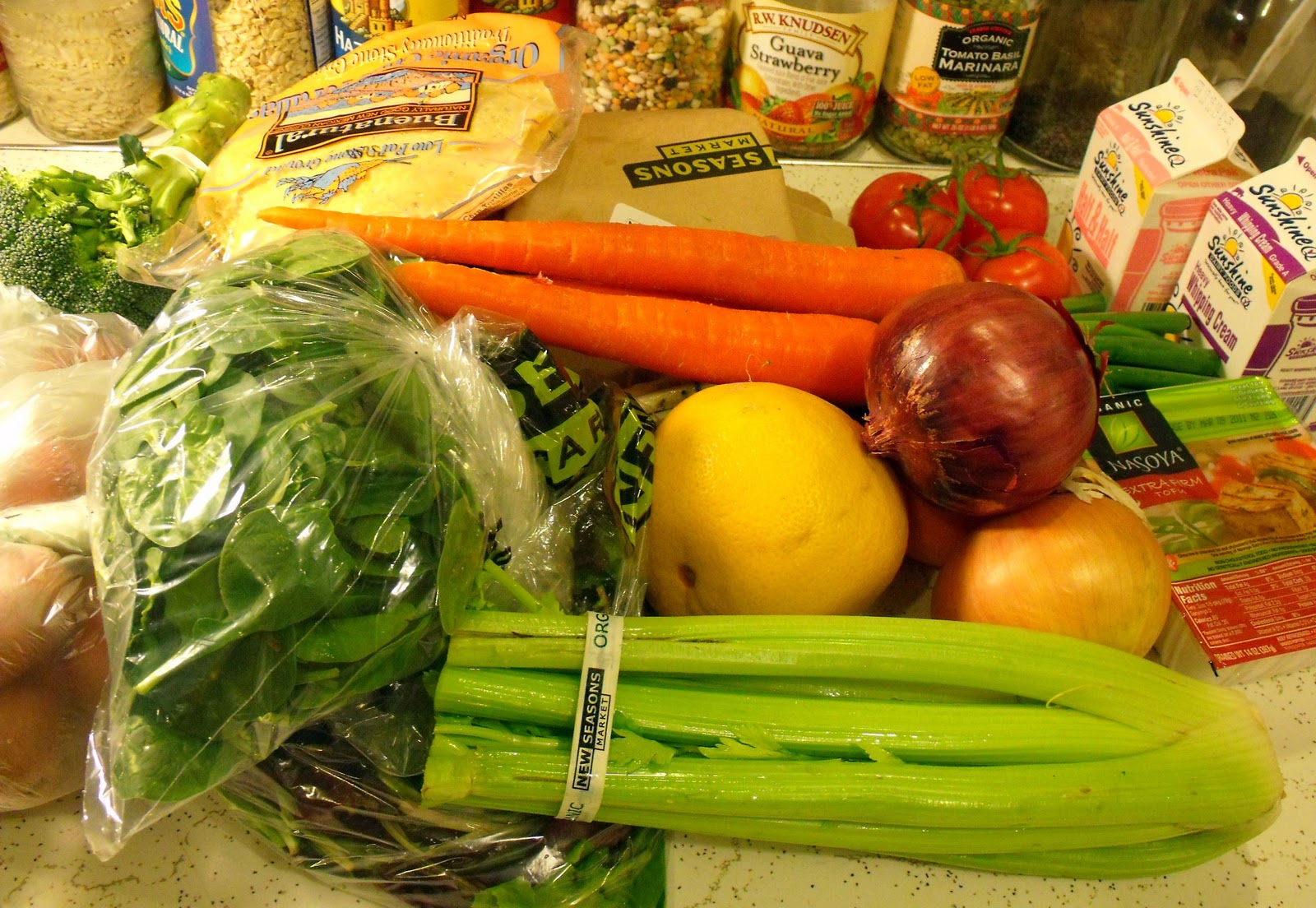 Ideally, I like to take one of my two days off each week and cook up a big meal of something, whether it’s a hearty soup, a casserole, a big pasta salad — something that will yield 3-4 meals worth of food, that I can bring to work all week as lunches or dinners so I don’t have to think too hard about how to feed myself that day as I’m inevitably rushing to get ready to go to work each morning.
One of my favorite versions of this is the big curry, with a huge pot of brown rice on the side.  It’s hearty, it’s healthy, it uses up lots of veggies, it takes like five minutes of prep work, only gets two dishes dirty, packs easily into Tupperwares and can be reheated in my makeshift double-boiler system at work (i.e. putting the meal into a big mug and putting it in my electric tea kettle after I’ve boiled a batch of water and then unplugged it.  It works remarkably well).
So that’s what happened this week.  For the brown rice, I usually make a big batch (1.5 cups dry brown basmati — this yields a ton of rice).  This gets thrown into a pot with double the amount of water, a few spoonfuls of coconut oil, and some salt.  Once this combination begins to boil, reduce the heat and simmer it with the lid on for about 40 minutes or until it’s done. 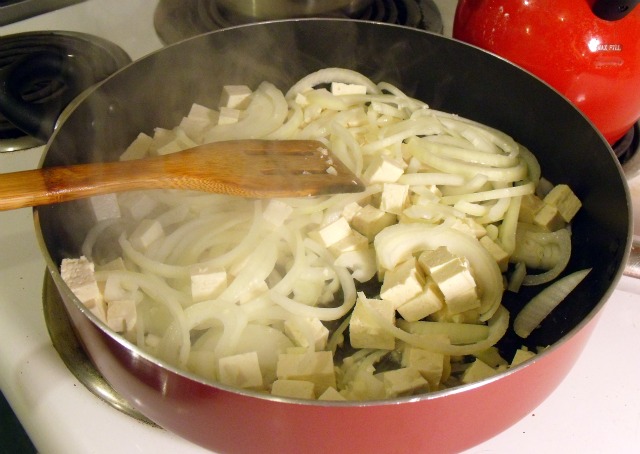 And the curry?  Super simple.  I started by chopping a whole white onion and a brick of tofu, and sauteeing these together in a bit of canola oil. 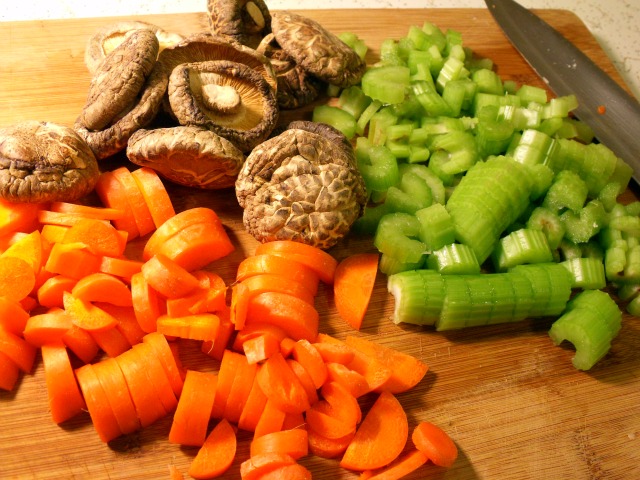 Then, the base veggies.  Tonight, some carrots and celery, and though fresh mushrooms would have been better, I have this stash of dried shitake mushrooms from my big stock-up trips to Fubonn so I went with those as a substitute, breaking them up with my fingers as I threw them in. 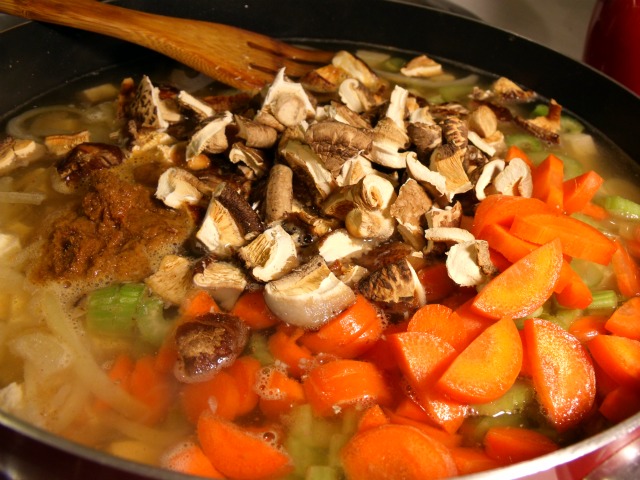 All I added here besides the veggies was a few inches of water, a can of coconut milk, and my favorite curry paste — tonight was yellow, but I have a whole stash of these on hand, ranging from green to red to panang.  These massive tubs are like $3 each at Fubonn, and all you need is a few spoonfuls! 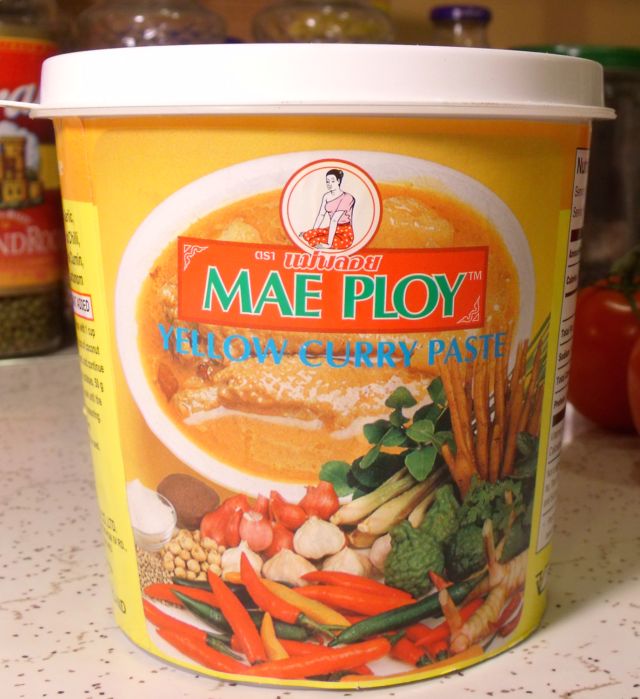 I kept this at a low boil for about 45 minutes, and then added the more delicate veggies at the end: spinach, a couple fresh tomatoes, and parsley. 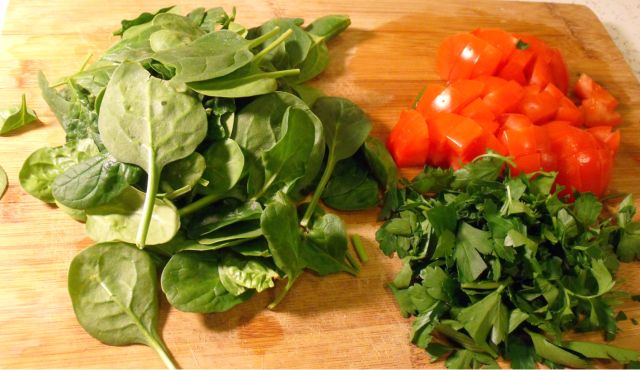 Salt to taste, stir in some Sriracha if you like the spice, and spoon it over the rice and you have a healthy, hearty meal that I seriously can’t get sick of, even after day 4 of this week. 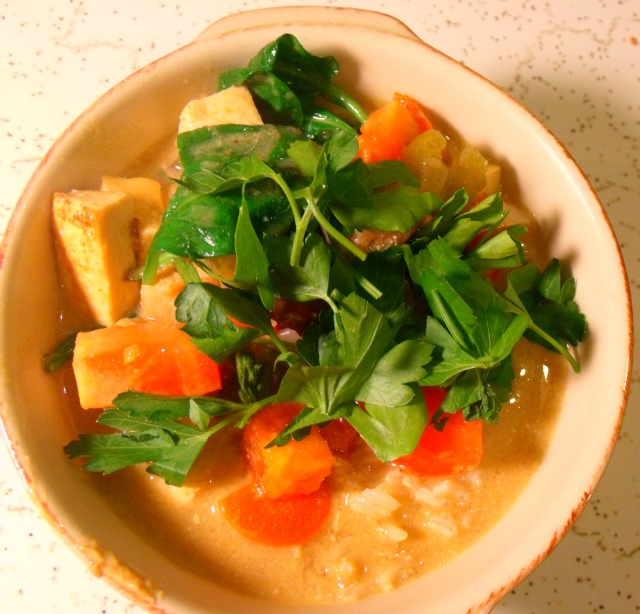