I finally made it to Fubonn this week, and got a few things that have been lingering on my shopping list for months now (brown basmati rice, Tom Kah soup paste, rice vinegar), and of course a bunch of other things that I can’t help but throw in the cart when I’m there.  I can’t attest to their quantity or organic status at all, but Fubon has the absolute cheapest veggies I’ve ever seen — actual good quality Asian veggies like baby bok choy, not the sad looking tufts of greens that call themselves bok choy at regular grocery stores.  Nope, at Fubonn you can get a gigantic bag of about 12 of them for $1.64, and a package of oyster mushrooms that looks like this, for less than five bucks: 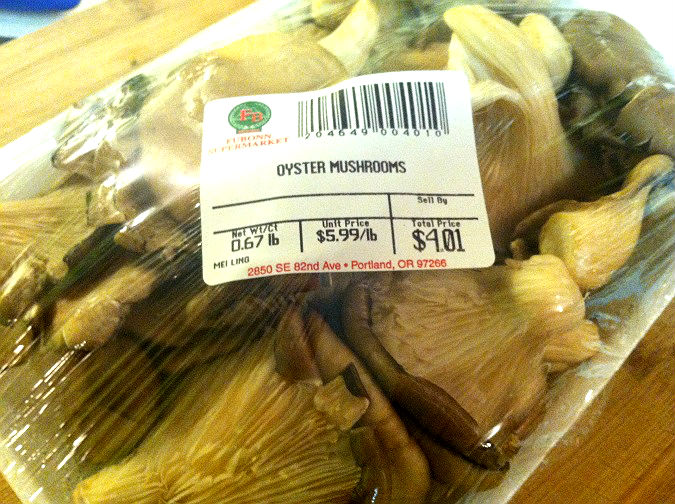 So last night when Jesse texted me on my bike ride home, already 7:15 and saying he was just getting home from work as well and can we do something easy for dinner, I knew it was a stir fry kinda night.

I had a package of tofu sitting in the fridge, which was just the ticket because it’s been a very meat-heavy week, between leftover pork shoulder roast, and barbecued chicken drumsticks.  So right when I got home, while I gathered and assembled all the veggies I’d be using, I quickly cubed up the brick of tofu, melted some coconut oil and black bean paste in the skillet, and started frying it up. 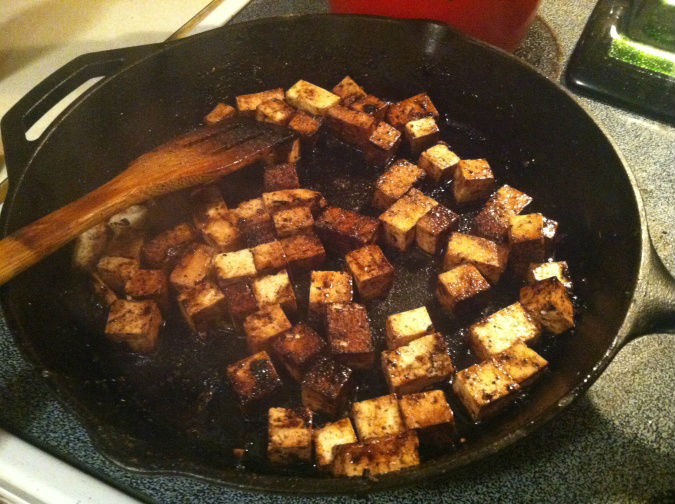 I like to cook my tofu for a long time over medium heat, kind of like caramelizing onions.  It drives me crazy when tofu is all soft and crumbly and falling apart — I want it firm and crispy and tough on the outside, but without having to deep fry it.  The key is cooking it in a reasonable amount of oil, with a little bit of salt sprinkled on top to draw out the water, for nearly half an hour, but on a low enough heat so that it doesn’t burn.  Canola oil works better than olive oil for making it nice and crispy, but coconut oil is way healthier and works just as well. 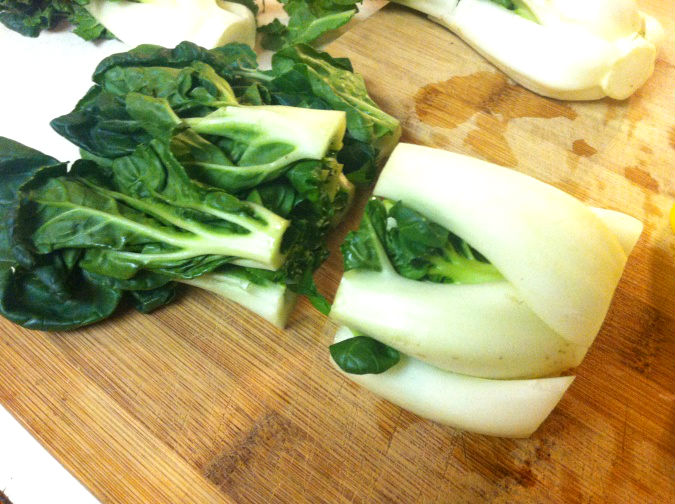 Meanwhile, I took each little bundle of bok choy and separated it — sliced off the closed end so that the leaves would all separate, and then sliced between the stalk and the leaves.  The stalk takes about as long to cook as cabbage, so I wanted to give it a good ten minutes by itself in the wok before the softer ingredients got added, whereas the leaves go in at the very end, so that they wilt and cook just a little bit.

Here’s everybody waiting for the wok to heat up. 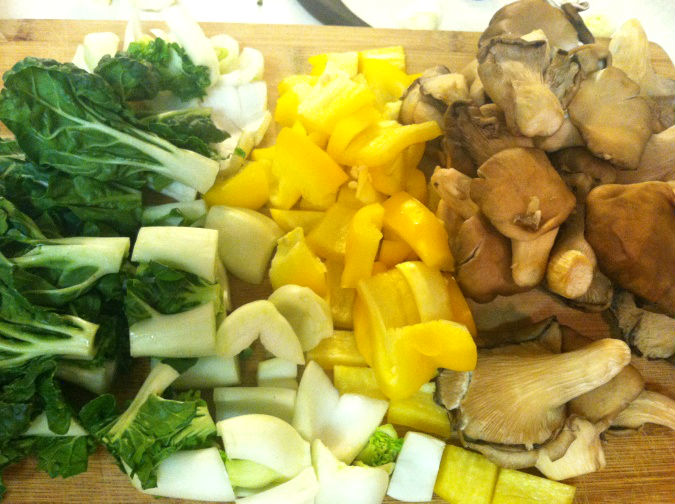 I got a pot of water boiling, and cooked a third of a bag of these Korean noodles (they only take about five minutes), setting them aside to cool.  Why Korean noodles you ask?  Well first of all, I love their texture — they are thin and super stretchy, like nearly unbreakably stretchy, and get all glassy once they’re cooked, absorbing the sauce better than rice noodles, in my opinion.  And the best part?  They’re made from sweet potato starch rather than wheat, so they’re totally gluten free! 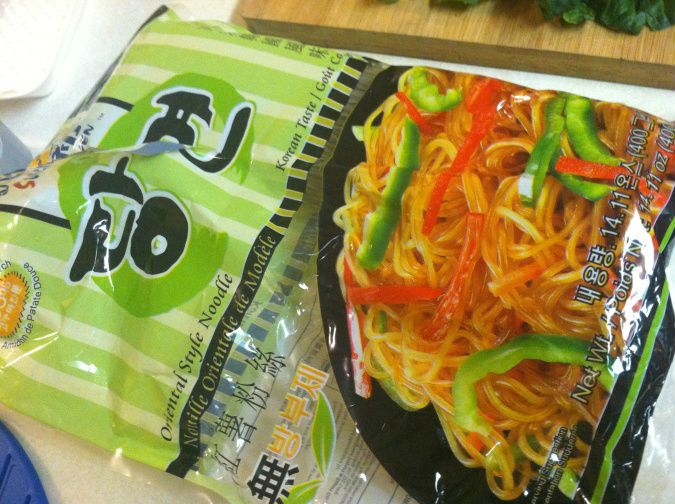 This may be a thing for the next little while…I’ve been trying to be gluten-avoidant for the past six months or so, but really only half-heartedly.  I decided this week that I’m going to give it a more serious go — not in any sort of Celiac or nit-picky way…I’ll probably still use regular flour to thicken sauces and all that, but I’m going to forego the obvious culprits like straight up wheat pasta.

So, back to the wok.  I started stir-frying the mushrooms and bok choy stalks until they were soft, then added the bell peppers.

As for sauce, we had picked this up earlier this week during a Trader Joe’s frenzy. 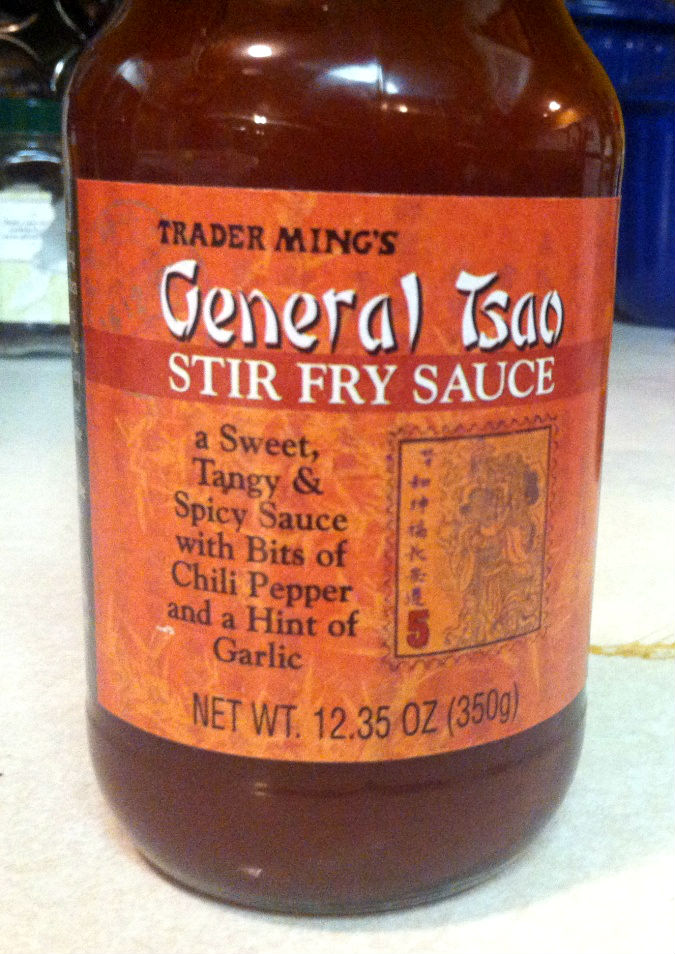 I dipped a finger in to try it and wasn’t crazy about it — it was super sweet and smelled more like barbecue sauce than an Asian stir-fry, so I just started with a few tablespoons as a base, then doctored everything up with soy sauce and a bit of fish sauce.  I should have added chili paste in at the point, too, but I overlooked it and ended up stirring it in to my own personal plate, which still worked.

At the very end, I added the noodles that had been cooling until they had been coated with the sauce, chopped up some cilantro for garnish, and served it up! 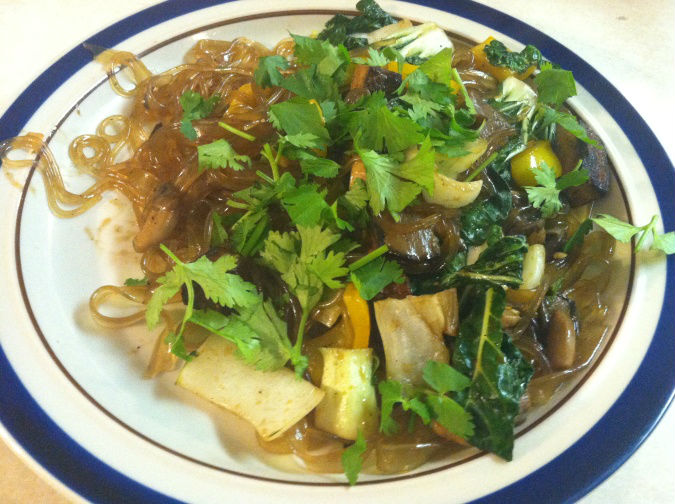 Tuesday I found myself in need of a potluck offering in a pinch.  See, about five months ago, nine of my friends and I bought tickets to see Roger Waters perform The Wall, live at the Rose Garden.  It was one of those things that was so far out in the future, we kind of all forgot about it and went about our lives all spring.

But then all of a sudden, here we were at May 22, and it was go time.  Playing event coordinator while I drove back from a relaxing weekend visiting Jesse at his job site in Hood River, baked some fresh bread, got my house in gear for the week, and took a quick house-hunting tour around Southeast, I manifested a plan that involved a quick potluck dinner & drinks at our friends’ new house that they just bought and moved into.

I was really aiming for low impact here — not just because I’d already pretty much hit my grocery budget for the month, but because this week has been so jam-packed I literally didn’t think I had a window of time to even swing by New Seasons on my way to grab the fixings for a cheese board, my go-to easy potluck contribution. 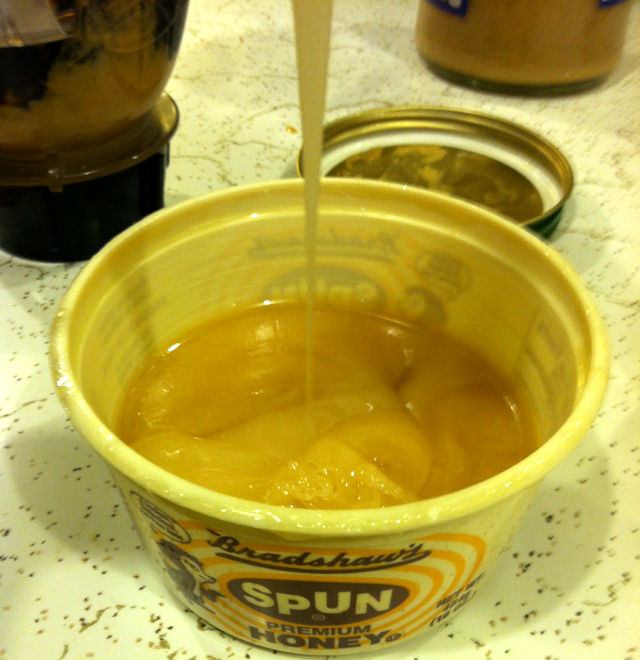 No, this was one of those times I’d have to really get creative with my cupboards and come up with a contribution that was 100% already in my kitchen, including some humble cocktail fixings that I’d culled from the odds and ends of bottles from my bar and stray single cans of all-natural soda to use as mixers.

And proudly, I realized as I took an initial survey of my freezer and pantry, I could totally pull off a hearty, summery soba noodle salad without setting foot outside my house. 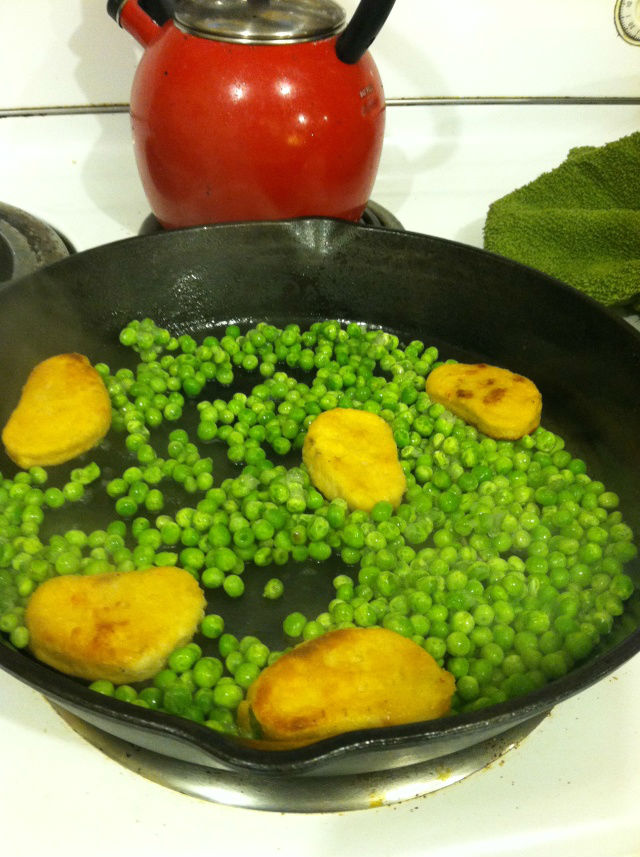 Drawing my inspiration (and the peanut sauce recipe) from this salad, I pulled out the blender. 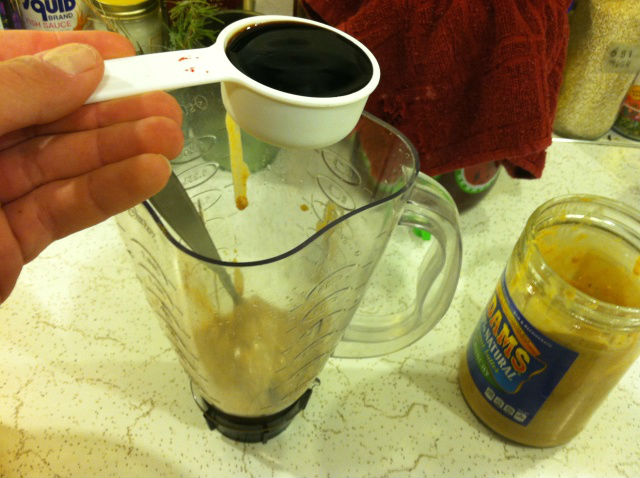 As usual, Deb has concocted the perfect balance of sweet, tangy, refreshing, and delicious, so I didn’t do a single thing to change this dressing.  I just threw all of the following into the blender, and hit “go” until all the ingredients were perfectly smooth and incorporated: 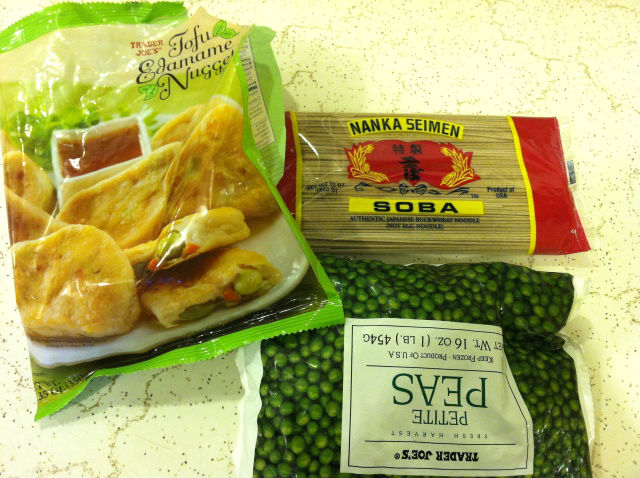 I love how cheap these packages of soba noodles are at Fubonn, and so I buy them by the handful whenever I’m there.  Today, I cooked up a full 12 oz. package.  The peas and TJ’s tofu edamame nuggets were my freezer finds, that would round out the body of the salad. 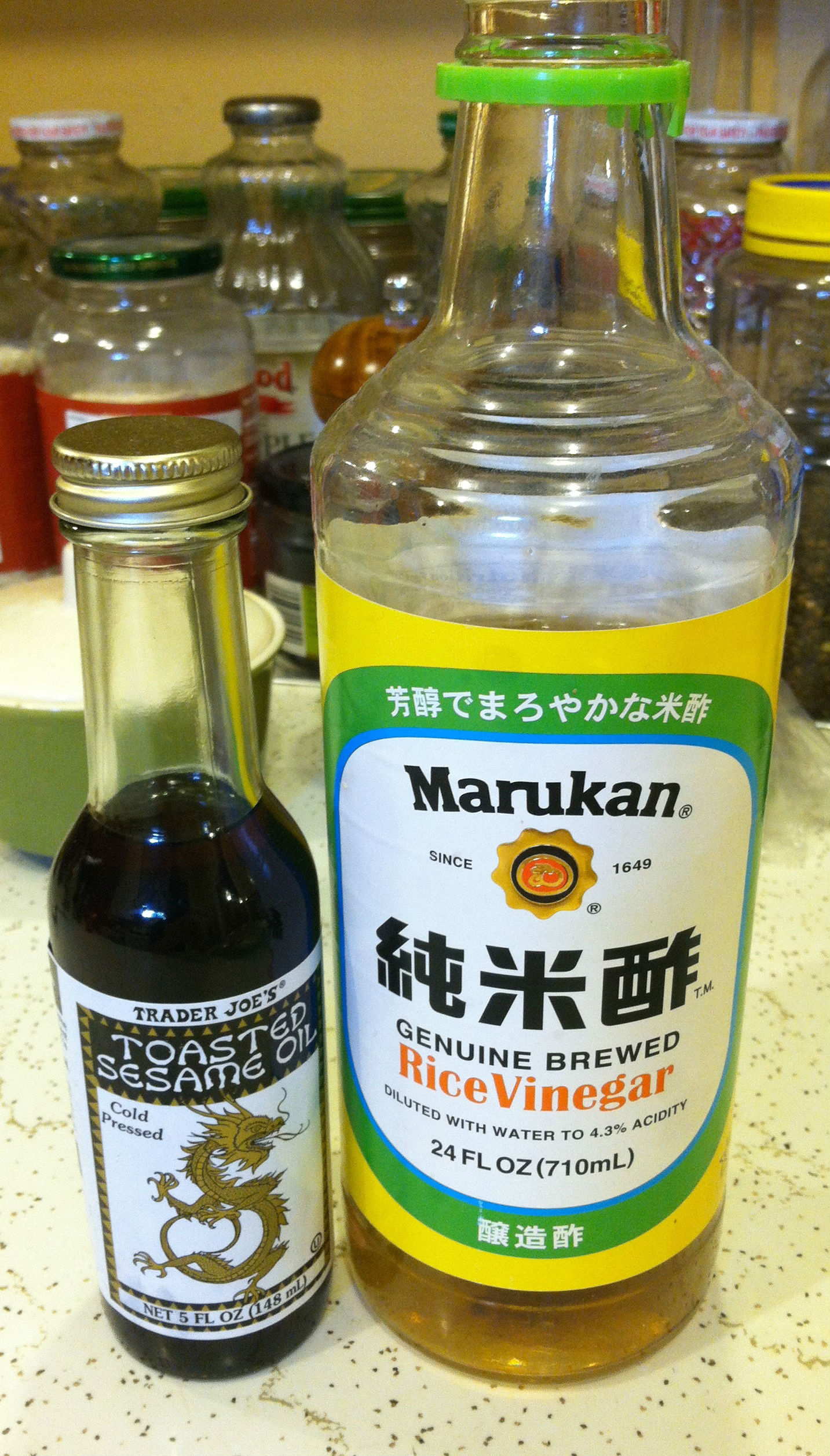 I only had about five of these nuggets left, so I fried them up in the skillet, along with about half the bag of frozen peas.  I chopped the nuggets into little pieces, stirred these into the salad along with a couple of chopped scallions, and poured the dressing over it all, stirring it in until all noodles were coated. 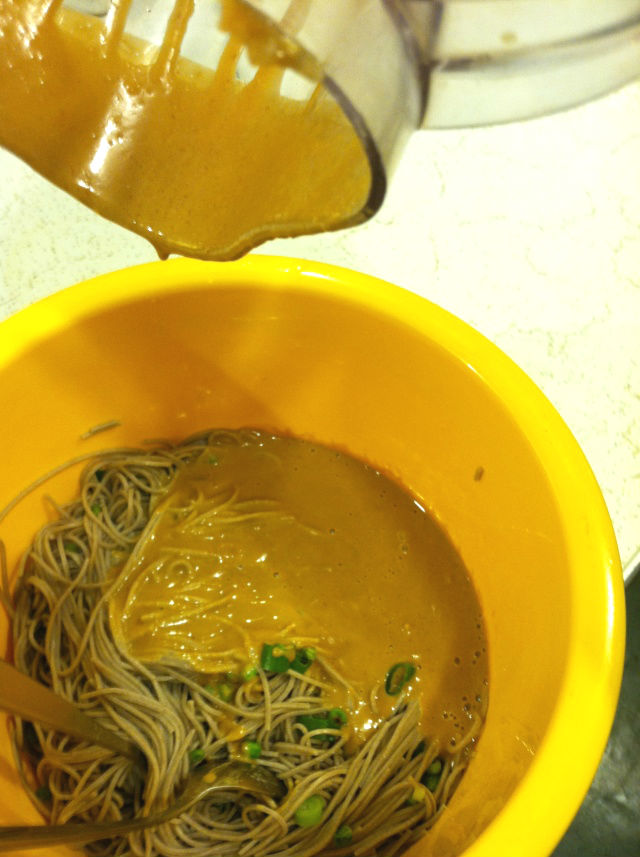 This whole meal took about 25 minutes to make, and after chilling in the fridge for a few hours before heading over to Andrea & Teran’s, made for the perfect pre-show dinner. 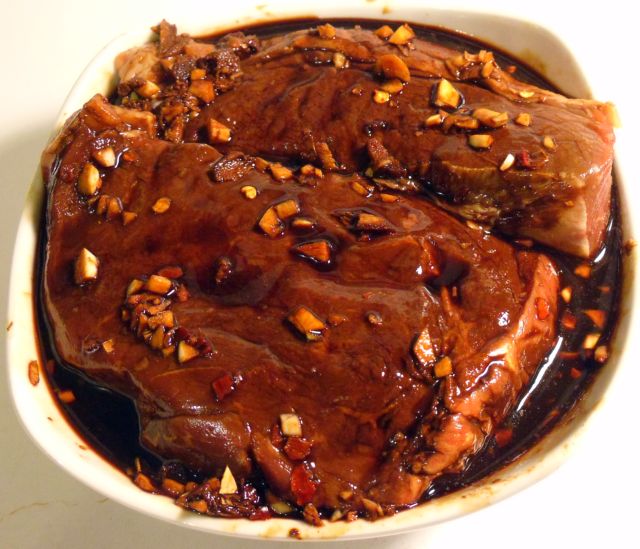 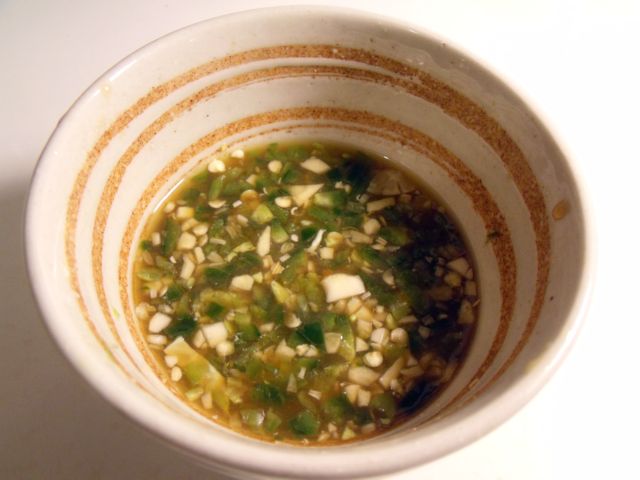 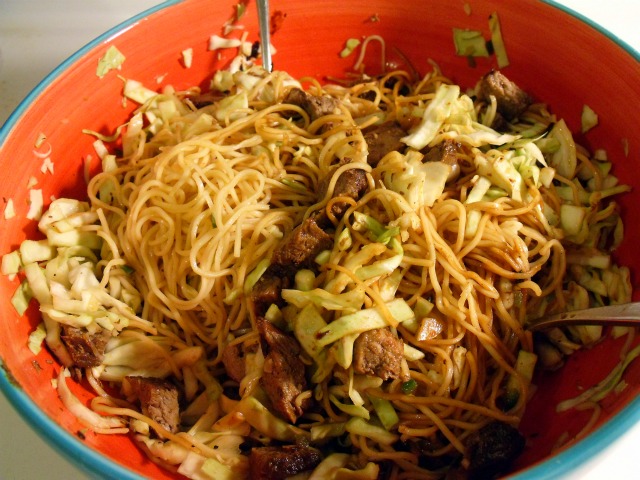