A delicious, hearty way to eat your veggies in the winter! 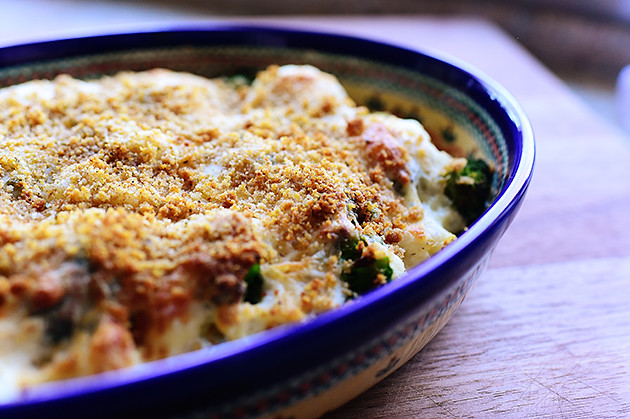 This was totally on a whim, and in celebration of the fact that I got my Dutch oven back this week — totally forgotten about, having lent it to a friend last month.  I was in the mood for something light, something that could make use of the veggies in our fridge, and something that would last for the rest of the week.

Oh, and something that would let me finally break open that immersion blender we bought back in December!

These kind of soups really couldn’t be simpler: start by sauteeing some onions and garlic in the bottom of whatever soup pot you’re going to use, add veggies and spices, sautee some more, add broth and cover, simmering until all the veggies are fully cooked.  Blend, garnish, and serve!

In this case, the veggies were cauliflower (of course), celery, a couple of sweet potatoes, and a jalapeno pepper.

The spices were cumin, turmeric, curry powder, coriander, and half a can of coconut milk, garnished with fresh cilantro.

I was impressed by Jesse’s relenting on the idea of cooking up some chicken breasts on the side, saving those for another night, and letting this be a totally meat-free meal, quelling the craving for something hearty and savory by adding a little quesedilla on the side — a fried corn tortilla with a little pile of olive tapenade, broccoli slaw, fresh mozarella, pesto, and a drizzle of sriracha.  Of course, he ate half a package of peanut butter cookies later that night, but still. 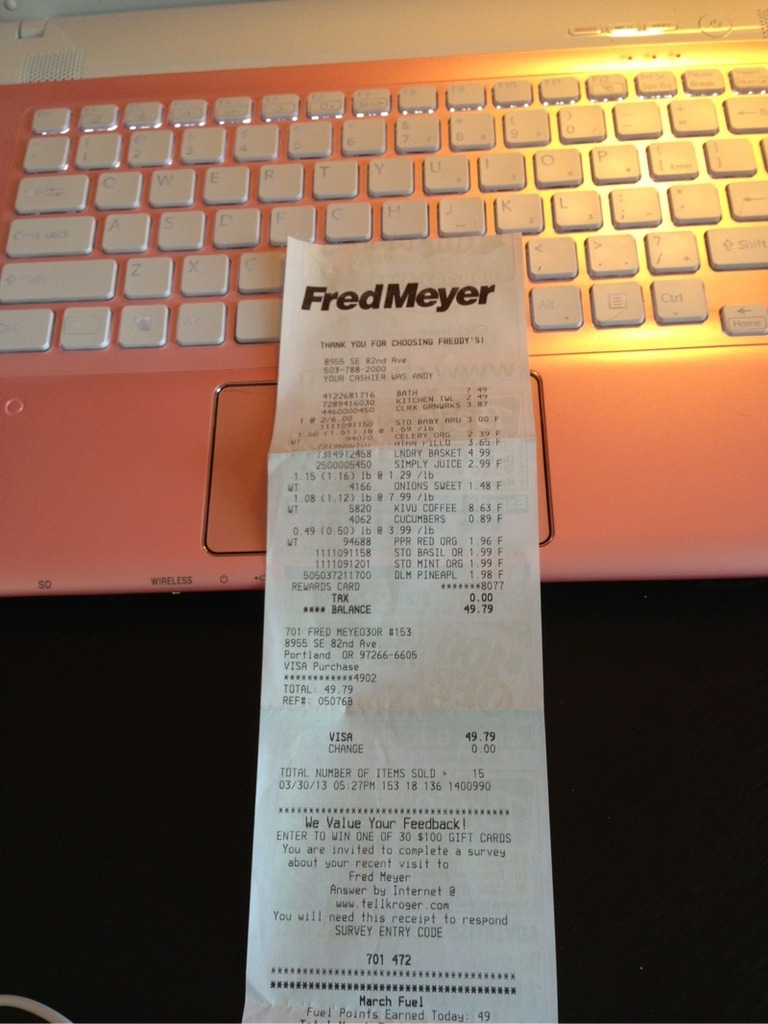 Oops!  I’m realizing some non-grocery items snuck in here — kitchen towels and a laundry basket and whatnot.  Oh but that phyllo dough you see?  I used it to make a delicious spanikopita that I served last Saturday when we had two of our good friends over for dinner, alongside some home-smoked salmon.  These were just the leftovers!: 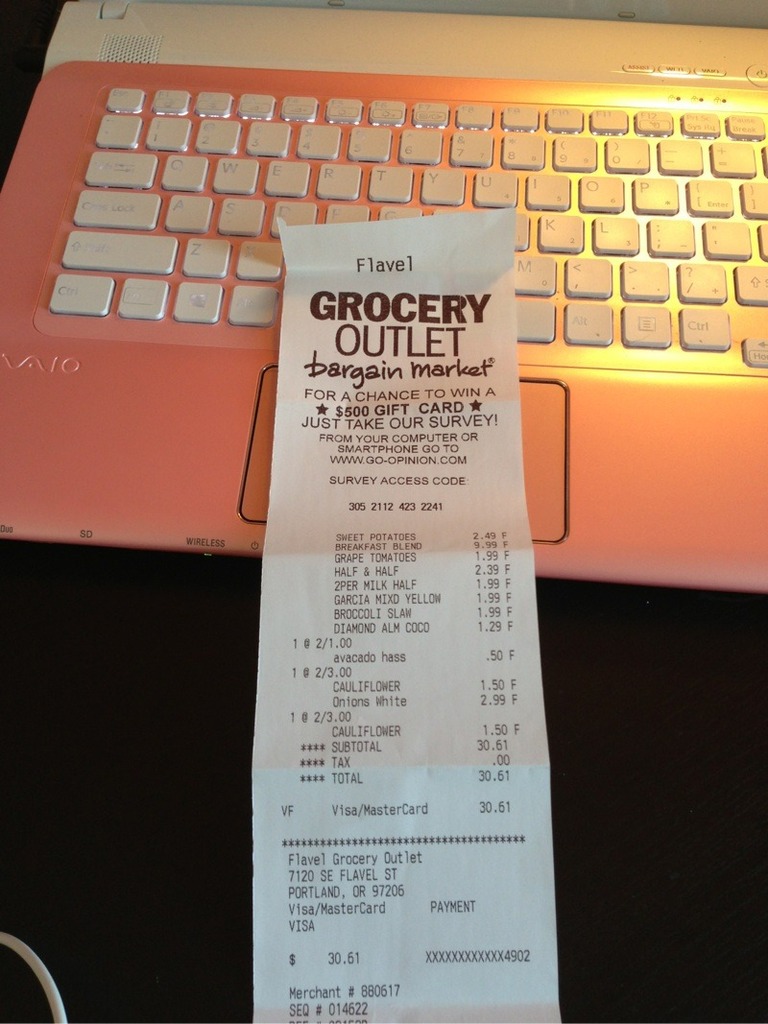 That almond milk I’ve been enjoying over my gluten-free Mesa Sunrise in the mornings!

This has got to be a sign.  When I sat down Tuesday morning to eat my breakfast of a fried egg on a toasted English muffin with TJ’s eggplant spread and a kale-carrot salad, this was one of the many abandoned browser tabs I’d left open the week before, for perusing while I feasted (since one of my favorite things to do is read about food while I’m eating food).


I had just realized about twenty minutes earlier that grocery shopping was one thing I could check off my list for this weekend, after tallying it up and realizing that I only have about $14 left for the rest of the month’s groceries.


No worries, though.  If you’ll recall, I’ve got some food on hand that I can delve into, keeping the grocery runs to produce-only.  Plus, last week I’d stocked up on some hearty, keep-well veggies that will easily last a week or two — things like a head of cauliflower, a bag of “Southern greens,” some fingerling potatoes, carrots, sunchokes, and a head of lettuce that are all still left in the fridge.


And with a loaf of whole wheat rosemary herb bread rising as we speak, I know this means my lunches this week will be more sandwich-oriented (roasted eggplant and cheese!  Egg and fresh lettuce!  Tuna and nori!), and my dinner simpler.  Probably would have been the case anyway, given that this week not only do I have V-Day dinner with the girls, but am either hosting Knit Night or teaching a class all three weekday evenings.


So when I started reading this recipe, and remembered that chickpeas are one of my favorite foods in the world, I jumped up and got some soaking right away.


And then, I kept reading, only to discover that she recommends accompanying your chana masala with this cumin-bathed cauliflower and potato roast (which in my world, will be supplemented by sunchokes, a.k.a. potatoes with a little bit of an attitude).  It’s like she was playing Iron Chef in my fridge or something.


And then, I remembered that, for no particular reason, the night before I’d used the remaining tub of Greek yogurt in my fridge, that I had been worried would go bad, to make a big batch of cucumber raita.  For real??  The universe is trying to tell me something, clearly.


I’m going to spare you my recipe and just send you right over to Smitten Kitchen’s instead, because not only did I forget my camera at work this week and my iPhone shots of this culinary experiment are so woefully grainy and overexposed I can’t even bear to post them online, and because while trying to drag and drop a different photo in here (note to Bloggers: don’t do that), I lost the entire post I’d just written, and anyone who’s spent 45 minutes writing something and then lost it knows that round two always feels just a little bit bitter and despondent.


Basically, both of these dishes are amazing, miraculously use up exactly the vegetables that I have lying around in my kitchen at the moment, and have already done a fine job of carrying me through my work week, and probably well into the weekend, without spending a dime on groceries this week.

My other fellow Project: Food Budget-ers: