This was a meal that was born out of my perusing my Pinterest to-cook list and choosing two seemingly unrelated dishes, but once I cooked them on the same night, realized they form a perfect symbiosis, and that these two dishes must always be made at the same time, from hereon out.  Here’s why:

I started by dredging the chicken breasts in a simple mixture of flour, salt, and herbs on a big plate.  (I went with bone-in, skin-on chicken breasts instead of thighs because we’ve been doing a lot of the drums-and-thighs lately and Jesse’s not so into picking meat off of bones), and browning them in coconut oil in the skillet.  Once both sides had been nicely browned, I transferred the breasts to a separate skillet, leaving the drippings in the original skillet, off the heat.

In the meantime, I prepped the domino potatoes, which — beautifully complicated as they look — really only require about two steps.  First, I made some clarified butter by melting a stick of butter in a small saucepan, and cooking it down until it had turned a nice rich brown and the milk solids had separated, at which point I strained it into a little dish for brushing on the potatoes later.  Then, our mandoline finally got to make its debut appearance! 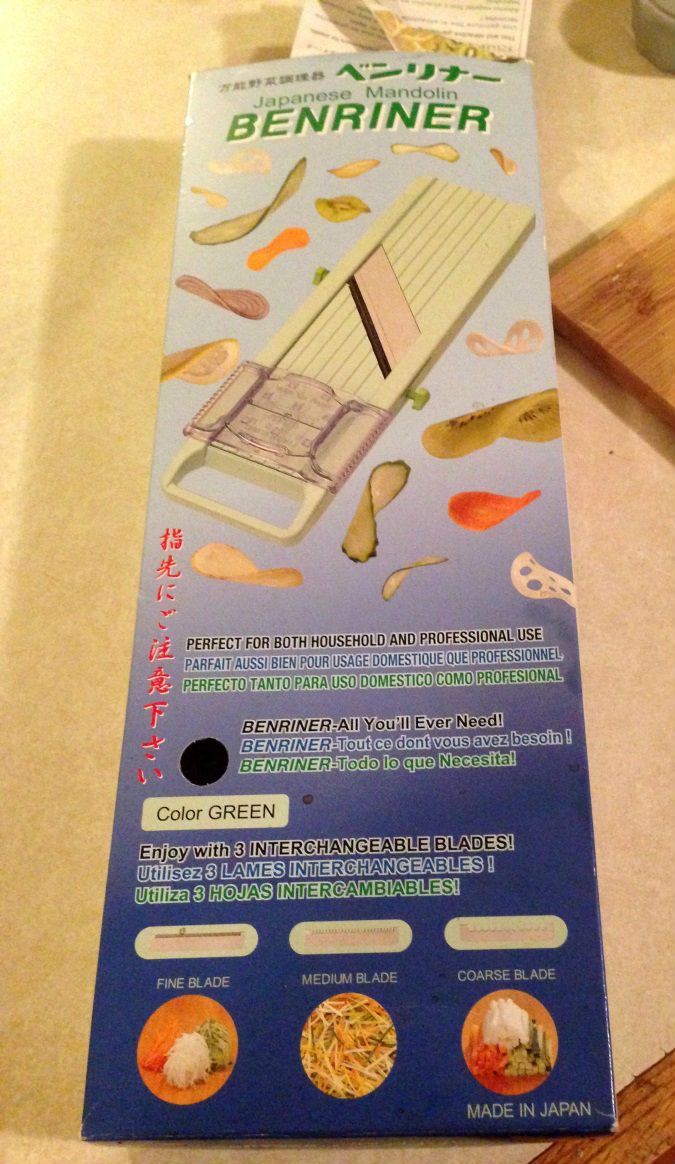 I have always been wary of the mandoline; it inevitably feels like so much more effort to set up, take apart, and clean than it is ever worth, and when faced with this task, I always find myself willing to settle for uneven matchstick carrots.  But, for the record, this mandoline is super easy to both set up and clean, and really made this dish what it was.  In no other universe could I have done this by hand in only five minutes: 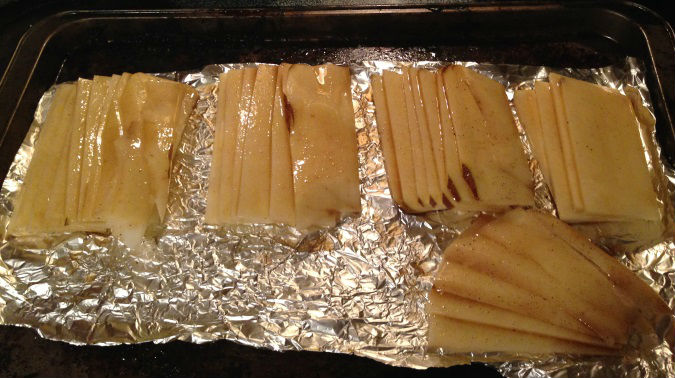 All you have to do is slice off the round ends of 4 Russet potatoes so that they’re rectangular, then slice them into these perfectly thin little “dominoes” which you then fan out on a baking sheet, preheat the oven to 400 degrees, and then baste with the clarified butter and sprinkle with salt — in this case, Magic Unicorn salt — before popping them in to bake for 40 minutes. 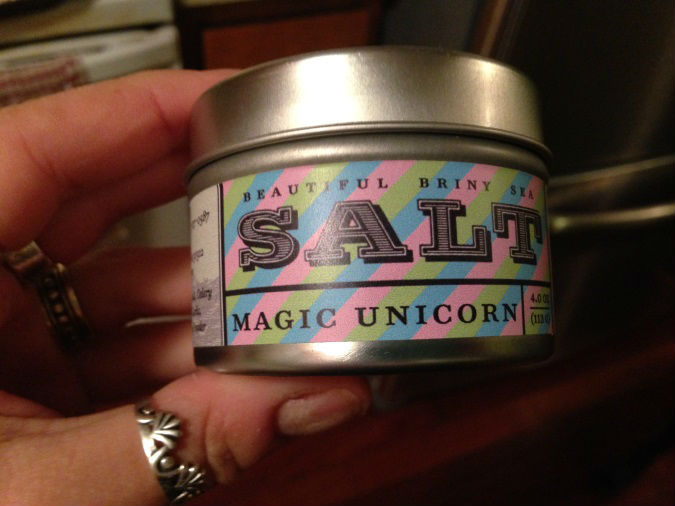 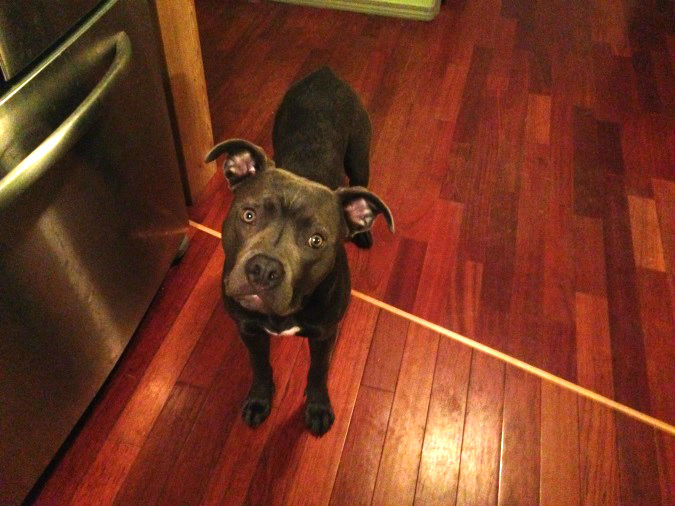 Okay, so those guys are baking in the oven, and if you’re more efficient than I was on this evening you’ll pop that waiting skillet of browned chicken in there at the same time so it will finish cooking (if you used thighs you may not need to do this?  It definitely took the large chicken breasts at least another 30 minutes to cook all the way through, which I hadn’t considered until the potatoes were just about done).

While the oven is taking care of both of those, I reheated the skillet that had the leftover chicken fat from earlier, and sauteed half an onion, a few cloves of minced garlic, and a few giant handfuls of chopped mushrooms with some salt.  On a whim, I also threw in the leftover flour/salt/spice mixture that I had used for the chicken, coating the veggies so that once I added the liquid, this gravy would be nice and thick.

Once everything started to sizzle I poured in some white wine to deglaze the pan, let that simmer for a bit, and then added a few splashes of this, which had played a starring role in some scalloped potatoes I made last week. 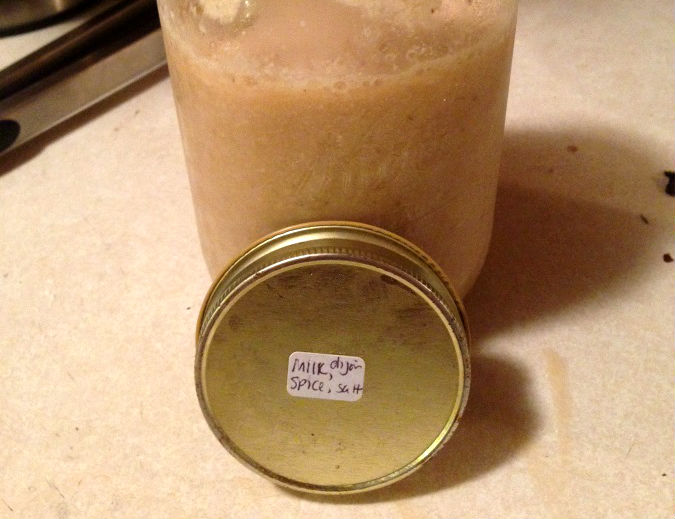 According to my slapdash label — milk, dijon, spice, and salt — this seemed like a perfectly complementary savory liquid to add to the mushroom gravy while the chicken continued to cook.  And trust me, it was.  (This is why our fridge is half-full with random jars and tubs of marinades and sauces; if it’s already been used to infuse one fantastic meal, chances are it can only be better the second time around.  I can only guess that the starch from the scalloped potatoes had something to do with the wonderful finished texture of this sauce…)

Be patient, use a meat thermometer, and if you’re lucky, you’ll have just enough time left to throw together a quick salad, so that everything comes out of the oven and off of the stove looking like this. 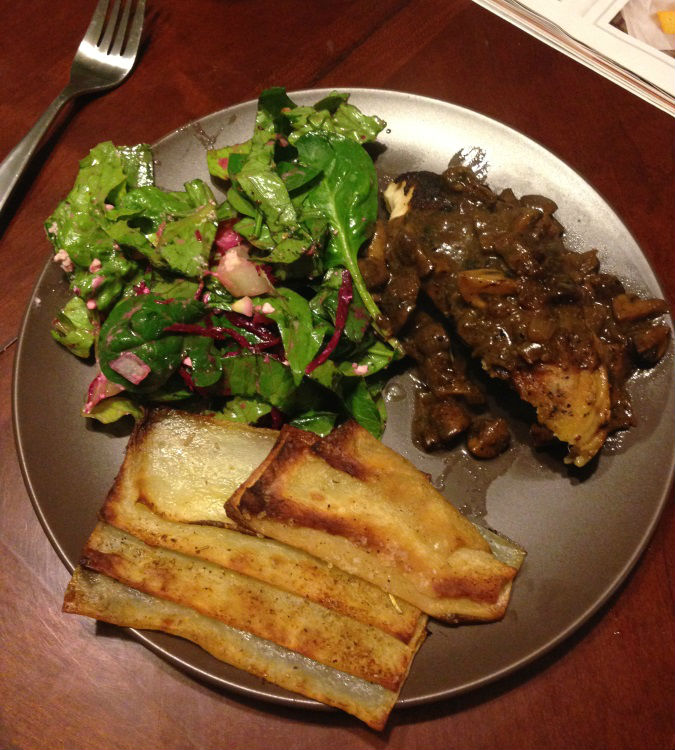