All right, back in the swing of things.  After a fantastically fun housewarming party on one of the first super hot, sunny days of the summer, and then a relaxing evening of Papa Murphy’s and Redbox movies on Jesse’s couch, I finally had an old school, productive Monday/Tuesday “weekend,” where I knocked out a slew of errands like getting my car cleaned, oil changed (and Jesse even changed my brake pads for me over the weekend!  Little Ford Focus is getting in shape!), taking my work computer up to Jantzen Beach to have the hard drive replaced, going to the gym, getting ahead on my transcription for the week, picking up my new car title from the post office, making a yarn deal out in Lake Oswego, and compiling a comprehensive list of everything in my house I need to pack — either now or later — before the big move. 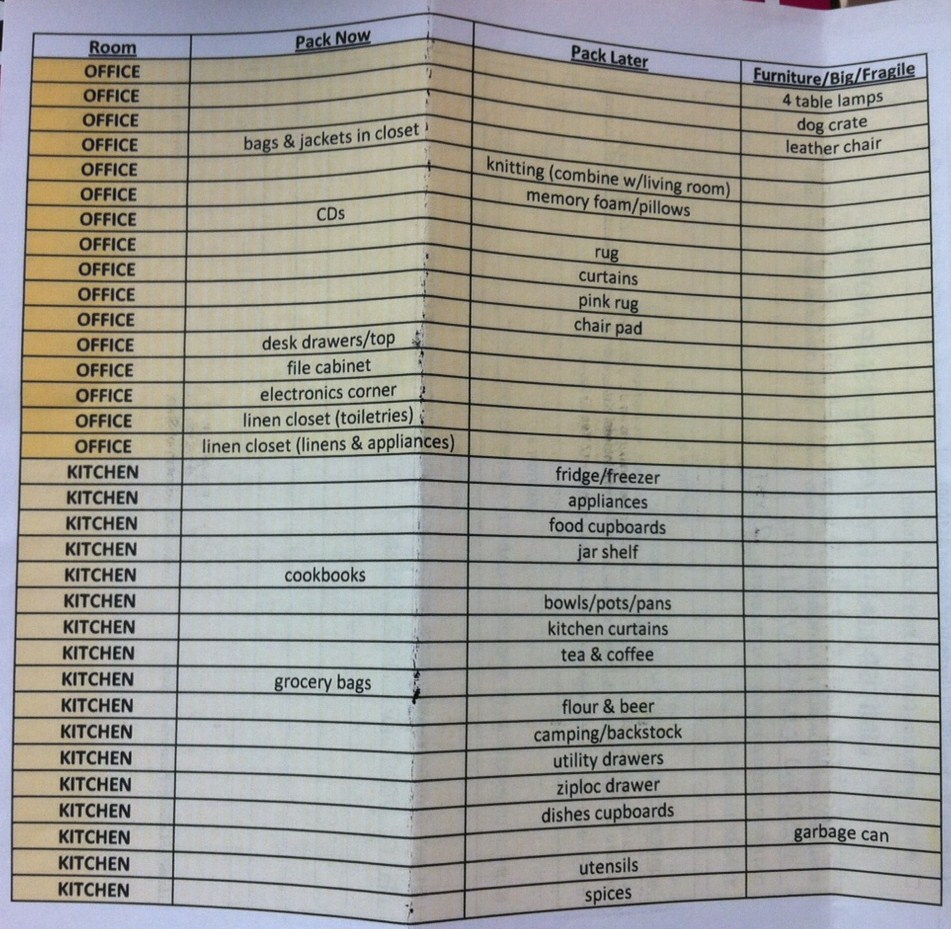 And then I cooked all my food for the week!

I’ve started a Pinterest account — not because I actually like Pinterest as an addition to the social media landscape, but because my old method of cataloguing recipes I want to try with Delicious was just too dang obsolete.  I’m totally ambivalent about whether people follow me on here or not, because the sole utility it poses to me is that while I’m perusing my food blogs (this is what I do whenever I’m eating alone), when I see something I want to make, I just click a little widget to pin it, and then trust that it’s being saved somewhere.

Then, on an afternoon like Monday, when I want to cook something but don’t know what, I can visit my board and see what I’ve been hanging on to, make whatever I choose, and then delete it when I’m done.  It’s kind of like a big visual to-do list, divorced from my actual to-do list that makes my world go round.

This week, I knew I had a little extra money to spend on some good meat, so I decided to try out The Pioneer Woman’s pork chops.  I’ve never made pork chops before, so this felt sort of exotic.  I also knew that, despite living in a basement, it was summer outside, so I also took a stab at Smitten Kitchen’s Taztziki Potato Salad.  And then some roasted broccoli, because I needed something green in there.  And I love broccoli.

I took Deb’s warning and got the potatoes boiling first, so that they’d have time to cool before going in the salad. 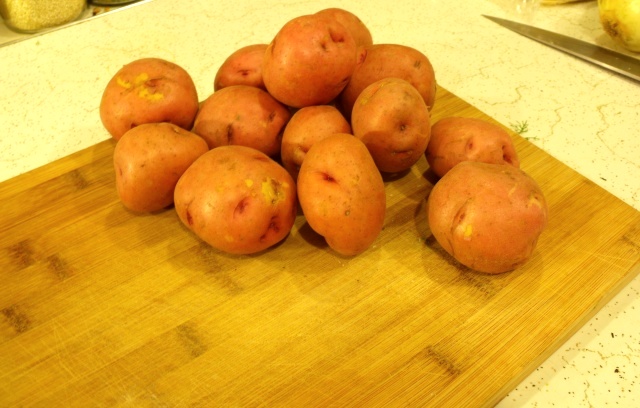 This is about 3.5 pounds of baby reds.

A little proud of myself for having purchased my first ever pair of pork chops, I seared them in some butter and olive oil (after salting and peppering both sides), while those potatoes boiled and cooled. 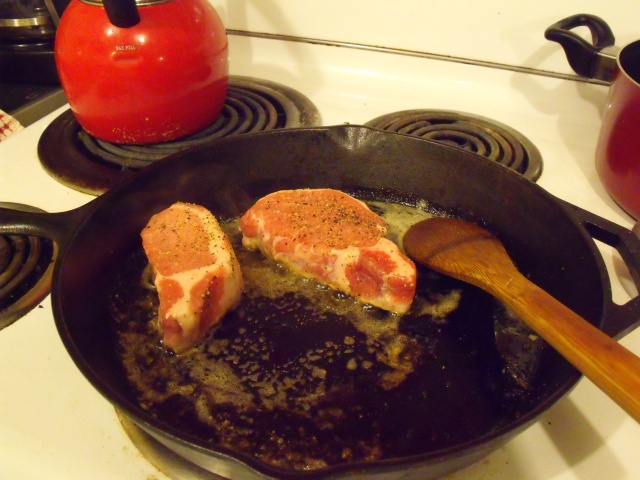 I was only making two chops instead of Rhee’s recommended six, so after browning both sides and removing the meat from the pan, I threw in six whole peeled cloves of garlic, as well as half a yellow onion, slivered, which was my own personal touch.  Once these had cooked for a few minutes I added about a cup of red wine and a bay leaf, letting this mixture reduce down.  Then, I added a little spoonful of Better Than Bullion’s beef paste and some water to turn it into broth, and added the chops back in. 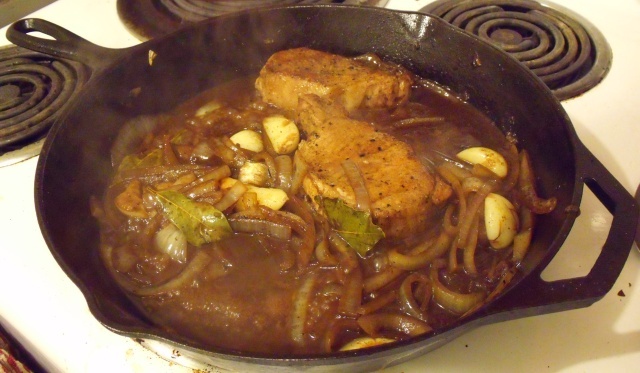 Meanwhile, I was throwing together a quick base for the potato salad.  It all revolves around this. 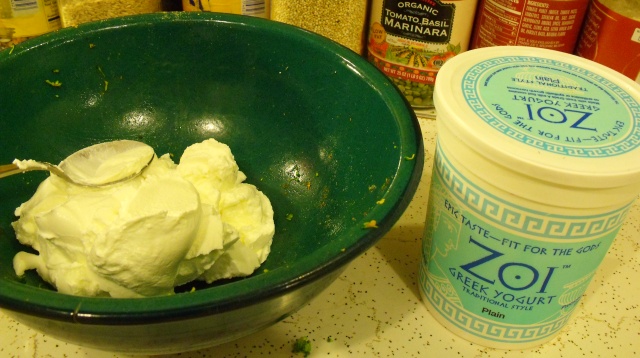 I love Smitten’s idea of using yogurt as the base rather than mayonnaise, because even though I can totally get behind mayo on a sandwich or even in an aioli, I still have a hard time using it as a legit ingredient in dressing.  But yogurt?  Yogurt continues to amaze.  Like eggs, yogurt seems to be able to impress in a myriad of forms, meals, and context.  Salty, sweet, savory…whatever you’ve got going on.

In this case, it forms the creamy foundation for this summery salad dressing, starting with 2 full cups of thick Greek yogurt.  I don’t usually buy Greek yogurt, which seems to be a new craze as of the last year or two, but I can see why it’s perfect for this recipe: even after adding 2 tablespoons of lemon juice and 1 tablespoon of cider vinegar, the dressing is still thick and rich, not runny.  After that, I stirred in half a bunch of chopped dill, 2 teaspoons kosher salt, the rest of my jar of capers, some garlic powder, and black pepper.

Then I took those potatoes from awhile back, cut them into nice little wedges, and let them cool some more while I tossed some big broccoli pieces in a bowl with olive oil, salt, pepper, and curry powder, and then spread them on a baking sheet and roasted them at 400 degrees for about 20 minutes. 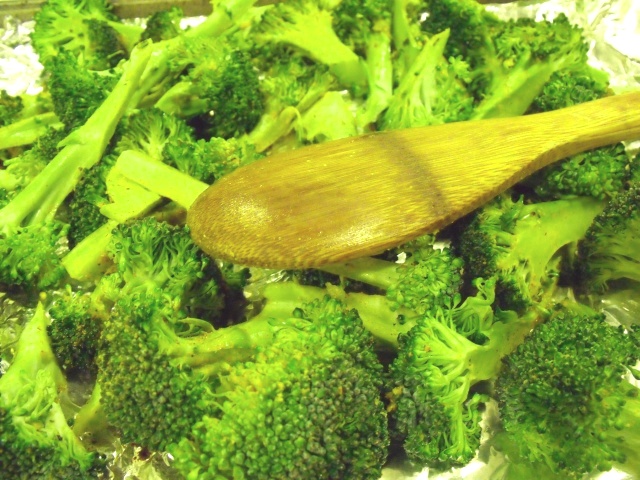 Back to the pork chops.  Once they were fully cooked, I removed them from the pan and continued to reduce the sauce, adding 1 tablespoon of balsamic vinegar and my remaining little square of butter, until it was a thick, rich sauce to spoon over the top of everything. 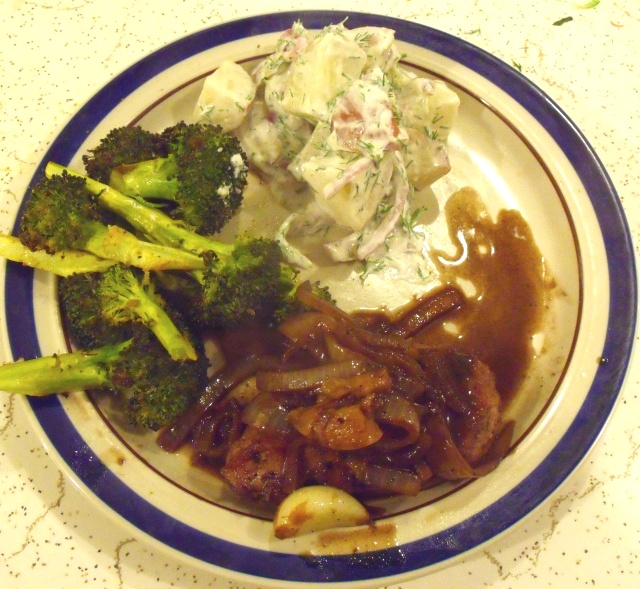 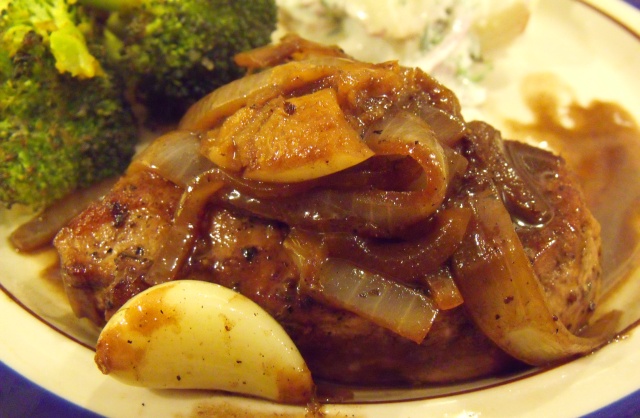 REMAINING FOR THE MONTH: -$12.26 — bummer 🙁  Went over for this month.  The good news is, I have tons of leftovers still in the fridge, so with another, say, $5 worth of veggies, I can definitely sustain for the rest of the month.