Okay, so I didn’t exactly stick to my $5 grocery rule for this week.  This was due to an insane craving for some homemade calzones, fresh salad to offset a Hawaiian barbecue binge I had last Friday night with Jesse and Nate at Noho’s, and an impromptu decision to make some peanut ginger soba noodles with fried tofu, red bell peppers, and bok choy for dinner last night.  BUT, it’s all good, because next week/end is the Urban Craft Uprising summer show, and I guarantee you I will not be cooking next week.  It will instead be a week of calling in the saved-up Groupons, eating take-out, and most likely, the frozen-and-reheated remains of this here meal.  So basically what I’m saying is, by the time the UCU Summer Show is over, it will already be almost mid-July, I’ll have a freezer full of new leftover pizza and bagels from the staff room, and I’ll be back on track.

I haven’t been doing my weekly bread-baking thing lately.  In fact, ever since my cleanse this spring, I’ve been a little disenchanted with bread.  I definitely can’t say I’m “not doing gluten” or anything like that, but it’s been less of a major player in my life.  But, I do still crave foods that fill that bready role — something that I can use to wrap, support, or otherwise encase my food with.  Plus, sometimes I really just want pizza every day for a week, and this somehow feels like a healthier version of that.

And waaaaay easier.  I’ve never really been into homemade pizza — it seems like so much work for something that I ultimately consider to be a junk food that it always feels like a waste to me.  But calzones…calzones are as easy as–nay, easeir than–pie.

So, first let’s talk about the dough.  This meal was one of about six different things I had on my agenda for the evening, so I didn’t want to spend a whole lot of time making a labor-intensive dough.  I turned to my online cooking bible, and lo and behold, she’s got a fantastic recipe for the best pizza dough ever. 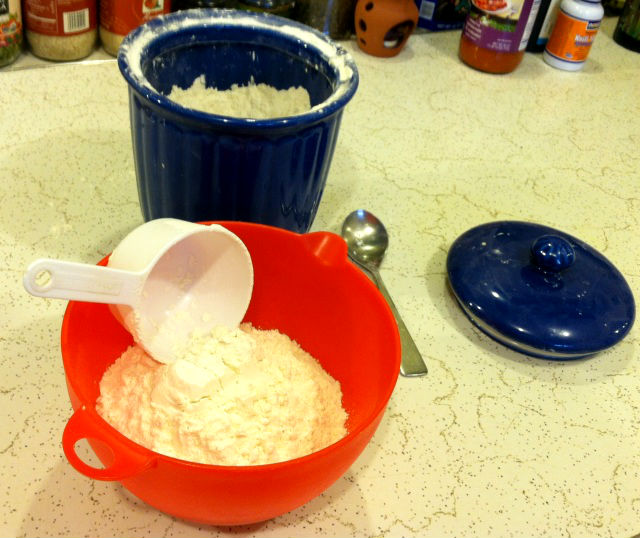 I doubled her recipe, and then made a few little tweaks so that I ended up with the following ingredients sharing a mixing bowl:

(After forming the dough, I then rolled it around in a handful of cornmeal, and the last of the rosemary I had lying around) 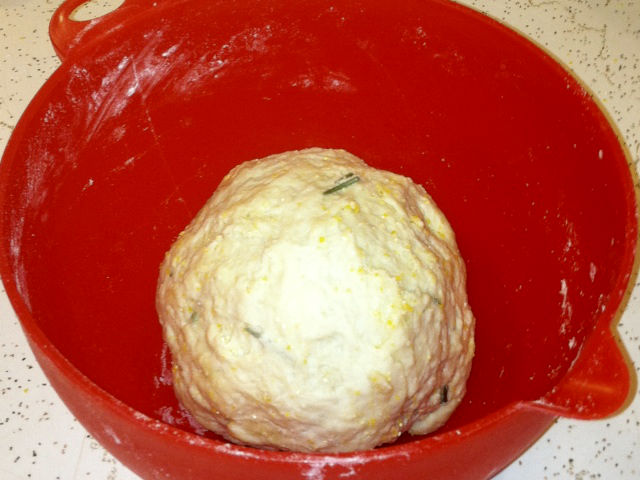 My favorite thing about this recipe is that it uses exactly the right amount of everything.  It’s not one of those dough recipes where you have to keep adding flour to dough it up…and the more water because it’s too dry…and them more flour because it’s too wet.  Nope, these ingredients are in this magical proportions so that, seriously, you just mix them all together with a fork, and then your hands, and you end up with a perfectly clean bowl, perfectly clean hands, and a perfect little ball of delicious dough, that you can wrap pretty much anything in and be stoked about it.  In fact, keep this on the DL, but I already have fantasies of pre-assembling dozens of breakfast calzones for festivals this summer, with eggs and sausage and veggies and cheese, to heat up on Jesse’s camp stove and eat with Kate’s infamous bloody marys in the morning.

So to make the calzone, I ripped off a little chunk of dough after letting it rise for about an hour, and rolled it out into a nice little round.

My original plan was actually to just do something super simple — a basic store-bought tomato sauce, some sauteed mushrooms and zucchini, fresh spinach, and mozarella.  Which I totally did. 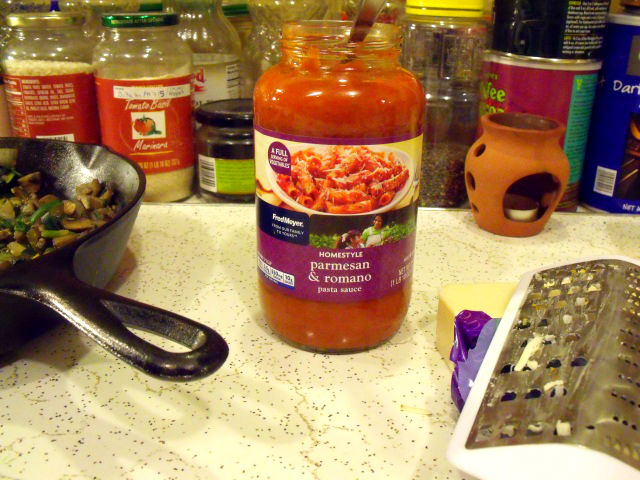 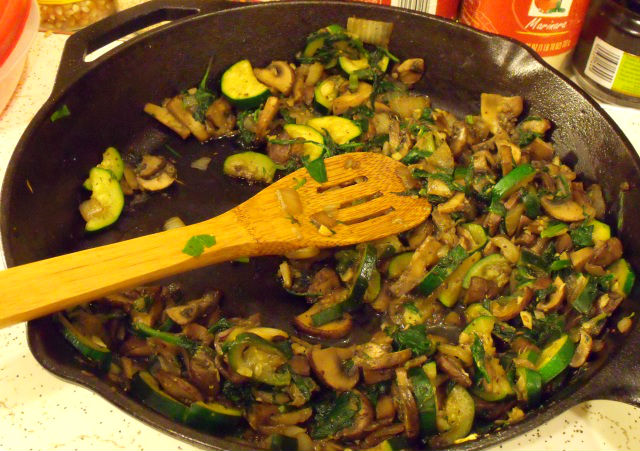 But then I came home from the grocery to realize that I had already set a pot of pinto beans out soaking earlier, thinking I’d make some bean salad for lunches this week.

Knowing these couldn’t go to waste, I thought, there’s got to be some way to turn this into another awesome filling.  Enter the Tex-Mex Calzone.  I went ahead and cooked those beans, and then sauteed them in a hefty amount of olive oil and fresh chopped garlic. 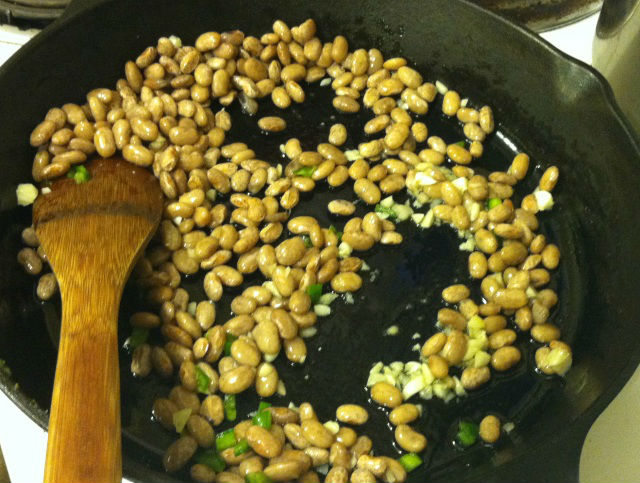 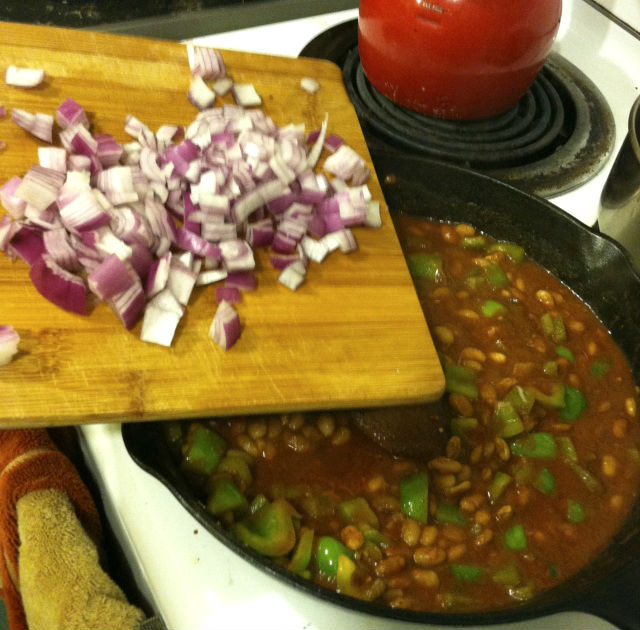 Stirred in some raw red onion, and decide with satisfaction that I had just created this delicious pinto-bean-veggie-enchilada stew.  Which is exactly what I spooned onto my little round of dough after letting it rise for an hour, tearing off a little chunk, and rolling it out as thin as I could with a rolling pin.

Full disclosure: those are not my hands.

(I like to stretch my calzone dough super thin.  I hate those calzones you get at restaurants that have like an inch-wide layer of dough, totally upstaging whatever it’s been filled with.  This gives it more of a thin, flaky crust, which perhaps would technically throw these more in the realm of the empanada, but I’m not going to get too technical here.) 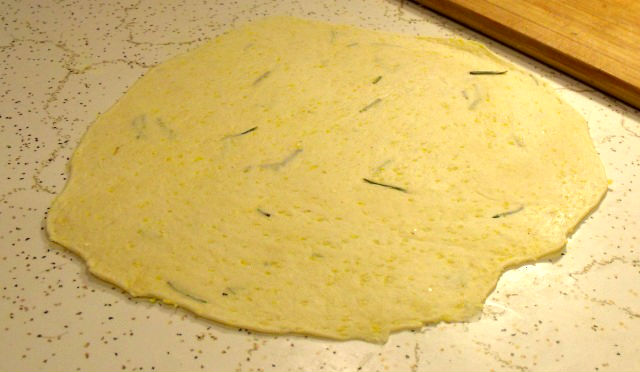 But that’s not all.  Who knows why or how this occurred to me, but I remembered that I had a bag of Trader Joe’s tater tots in the freezer, and threw a couple of those on there as well.

and then pinched all the edges of the dough together, sealing this puppy up, and put it in the oven on a baking sheet for 20 minutes at 350 degrees.  Oh.  My.  God. 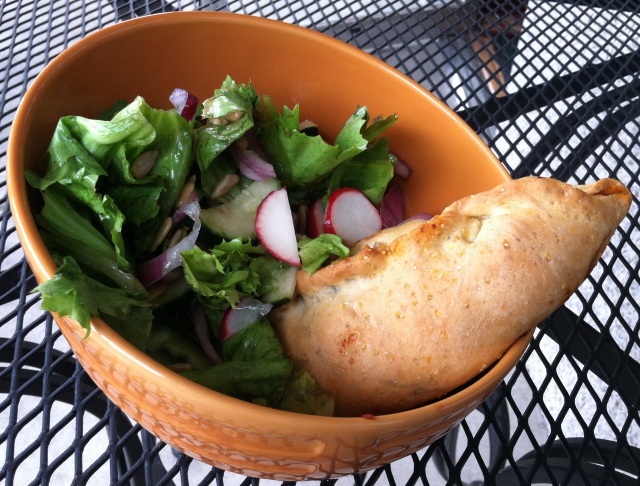 Next week might be too crazy for cooking or blogging, so wish me luck at the show and I’ll see ya the following week!

6 thoughts on “Tex-Mex Calzones, and The Best Pizza Dough Ever”