This is what a fantastic Monday looks like:
Let me elaborate.  I cooked a lot tonight.  I was kind of on a roll with being productive and didn’t want to stop.  And, this way, all I have to do tomorrow during my (faux) day off is some morning transcription, go for a run, and then my favorite: parking it at a cafe on a (hopefully sunny) Tuesday afternoon with some iced coffee, cranking out 4+ hours of UCU and Yarnia work so the rest of my week is a little more manageable.  Especially because this week holds a lot of fun things in store, including one of my favorite bluegrass shows, dinner with friends, and a trip up to Seattle.
So.  I did the obvious.  You know, roasted a chicken, baked some bread. 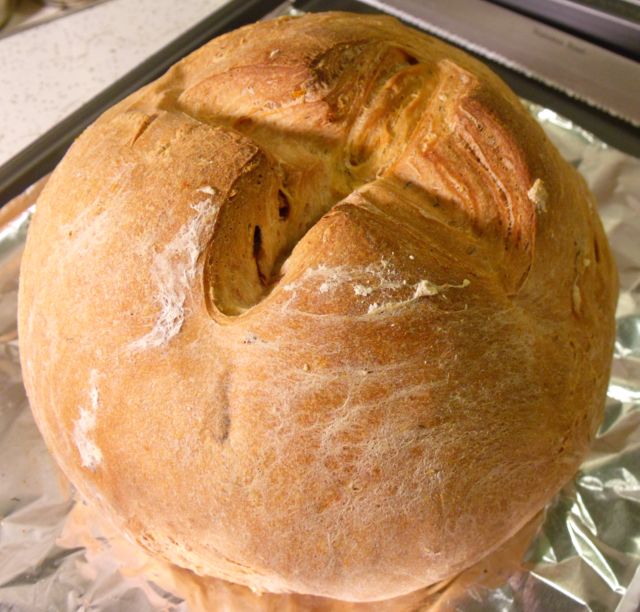 Sundried tomato / fresh dill / half whole wheat bread
But then I also made curried ginger carrot soup, tangy shredded cabbage salad, and black eyed pea salad.  Oh, and soaked and boiled chickpeas for some hummus that I’ll be making tomorrow, and homemade chicken stock is boiling on the stove as I write this (in the same pot I used to make the soup, after transferring the latter to tupperwares for the week.  Genius!)
So first, the soup.  Not sure where I stumbled upon this recipe from, but as soon as I saw it, I couldn’t get it out of my head and even though I really shouldn’t be this excited about soups in April, it’s still like 40 degrees and raining in Portland, so even though I try to defy the weather by incorporating sockless shoes and vests into my wardrobe, it’s still a welcome warming meal.
This soup began by melting 3/4 of a stick of butter in my big soup pot, and sauteeing half a yellow onion (chopped), and a good sized chunk of ginger (minced). 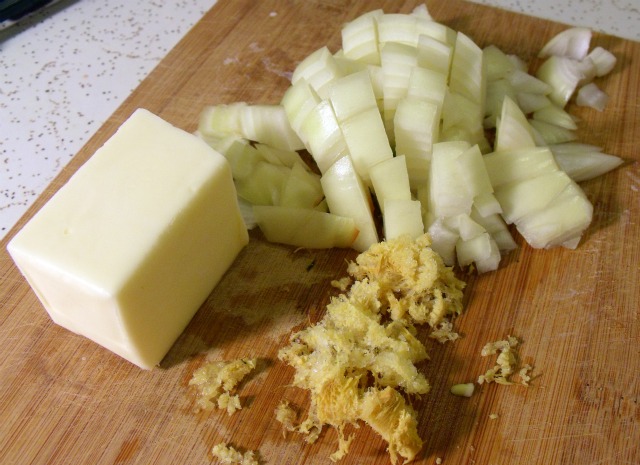 I accidentally stumbled upon a great trick for the ginger, BTW.  I have this part of my fridge that is supposed to “chill” things, but it’s so close to the icebox it really just half-freezes them.  I’ve started putting things like ginger and jalapenos and lemons in there — little flavor punches that I like to buy without clear intention, and that sadly go bad when left in the regular part of the fridge.  And apparently ginger, in this half-frozen state, flakes off like crystal, beautifully and effortlessly, when you pretend to try to slice it really thin. 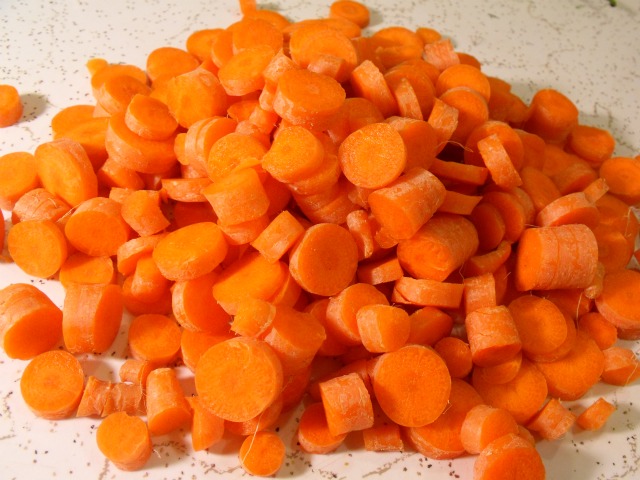 Then I chopped this gargantuan bundle of carrots that I bought today.  I love how cheap carrots are.  Seriously, this entire pile of carrots cost $1.90 and they are sooo bright and crisp and sweet.
After cooking the onions and ginger in the butter over medium heat for about 10 minutes, I added in the carrots and stirred so they were coated in the butter.  Five minutes later, I added three cups of my homemade chicken stock,
and 2 tablespoons of my favorite curry powder (“Muchi” curry powder, in the bulk section at New Seasons).
I let this boil together for 30 minutes, and then pureed it in the blender in batches, leaving a cup or two un-pureed so that there are still some carrot slices in there for texture.  Not a fan of the 100% pureed soups.  I returned all the soup to the pot and added a cup of milk and salt to taste. 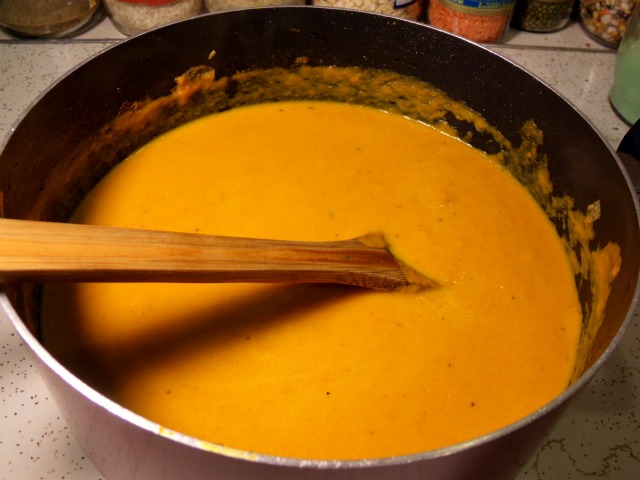 Okay, while this was all happening I’d been cooking some black eyed peas that I started soaking this morning.  Bean salads are one of my favorite make-ahead meals for the workweek.  They just get better the longer they sit in their marinade, they’re super easy to transport, proteinalicious, and can be made with whatever leftover crunchy vegetables you have lying around. 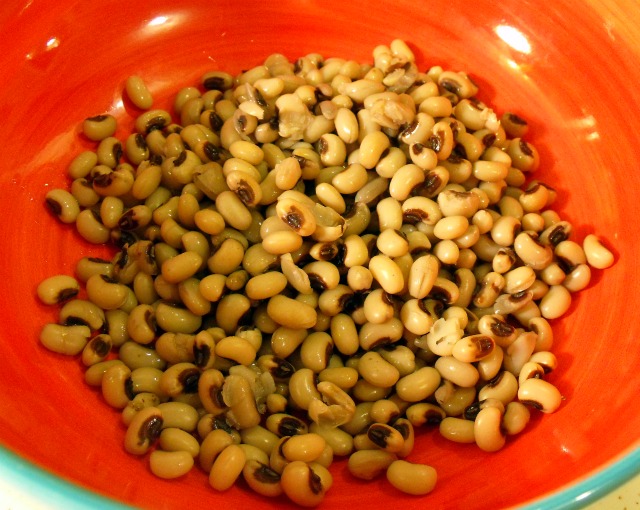 For instance, celery that never got used from last week.  I chopped up the rest of that bunch and added it to the big salad bowl with the cooked beans (I had started with 1/2 cup of dried beans this morning, if you’re concerned about quantity).
I also added half a red onion, 1/3 of a jalapeno pepper, and half a bunch of parsley, all finely chopped.  I also had some leftover mint that was left at my house left weekend when I hosted a ladies’ afternoon clothing swap.  There were Mojitos aplenty, but not enough to eat up two packages of fresh mint, so that got chopped up and added to this salad, too.
Then, a super simple dressing: 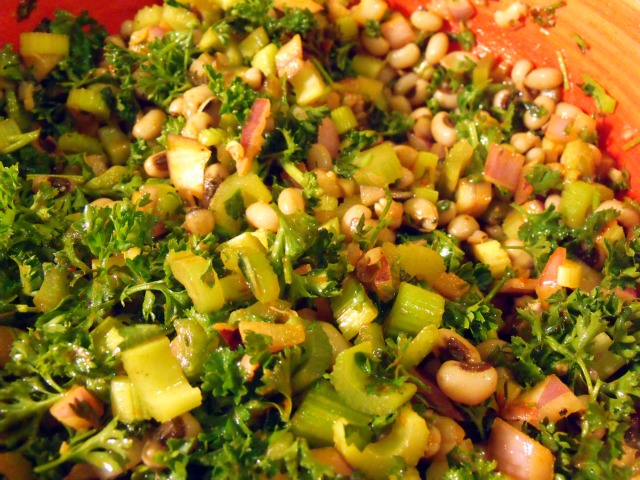 And then, still on the salad kick, I whipped up this salad, courtesy of Smitten Kitchen. 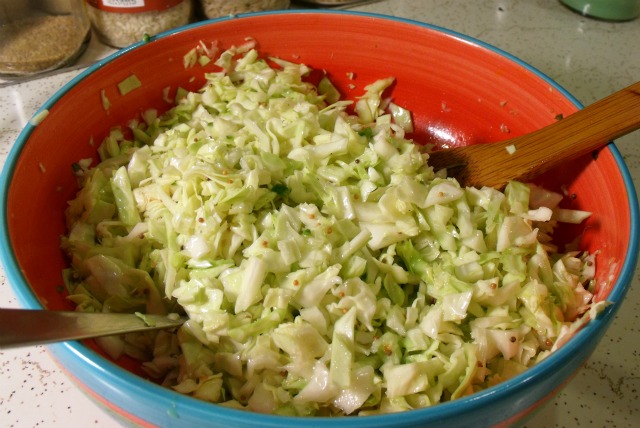 I know this is weird, but cabbage is pretty much my favorite vegetable (nudged out only by kale.  But come on…you can’t compete with kale!), so rather than the 2 cups she recommends I just went ahead and chopped up the whole head.  I have no patience for grating cabbage with a cheese grater, nor do I have a Cuisinart, so I took a chef’s knife to it instead. 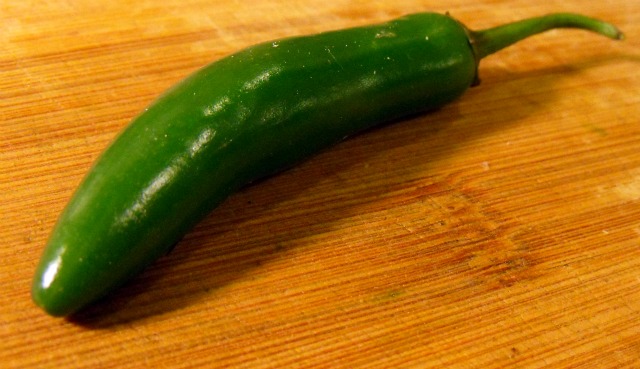 I actually did buy a serrano chile just for this purpose, in a rare fit of recipe adherence, but I have to say, that and the toasted mustard seeds totally give this salad the perfect flavor, and just different enough from my go-to cole slaw recipe to make me feel like maybe a new season is finally in the air.
So in addition to the minced chile, I added to the mix:
6 tablespoons lemon juice
1.5 teaspoons salt
1.5 teaspoons sugar
And then I toasted 1.5 teaspons of whole mustard seeds in some canola oil and, once the seeds started giving their satisfying pop, poured the fragrant topping straight into the bowl.  I can’t wait to see what this tastes like tomorrow after it’s had a night to mellow out in the fridge.
Oh, and since I was roasting that chicken for future lunches, and never know what to do with the wings within my grand scheme of roast-and-freeze-in-meal-size-portions-for-work-night-dinners, they seemed like the perfect way to round out tonight’s dinner. 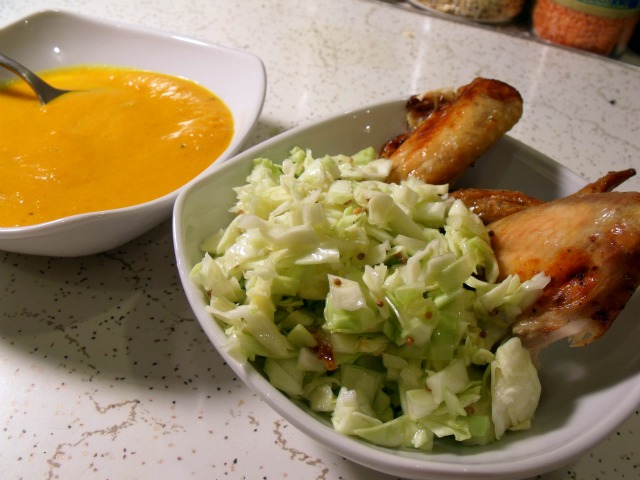 Okay, now I get to reward myself with some pajamas and serious veg-out knitting.