I think it says something when the first thing you do after flying across the country for 11 hours is run out and buy some veggies, doesn’t it?

I just spent 5 days in Orlando and Miami, having a much-needed girls’ vacation weekend and visiting family, and while I got to spend two solid days basking in this 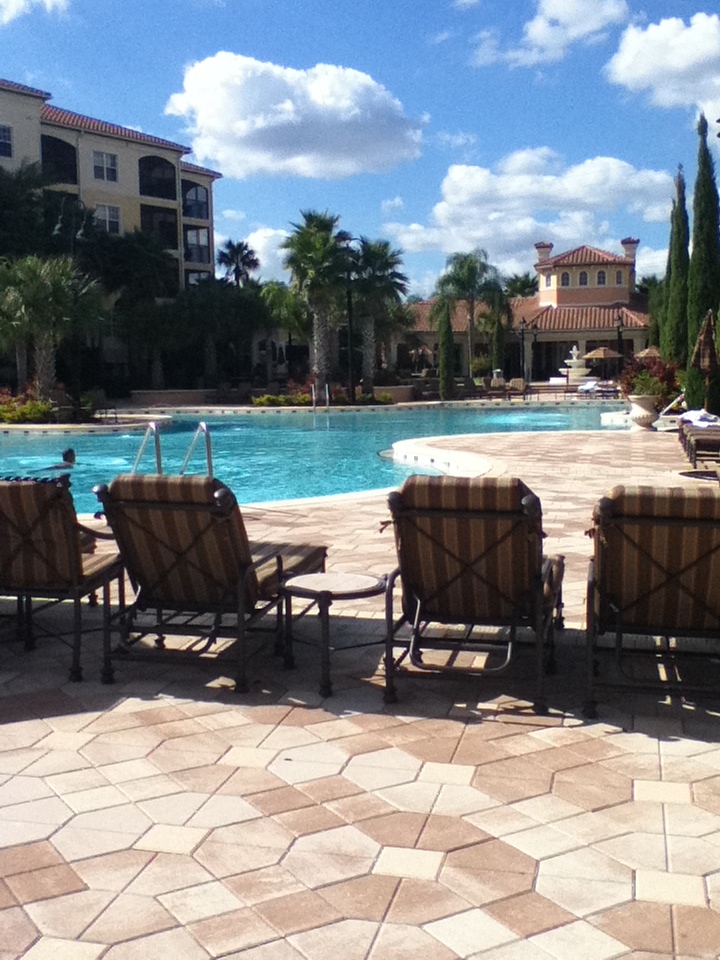 by the end, I was desperately eager for some good Oregon lovin’. 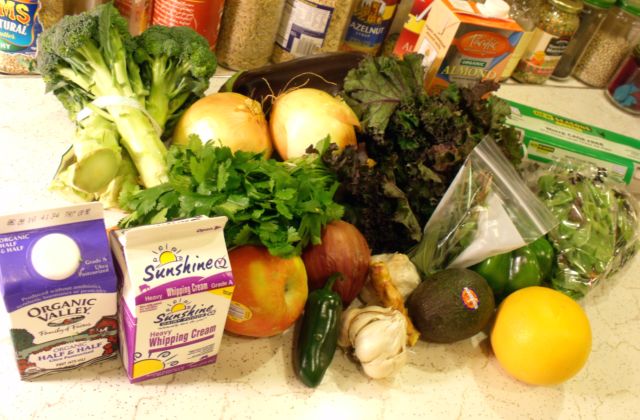 TOTAL: $35.12
REMAINING FOR MONTH: $79.97
I have this really dorky ritual of playing Raina Rose’s “O Oregon” on a straight loop, immediately upon arrival back home, for as long as it takes me to unpack from a trip.
So I guess it should be no surprise that I indulged in the rare treat of returning home from an east coast trip before midnight by cooking up a little something.
I was craving vegetables, in a veritable onslaught, and so without even thinking I threw together a broccoli-edamame-soba noodle salad for my week’s lunches.  But I just showed you that recently, so instead I’ll walk you through what I did after that, still not satisfied that I had filled my quota.
Split pea soup is one of the easiest soups to make, and provides a hearty, filling, meat-free meal, all in a single pot. 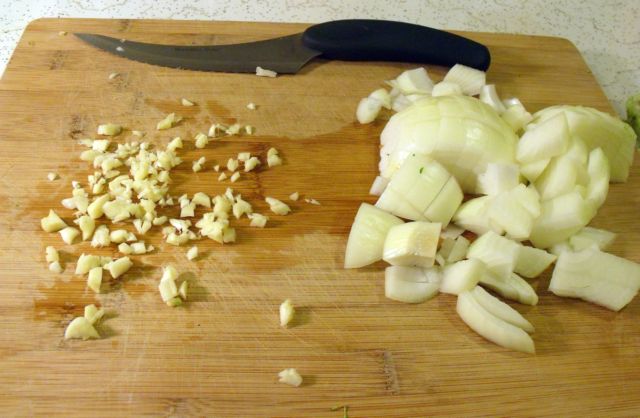 The first step, as with almost any soup, involves chopping up some onions and garlic (I did 1 medium yellow onion and 3 cloves of garlic).
Saute these in some olive oil, in the bottom of your soup pot.  After about five minutes, add some broth.  I keep my homemade chicken broth frozen in leftover cottage cheese containers, so they’re easy to just crack open and dump in, the heat from the saute mixture slowly melting the bullion glacier.  (Substitute veggie broth or bullion here for a veggie-friendly soup, obviously!) 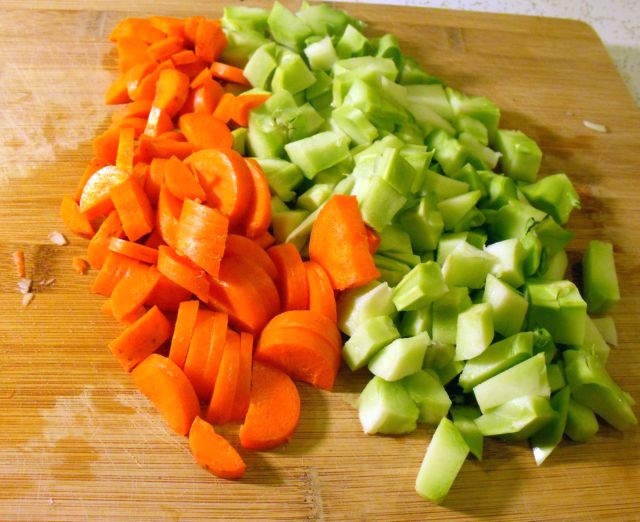 While the broth is melting, chop up your veggies.  I went with a carrot and the stalks from the broccoli I had just used in my salad, but celery would have also been a welcome addition.
Bring the mixture up to a boil, and once the broth has melted or incorporated, add some more water (I fill it near to the top of the pot, so that there is a lot of leeway for it to boil off and reduce, yielding a nice thick well-cooked soup). 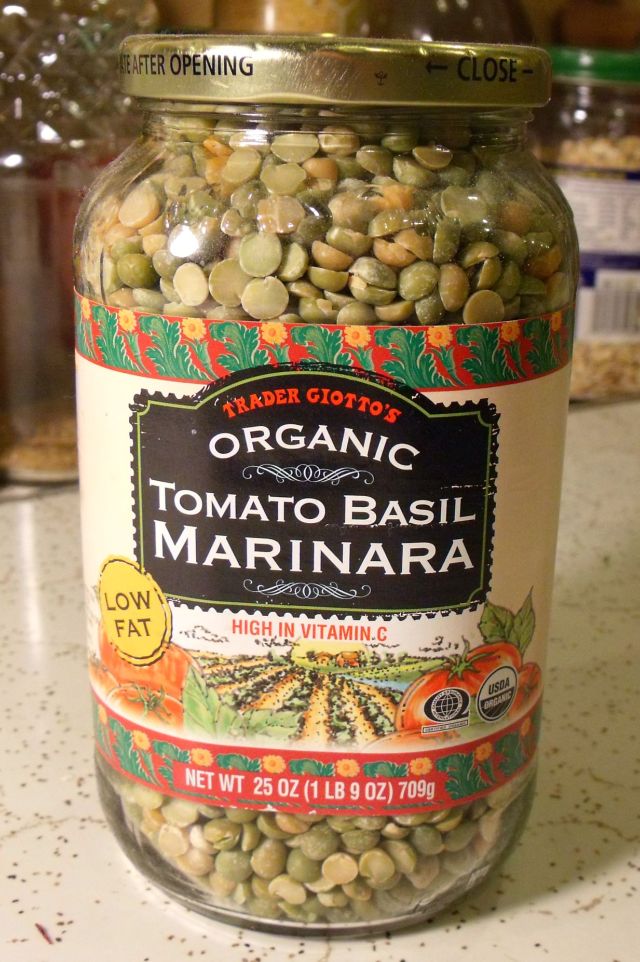 Love these guys.  Buy them in bulk, store them forever, and they will keep you full all day, nearly for free.  Split peas are one of those fantastic beans that don’t require soaking, draining, or blending — much like red dahl.  Just boil them long enough and they will eventually explode, and turn your soup into a wonderfully thick puree — no blender necessary!  I added 1 cup once the soup reached a rolling boil, and kept it boiling on medium high for almost an hour. 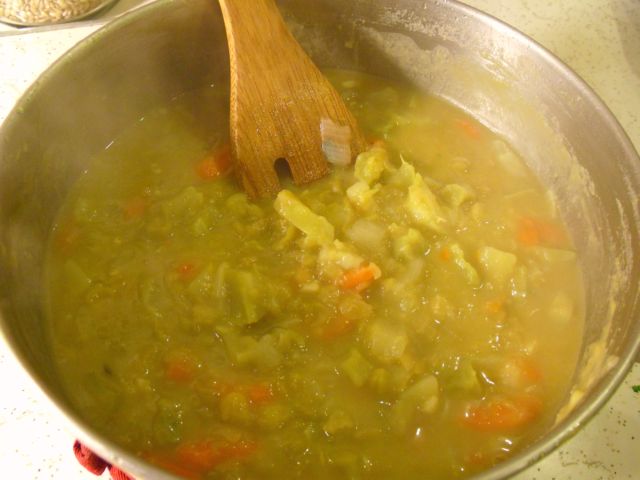 Add salt and pepper to taste, and serve with toast or nice crunchy croutons. 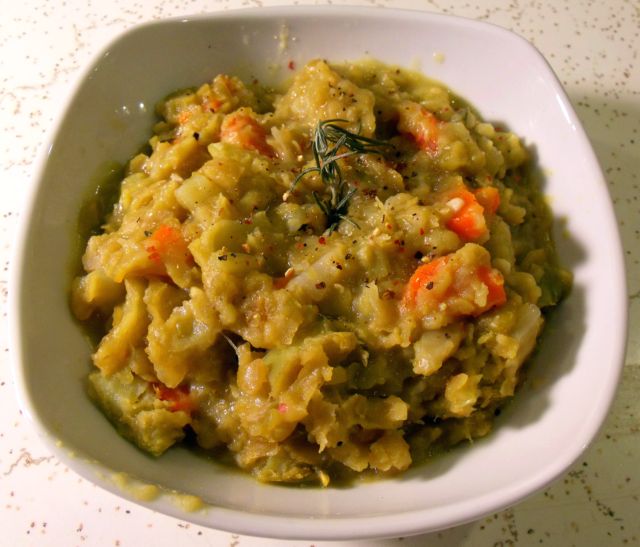