This was an iron chef kind of meal.  Nothing in mind to make for dinner, but a green pepper and gargantuan eggplant that needed to be used up.

Sometimes I like to chop up eggplant into little chunks and use it in a sauce, or puree it and make babaghanoush, but tonight I was in the mood for something meatier, like thick roasted slices of eggplant, mushy but charred at the same time.

I sliced the eggplant, and lined them up on a baking sheet before spreading them with olive oil, and sprinkling them with chopped garlic, salt, and nutritional yeast.  I covered them with another layer of foil and baked at 400 degrees for 30 minutes, and then to crispen the tops, broiled for about two minutes with the foil off. 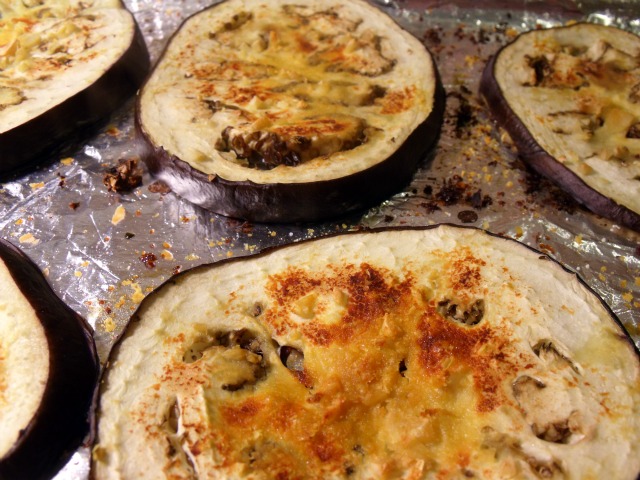 Simply sauteeing the pepper would have made this meal too bland — there needed to be some red in there.  I found the letovers from a large can of juicy diced tomatoes in the freezer, which was precisely what this meal needed.

Prep-wise, all I had to do was chop half a yellow onion and the green pepper into small squares, and saute this in my small soup pot with some olive oil, salt, red pepper flakes, and the fresh herbs that I had on hand — oregano and marjoram (I don’t even chop these, just flake them off the stem straight into the pot).

To that I added the frozen brick of tomatoes and a little water, and covered on high-medium heat until it had all melted into a rich, bubbling sauce.  Then I added some leftover red wine that I had in the fridge to give it a smokier flavor, and let it bubble for awhile with the lid off, to reduce. Last but not least, the quick and easy protein was a package of Trader Joe’s ahi tuna steaks.

Pre-marinated, all you have to do is defrost and sautee, with some lime juice over top to finish. 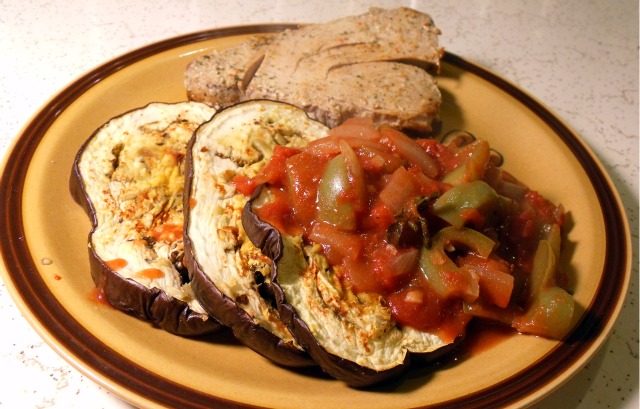