This was a perfect Monday night meal, inspired by this post on the Kitchn.  I love how, despite the four multiple components to this meal (which totally goes against my propensity for one-pot dinners!), everything cooks in the right order and gives you time to prep the next thing while you leave the current one to boil/simmer/saute, and it really does come together perfectly at the end.

The real shining star that made this meal so healthy and delish was the black beans, which I subbed in for the chicken sausage.  I had a long meeting on Monday morning and came home afterwards to finish up my work for the day at home, which meant I was home early enough to get this started — a luxury that most probably don’t have, but that’s the small biz owner tradeoff for late nights, early mornings, and unbridled stress.

Jesse had dutifully cleaned up after a little Super Bowl party that he threw here the day before, so our Dutch oven was sparkling clean and in perfect shape for the job.  I started by sauteeing an entire chopped onion in some leftover bacon fat in the bottom of the Dutch oven, along with 4 cloves of smashed garlic.  After a few minutes I added 2 cups of dried black beans, covered with water, and brought that all to a boil with a bay leaf, a teaspoon of salt, 1/4 teaspoon of chili powder, and some chopped up leftover charred poblano peppers that I had in the fridge from last week when I made us cheesy shrimp-stuffed peppers for dinner.  After bringing this all to a boil, I then turned everything off and let it all sit on the stove for the rest of the afternoon, not touching it again until later that night when I came home from a long run, when I brought it back to a boil and then let it simmer for about 40 minutes, with the lid slightly ajar.  (The sitting all afternoon effectively was me soaking the beans, just in a more complicated water.) 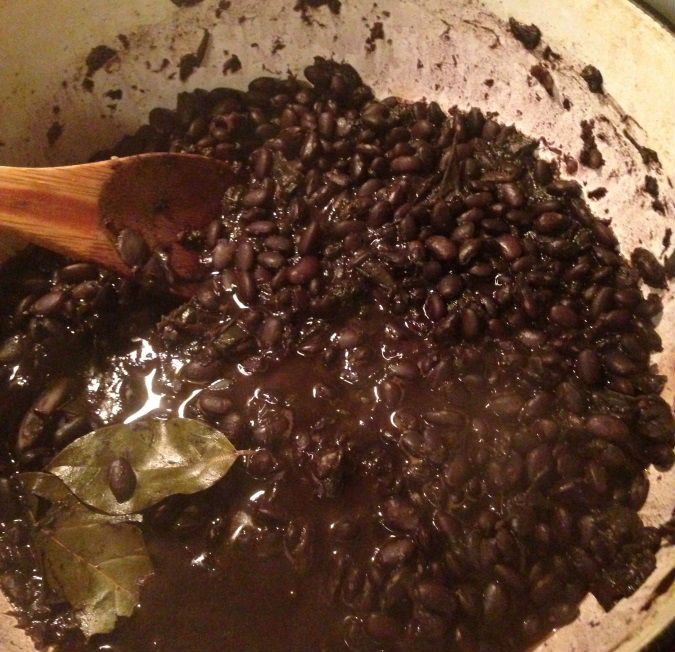 While the beans were simmering, I started the polenta, bringing 3 cups of water and 1 cup of milk to a boil together in a pot on the stove.  Once it started boiling, I whisked in 1 cup of polenta and 1 teaspoon of salt, covered, and simmered — whisking every few minutes to prevent clumping.  Once it had thickened, I added a big handful of shredded cheddar to the pot and stirred it in until it had incorporated.  I usually save polenta for nights like these, when Jesse does his own thing for dinner and I can experiment with foods I don’t think he’ll particularly like.  But after making polenta like this, I kind of feel like I need to force him to give it another go.  When you make polenta with this much cheese and milk, I kind of feel like anyone who loves macaroni and cheese, has to love this, too. 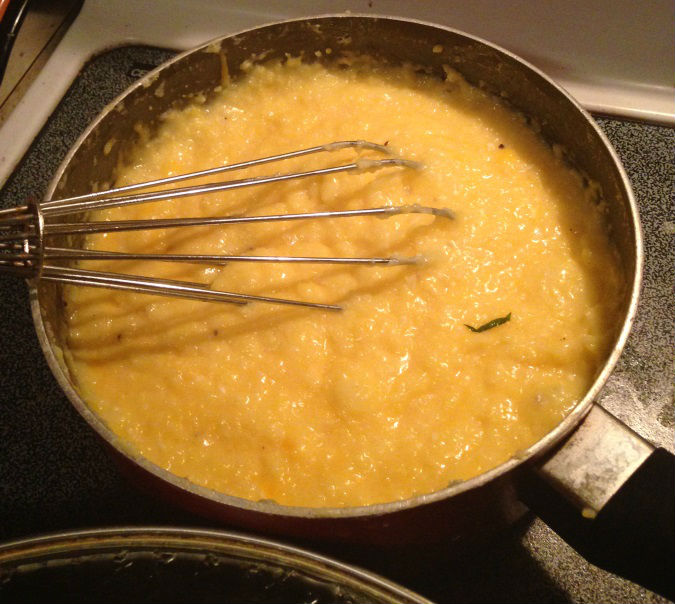 While that polenta was in its last stages of thickening, I got started on the spinach — but we also had a yam that’s been sitting around for awhile, so I chopped half of that up into little cubes and pan fried them first.  Once the yam was pretty well cooked, I added a chopped shallot, 3 cloves of pressed garlic, and a giant bunch of fresh spinach, chopped, to the skillet.  Once the spinach was perfectly wilted, I removed it from the heat. 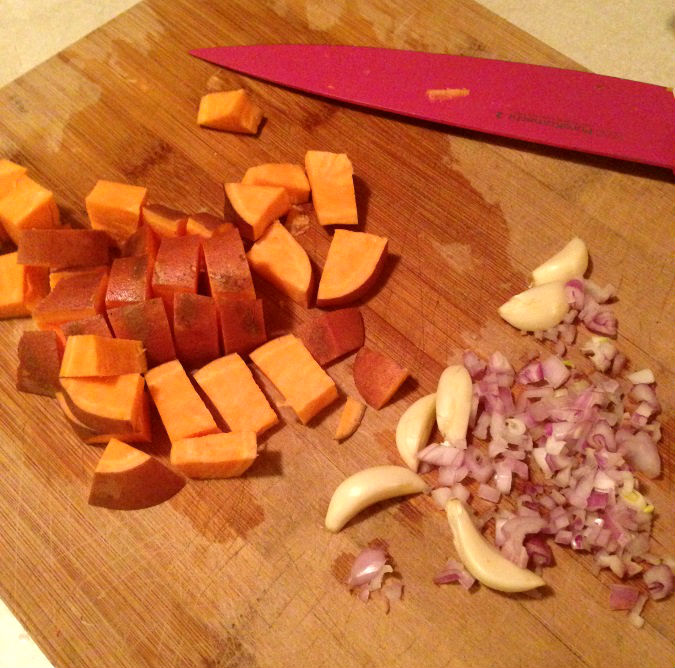 Right about when I threw in the spinach, shallot and garlic, I also brought a small little saucepan of water toa boil on the adjacent burner with a spoonful of vinegar, to poach this egg.  Once the water was at a low simmering boil, I cracked the egg into the water, careful not to break the yolk, and set my timer for 4 minutes.  I think 4.5 minutes is perfect for a poached egg, so once I hear the timer go off, this gives me just enough time to find a spoon to fish it out with, assemble my bowl with all the components (polenta, beans, and spinach), and head back to the stove to place the egg on top as the crowning jewel. 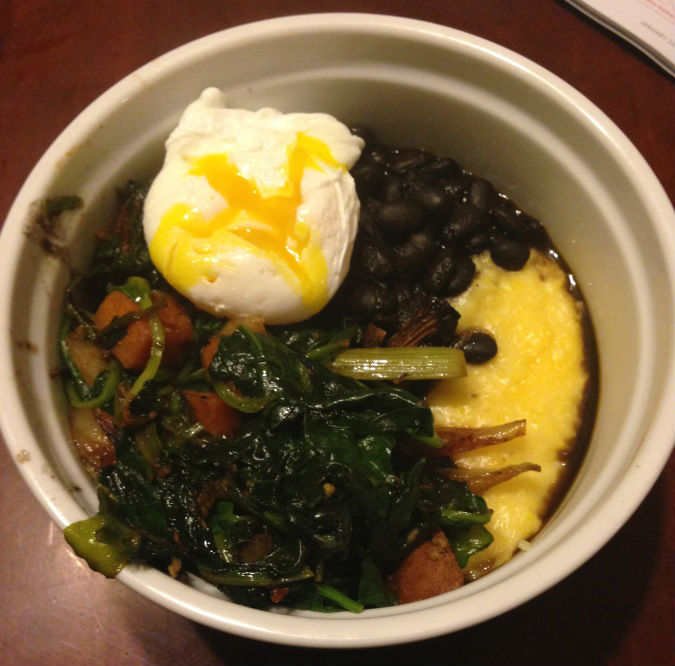 One thought on “Cheesy Polenta, Black Beans, Garlic Spinach, and a Poached Egg”