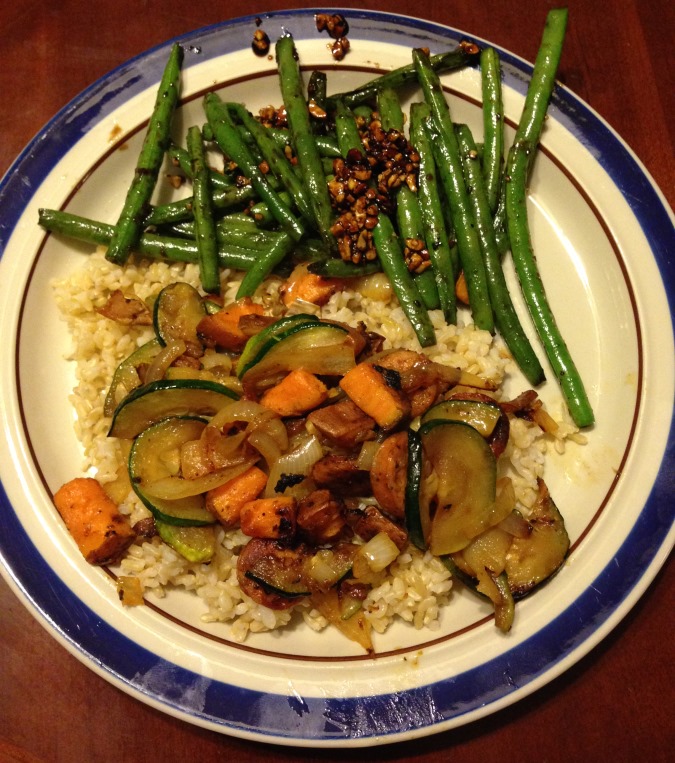 Well hello there!  Yes, it’s been awhile, I know.  I sort of slipped into a funk there about what this blog is about, and I’ll tell you why: Living by myself, keeping up with what I was buying, cooking, and eating was super simple.  I did all my own grocery shopping, cooked nearly every meal for myself, and always knew what was in my cupboards, freezer, and fridge.  And, sticking to my $6 a day budget really was a challenge.  There were some months there where I had $6 left in the last week of the month and had to invest it in greens, making brown-rice-black-bean-collard bowls for the rest of the month.  (Which, honestly, is not a bad way to go.  It’s actually one of my favorite weeknight meals!  Especially if you have some good hot sauce on hand.)

But, moving in with Jesse has been a whole different ballgame.  I still do almost all of the grocery shopping, kitchen organizing, and cooking, which I certainly can’t complain about.  If that’s the way our division of labor shakes out and I get to sit back and knit while he fixes an emergency leak in the upstairs shower, or cleans the gutters on Saturday morning, I’m a lucky girl.  But, it does complicate things for the purpose of this blog.  For instance:

So, while I certainly haven’t stopped cooking, shopping frugally, or getting creative with my leftovers, I did stop blogging about it for about eight months!  But, recent requests from certain friends and customers have convinced me to get back into it, realizing that maybe this blog will just have to revamp its purpose.

So, I probably won’t be taking snapshots of all my receipts, keeping a running total, or showing you the breakdown of what each ingredient costs.  But, I will keep taking pictures of meals that I’m proud of, and telling you how I made them!  And you’ll just have to trust that I’m still scouting out the best deals at the grocery store, buying for the future, and getting creative with what’s already taking up space in our freezer/pantry/fridge/cupboards.

This one was a wonderfully collaborative meal, totally by surprise, and was actually precipitated by an argument about Point #3 above.  Every once in awhile, when it comes time to reconcile the monthly bills (which includes all the groceries we put on our shared credit card), Jesse gets all grumpy-pants about it, huffing that he pays for half the groceries, even though he barely eats any of them.  Which, I believe, is really not my problem.  Whether or not you choose to partake, you have a healthy, home-cooked meal waiting for you every night, plenty of leftovers for us both to take to work, and I even make most of our dinners with you in mind (i.e. usually featuring meat and/or cheese, Wisco-style!)

Being able to to share fridge space, grocery costs, cooking, and mealtimes is supremely important to me — and a requirement for me even with a regular old roommate, let alone a life partner.  Even in college, I entered every roommate situation making it clear that I did not want to have the kind of fridge where we each have our own shelf, shop independently, and label our own milk with our names in Sharpie.  Being able to share in each other’s nourishment is one of the most loving things we can do together, and I have been adamant since day one that if we are going to split the mortgage, water bills, and 50-lb. bags of food for our pup, then we should be splitting groceries too, because they are (and should be) part of our life together.

For me, part of sharing groceries also welcomes open conversations about what we’re eating, what we’re spending, what we want to cook together — whether it’s a savory midweek crockpot meal or a gigantic smoked brisket for a party.  It means that if our grocery bill is too high one month, let’s talk about it and figure out why and decide ways together to pare it down.  It means that even though you may not ever eat any of the cottage cheese that I make my morning Israeli salads with, you also get that entire package of Oreos to yourself, or if you want to eat a frozen pizza for dinner one night, go for it!  I’ll split that with you too even if I’m not having any.

I came home from work that day armed with all these arguments in mind, ready to make my case, only to find Jesse had already worked all this out in his own head over the course of the day, and was agreeing with all my points before they even finished coming out of my mouth — the best kind of frustrating.

And, on that note, I dug some random veggies out of the drawer that I thought would complement each other — zucchini, onion, and sweet potato — and a package of chicken sausage out of the freezer where I like to keep random protein on hand just for occasions like this, pointed to the pile and said, “Okay, why don’t you make a hash out of that.”

This is one thing I love about cooking with Jesse: he is refreshingly compliant and capable.  Sometimes I’ll have a vision for dinner, and instead of trying to handle all the components I’ll pull up a recipe for one of my ideas, set up his tablet on the kitchen counter, and tell him to “make that.”  He’s really good at following directions.  The other side of this is that I can trust him to chop up whatever I put before him, add it to a skillet, and season it well by improvisation.  I honestly can’t even tell you what he put in this hash, but I do know he cooked the diced sweet potatoes first since he knew they’d take the longest, then added the onion and sausage, and cooked the sliced zucchini separately so it wouldn’t get too mushy.  Swoon.

In the meantime, I trimmed the ends off of a big bag of green beans I bought last week, heated up some peanut oil in the smaller skillet over medium heat, and tossed them in.  After they’d sauteed for about two minutes, I added some store-bought stir fry sauce — nothing fancy, just some Vietnamese-style bottle of something-or-other that’s been in our fridge for awhile.  While I probably could have whipped up a homemade version of this blend, I get antsy when there isn’t regular condiment turnover, and I’m sure I bought this at Grocery Outlet some time back because it was on crazy-super-sale, so I went for it.  This added some liquid to the skillet as well, which sped along the cooking process by adding the element of steam.  I ground up some peanuts (yes!  I have  nut grinder!  It’s one of my favorite appliances, probably because I love cooking Asian food and about 60% of my meals involve chopped peanuts), and added them to the pan, causing them to get nice and toasty and also caramelize in the sauce.

I almost always have a batch of cooked brown rice already on hand in the fridge, so we just nuked some of that, spooned Jesse’s hash over top, and ate the green beans on the side.