Whew!  The busiest two weeks of my year are officially over.  With the Urban Craft Uprising Winter Show officially under my belt, my regular dynamic well-rounded life can resume!  Jesse and I pulled into the driveway of our new, much-missed home late Sunday night, driving straight back to town after tearing down from the show.  We both passed out on the couch without making it through even a single episode of Parks & Rec.

My “weekend” Monday/Tuesday after UCU is all about unpacking, deconstructing, and reorganizing…basically getting the shop back to looking like nothing ever happened.  Ha!

So Monday morning I slept in for the first time in weeks, and didn’t leave the house at all, except to go for a long run just before it got dark out.  I had the house to myself all day, and got to do exactly what I was craving: catching upon emails, drinking coffee, unpacking my suitcase, stowing show supplies until the next one (next July!), counting my money, running loads of dishes and laundry, and wearing yoga pants all day long.

I knew I wasn’t even going to pretend to make it to the grocery too, and we had fled the house last Thursday morning with an unsettling amount of produce still left in the fridge, which by Monday night, was looking woefully unperky.  Time for some minestrone soup.  With the house now clean and my slate ready to start December fresh, I wanted those veggie drawers empty, ready to be restocked with new and exciting ingredients for some hunker-down winter meals.  We’ve been eating catered sandwiches and takeout all weekend, and I’m stoked to turn on the stove again.

Here’s what I had at my disposal. 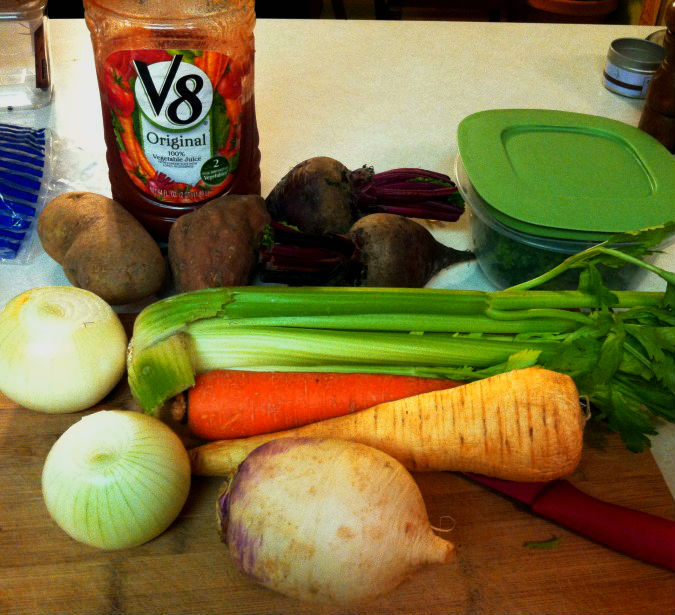 That’s a lot of root veggies.  Lucky for me, I keep New Seasons’ dried 12-bean mix in my pantry.  So while I poured my second cup of coffee in the morning, I also set a cup of these in a pot of water to soak for the rest of the day.  And when it came time to make dinner tonight, I cooked those for about 30 minutes until all the beans were soft enough — even those gigantic ones.

What’s the basis of all veggie soups?  A mirepoix, of course. 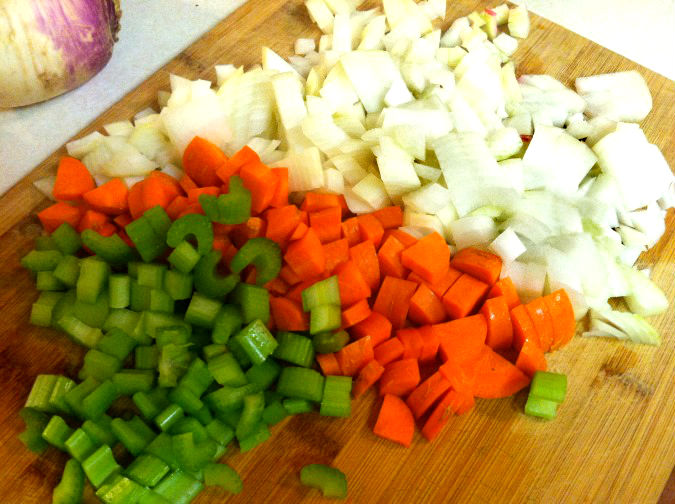 I started sauteeing this mix directly in the soup pot, in some olive oil, along with a few bay leaves.  Meanwhile, I skinned and diced those other root veggies (rutabega and parsnip). 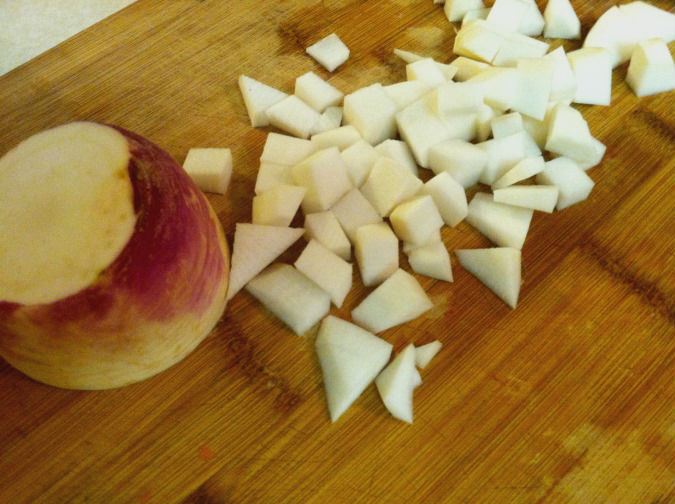 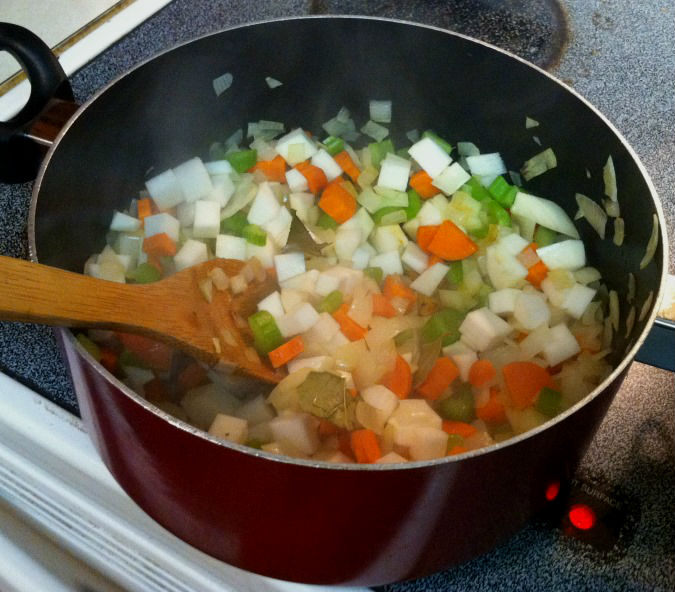 Into the pot those went, as I filled it up just a couple inches below the brim with some water and bullion to make a nice broth — cranked the heat until it boiled, then let this all simmer on medium-high until the veggies were just done.  There was also a package of sliced mushrooms that I threw in there, which didn’t make it into the photo shoot.

Then, I added about 2 cups of V8 veggie juice, to give the broth a nice rich tomato flavor, added some salt, the beans which were now cooked and drained, and half a teaspoon of cayenne pepper.  A winter soup needs some kick! 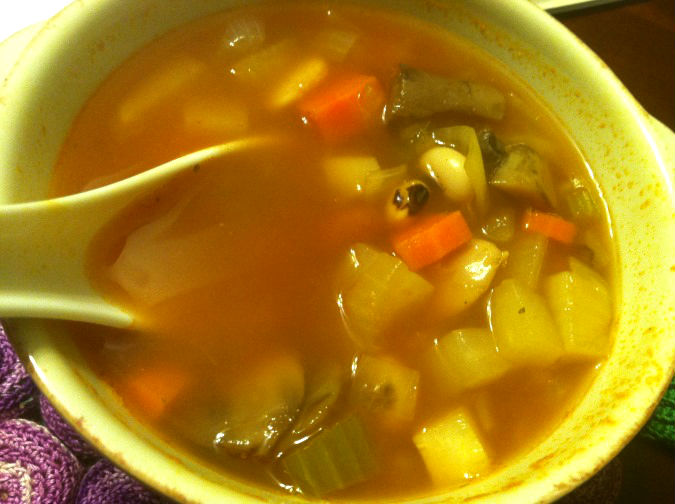 Oh, and the rest of those root veggies that didn’t make it into the soup for fear of overwhelming it, I chopped up and roasted in the oven with a simple mix of olive oil, nutritional yeast, Lawry’s salt, pepper, and oregano, just to have a yummy, crispy side dish to have in the fridge for the week.  Here they are pre-roasting. 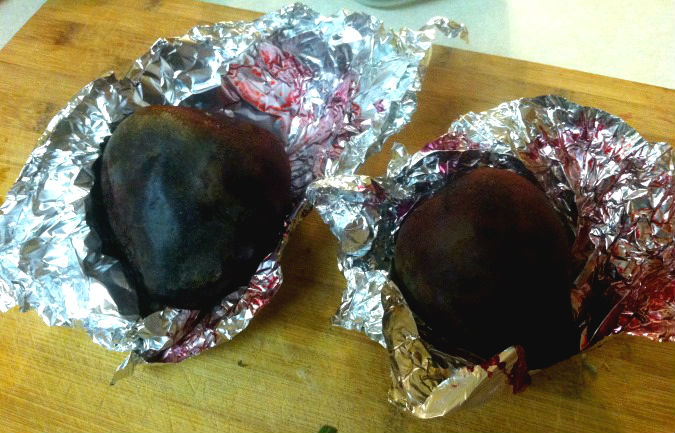 What about the beets?  I’m a pretty big beet separatist because…well…you know what happens when beets touch anything.  And in my world, beets don’t go in soup, not even borscht.  I’m one of the lucky ones who loves beets for what they are, so I just wrapped those up in foil, roasted them in the oven at 400 degrees for an hour.

Then I slid off the skin and sliced them up, stuck a wedge of blue-brie cheese in between the hot slices so it got all melty, and drizzled some balsamic over it all.

Now this is just sheer luck of the draw, but I happened to snag some leftover swag from one of our awesome vendors, Honest Biscuits, as we were closing down the Ex Hall at the end of the show. 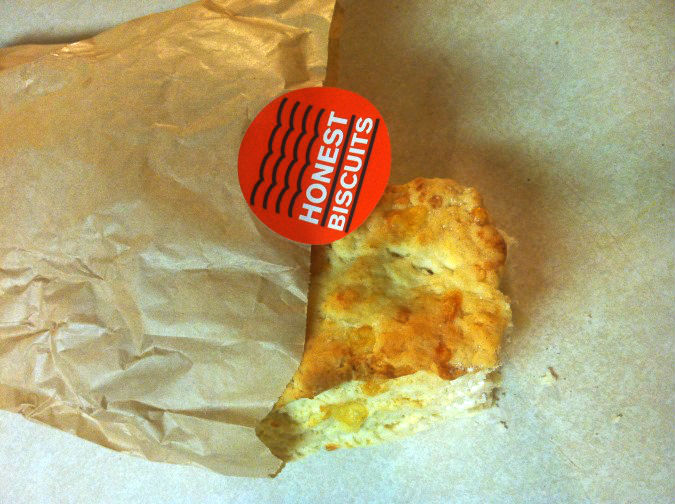 Heated up in the toaster, this made the most delicious accompaniment to a winter minestrone soup anyone could dream up. 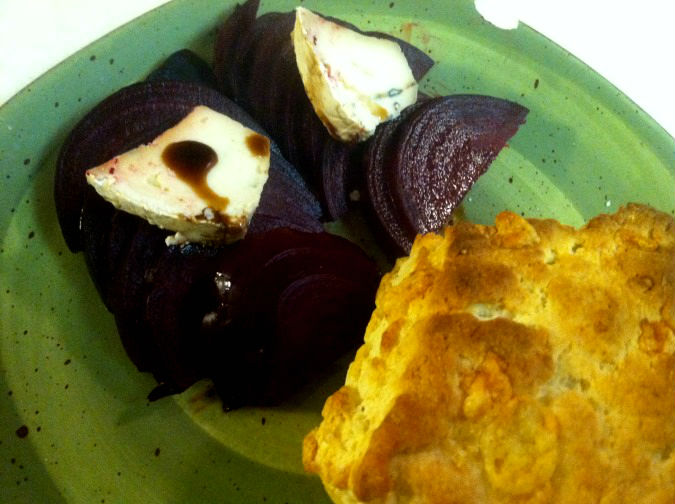 Jesse was out for the night, so I got to enjoy my dinner in one of my favorite ways: while reading through a new cookbook and bookmarking pages. 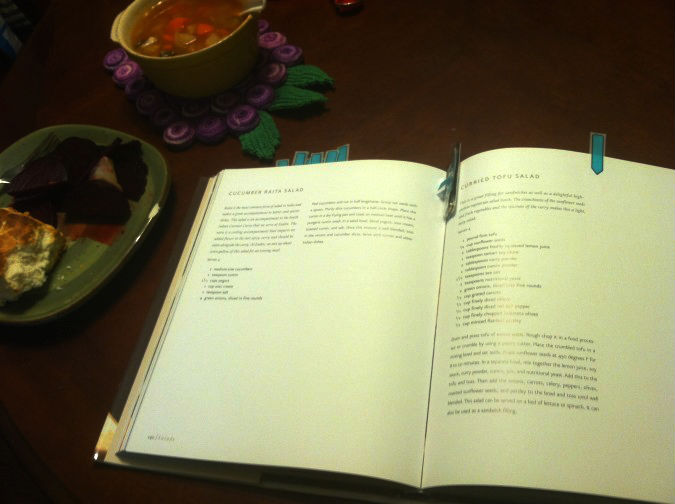 None!  Iron Chef-ing it with what’s left in the fridge, baby!  Plus, when we’re up in Seattle on official business, UCU treats us to all our meals, so we were indulging in the rare dining-out vacation.