Sometimes it’s those nights where I’m cooking by myself, thinking I’m going to just whip up something quick and easy, when nobody else is around to witness it, that I wind up eating masterpieces for dinner.  I guess that’s how this blog originally started, but now that I live with Jesse those nights feel more rare.  Not that he won’t eat anything that’s put in front of him, and probably seconds and thirds as well, but when we’re cooking together, or even just when I’m cooking for both of us, I find myself sticking to the tried and true, even using recipes more.

So Monday night, while Jesse was out bowling with the boys, I found myself out running errands until just before dinner, and en route home totally ravenous.  I so rarely do this — stop at the grocery for like a single item — but I was craving some sort of fish.  The Johnson Creek Freddy’s actually has a pretty decent seafood department, so I pulled over totally impulsively and bought a piece of salmon.  This was no big splurge — it was less than $7 for the whole piece, which I only used half of and froze the rest (and wound up with leftovers for lunch, still!), but it still felt nice to treat myself to exactly what I wanted, and make a delicious meal, just for myself.  Like I always used to do! 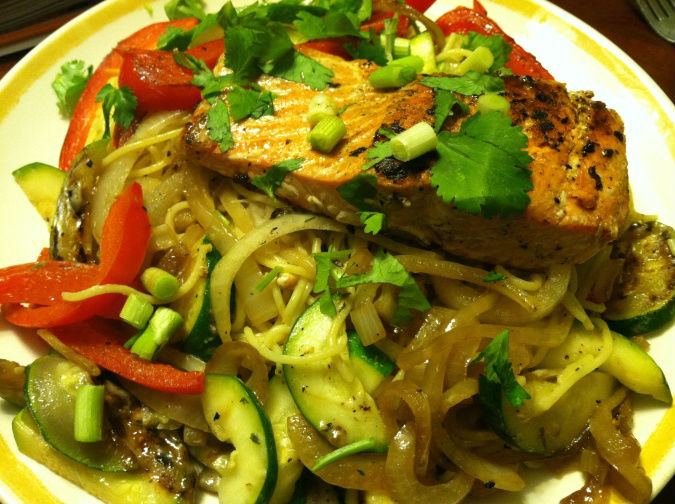 This was partially inspired by a super simple Ina Garten recipe (I’m currently reading through the Barefoot Contessa Family Style cookbook), urging me to cook my zucchini slices in small batches so they brown and crisp instead of steam and get mushy, and then cover them in parmesan, for good measure.  She’s right, I realized, this is the reason I always forego the zucchini, because it always gets mushy and overcooked, no matter what I do.  And the pasta?  Angelhair pasta was undoubtedly the carb-y texture that I was craving that night, and we just happened to have a partial package of it in the pantry.  Bingo.

First I sauteed up half an onion in some super delicious olive oil. 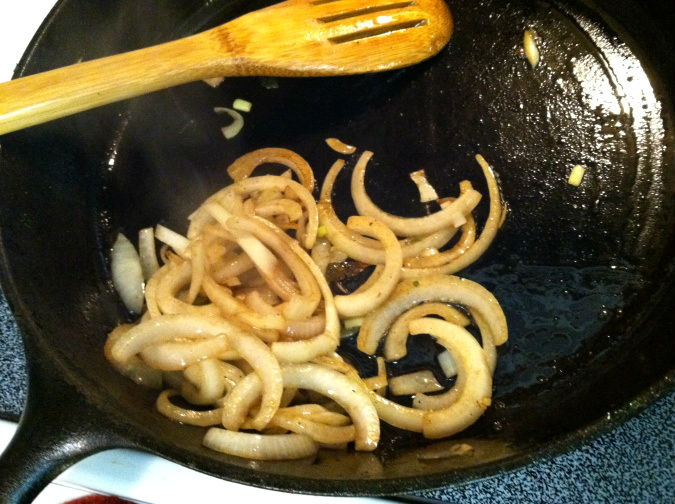 I’d made some homemade feta a few weeks back, which you can store at room temperature, as long as it’s submerged in oil.  I had added some rosemary in there for good luck, and now that all the cheese is gone, I’m left with this wonderfully dank olive oil to cook with! 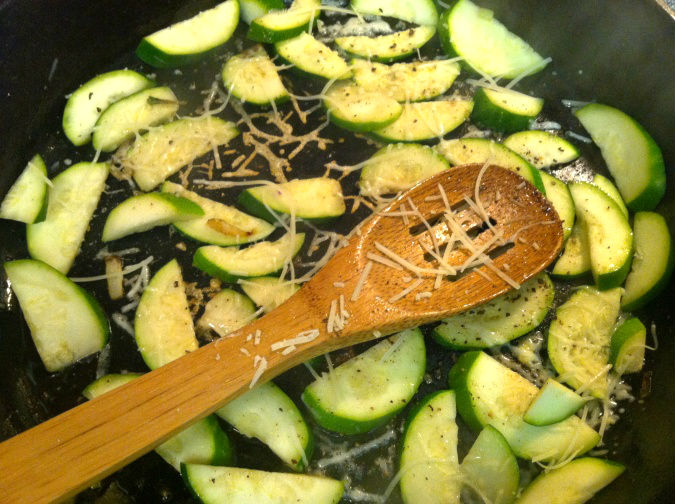 Like I said, I cut the salmon steak in half, and stuck the rest in the freezer.  This part, I stuck straight into the skillet, (which I had now cleared of the zucchini, keeping them warm in a covered bowl), skin side down.  After about five minutes I flipped it, and now the skin peels easily off, as if it were never even attached. 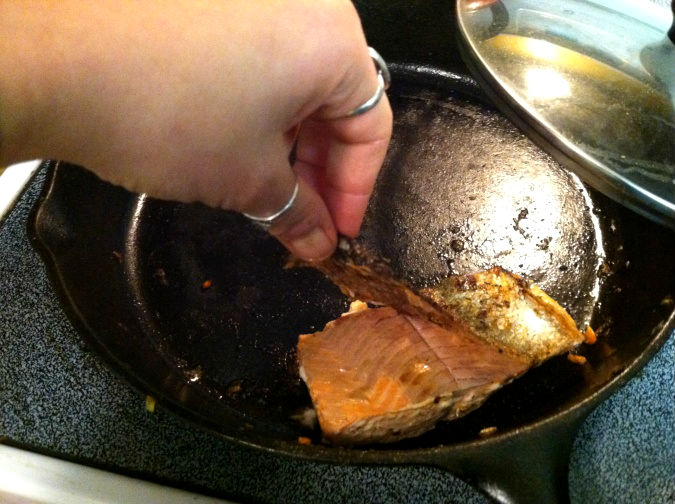 I covered it again and let it blacken with all the residual salt, pepper, and cheese flakes that were in there from the zucchini, and then added a sliced red pepper in there along with it. 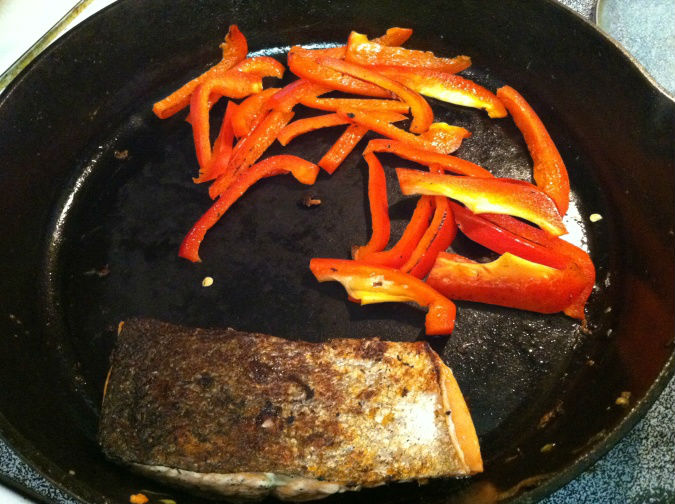 I make popcorn, like, almost every night.  Pretty much, yeah.  Someday I’ll show you how the pros do it, but for now all you need to know is that I make a little mixture to sprinkle on, that involves nutritional yeast (fine grain), Lawry’s salt, pepper, and oregano.  After each batch of popcorn, there is a thick layer of detritus at the bottom of the bowl from where these seasonings missed the kernels and sifted through.  I save this in a little bowl and sprinkle it on just about everything, because it is unbeatably delicious.  So if you ever hear me referring to just general “herbs,” this is probably what I’m talking about. 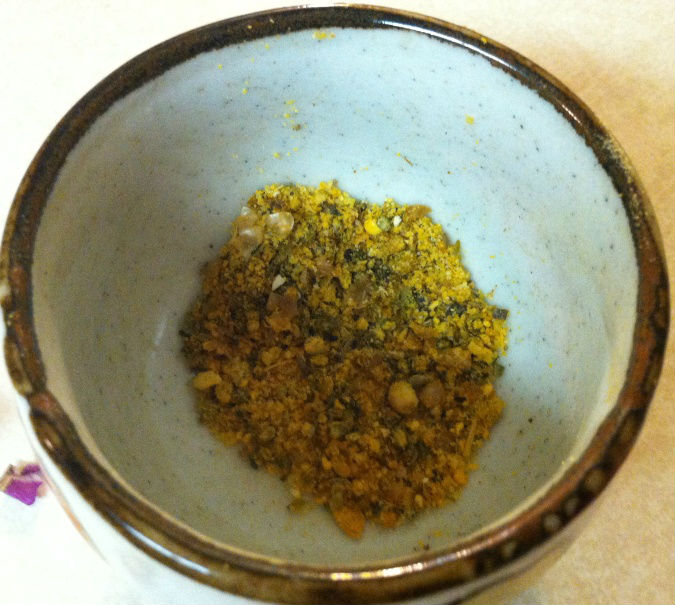 Watch out for the kernels.

Meanwhile, I’m boiling some water and cooking some angel hair pasta — just enough for a single serving.  Jesse and I had big plans to cook risotto on Tuesday night, so I’m not looking for leftovers here.

Once the pasta was done I strained it, threw it right back into the pot, and added some butter, a few shakes of nutritional yeast, a splash of cream, a few squirts of lemon juice, and some cracked pepper. 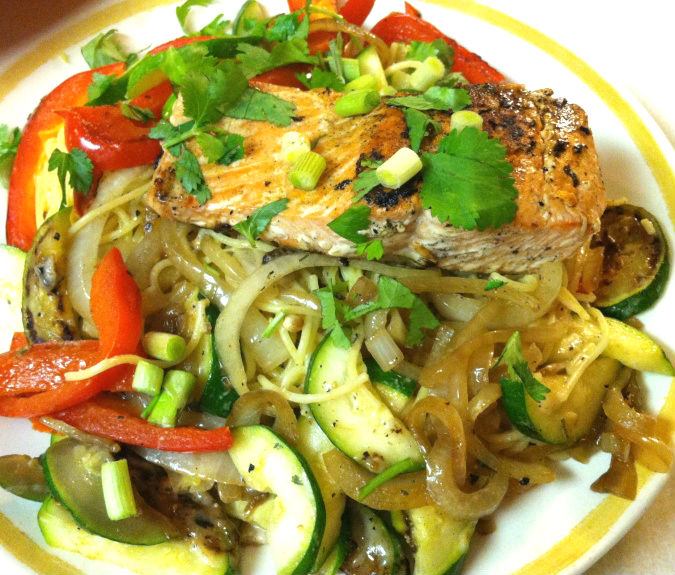 I mixed that all up and poured it onto a big plate, serving as the “bed,” and then on top of this added the zucchini, peppers, and salmon.  They had all been waiting for this moment. 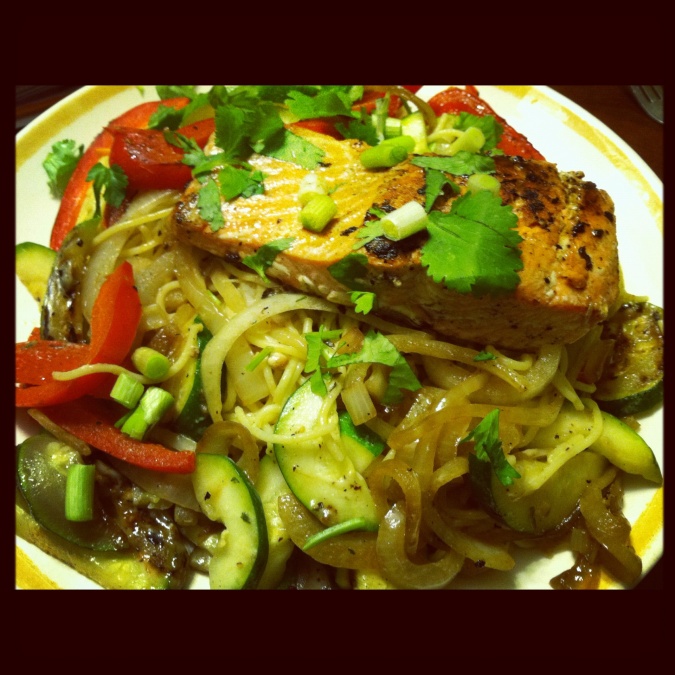