All right, I have a new favorite way to use up leftover smoked turkey…and leftover pretty much anything now, I imagine.  Jesse had smoked a big breast of turkey for my family Thanksgiving last weekend, and for days we danced around its leftovers, reheating only the side dishes, until we finally found an evening where we were both free, and in a delicious feat of teamwork, came up with this. 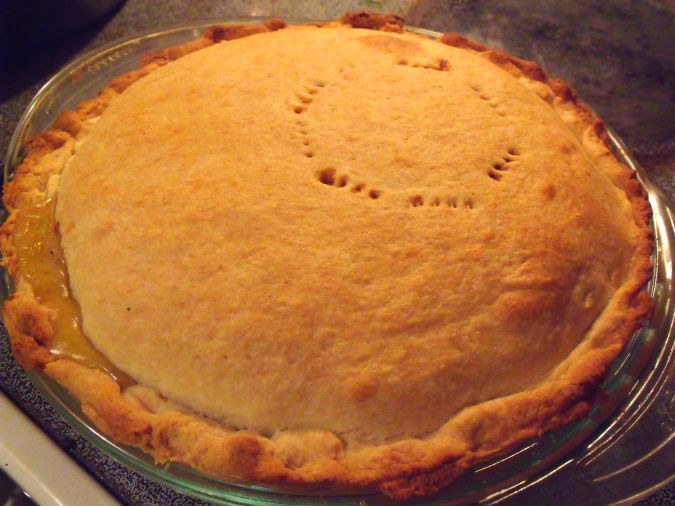 It was so incredible that I actually got angry when I discovered that he ate the last slice in the middle of the night (after real Thanksgiving, no less!  This man’s appetite is insane!), the one I was planning to bring for lunch on Black Friday…a very long day for me.  But it was so awesomely easy to make, he promised me we’d make more.

I used a lazy version of this pie crust recipe, and I say lazy because I don’t spend too much energy trying to keep the butter in pea-size chunks, I don’t refrigerate it for as long as I’m supposed to, and I don’t even own Saran Wrap.  But it always works out anyway, which deters me from ever trying any harder than that.  Basically, I took her ingredient ratios, mixed everything together, tried not to overwork it, and stuck it in the fridge for about half an hour while Jesse finished making the filling.

It still rolled out easily, molded to the pie pan perfectly, sealed tight around the filling and never broke, and sliced through easily when it was time to serve.  And it was even still pretty flaky!  Maybe not croissant-flaky, but flaky enough for me. 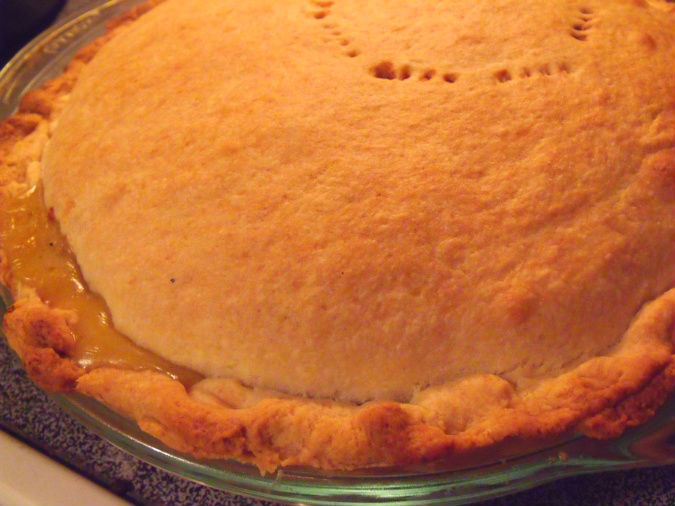 So then for the filling, we referenced this recipe from another one of my fave food blogs, but of course we
were starting with some pretty incredible home-smoked turkey which I think helped the cause.  It starts with a mirepoix — sauteeing diced carrots, onions, and celery in a healthy dose of butter, then after a few minutes, adding the turkey, which we had also chopped up pretty fine.

Here, instead of making a roux the traditional way, by melting butter, stirring in flour, and then thinning it with milk, you just sprinkle the flour right over this whole deal, which feels relievingly simple, and still left no clumps.  We mixed up some veggie bullion in a glass cup of hot water to make a quick-and-easy broth (I haven’t roasted a chicken in weeks so I didn’t have any homemade on hand), added that with a little wine, and then the 3/4 cup of half and half.  (Both being coffee drinkers, we always have a gigantic carton of this in the fridge, so I tend to use it in the place of whipping cream in most recipes.  It’s rich enough, believe me.)

We added some frozen peas for that traditional pot pie look, and fresh sage that we had in the fridge, let it all come to a boil, and sure enough, it thickened up just like it was supposed to.  And tasted so amazing, we could have hovered right there over the stove, eating it all with a wooden spoon. 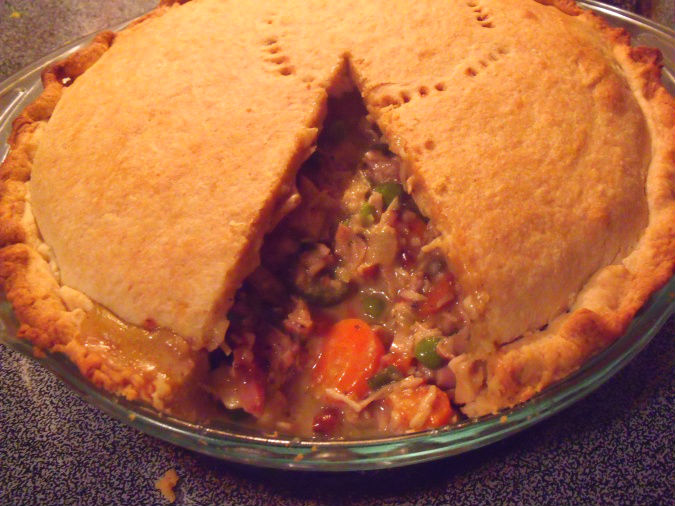 But we restrained ourselves, and instead poured it into the pie pan, where I had already rolled out half the crust and pressed it into the bottom.  I rolled out the second half, laid it on top of the filling, and sealed all around the edges, making cute little pie ruffles (my glass pie pan has these imprints built in, so all you gotta do is press).  This baked for almost an hour at 400 degrees before the crust was brown enough for Jesse’s discerning eye, and barely lasted 24 hours before it was gone entirely. 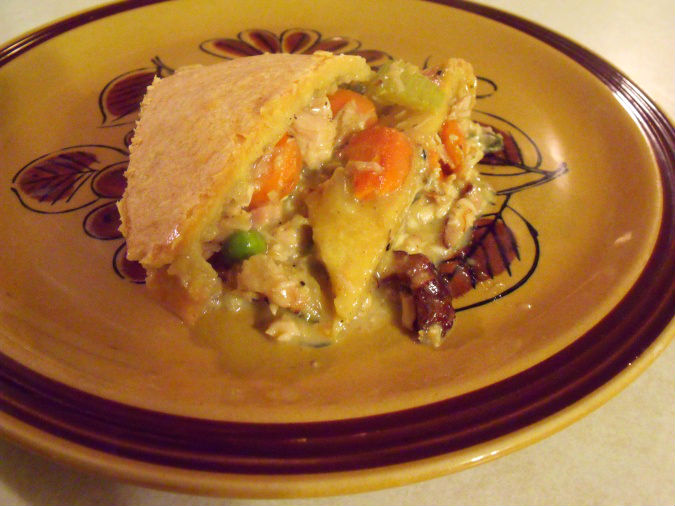