I love when I can make a delicious dinner entirely out of what’s already in my kitchen, and all that is required is stopping on my bike ride home to pick up some fish and a head of collard greens. 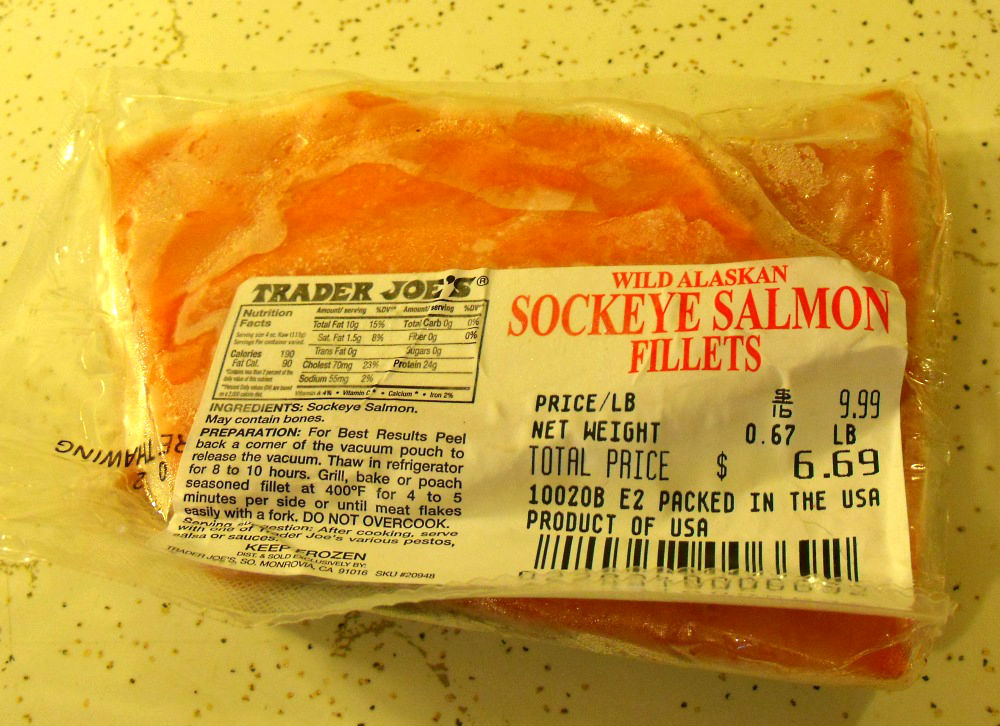 I can’t even believe how busy this week is, and relish in the fact that with all that’s going on, I still take the time to cook myself a delicious meal on a Wednesday night.  Really, at a time like this, I should be eating take-out or leftover pizza from UCU last weekend.  I mean, seriously.  After driving back down to Portland on Sunday night, I spent all day Monday unpacking from the show and reorganizing the shop, prepping for the coming work week, especially because my wonderful employee is on vacation and I’m flying solo for the next 2 weeks.  Awesome timing.

Then, I’m working all week, getting the keys to the house, spending the evening with my best friend who just got back from 3 weeks in Hawaii, hosting old high school friends from out of town Saturday night, and then quickly washing the sheets so I can host my business partner for a 24 hour debrief of last weekend’s show.  And we’ll treat ourselves to a fancy dinner in there somewhere.

Oh, and then Monday I had to buy a fridge.  And a bed.

And then Tuesday I move.  Into my new house.

And then Wednesday I will go to work and spend the whole rest of the evening prepping 4 days worth of food to bring with us to String Cheese at Horning’s, the festival we’ll be at the whole following weekend.

And yet, last night I came home and still felt compelled to cook this. 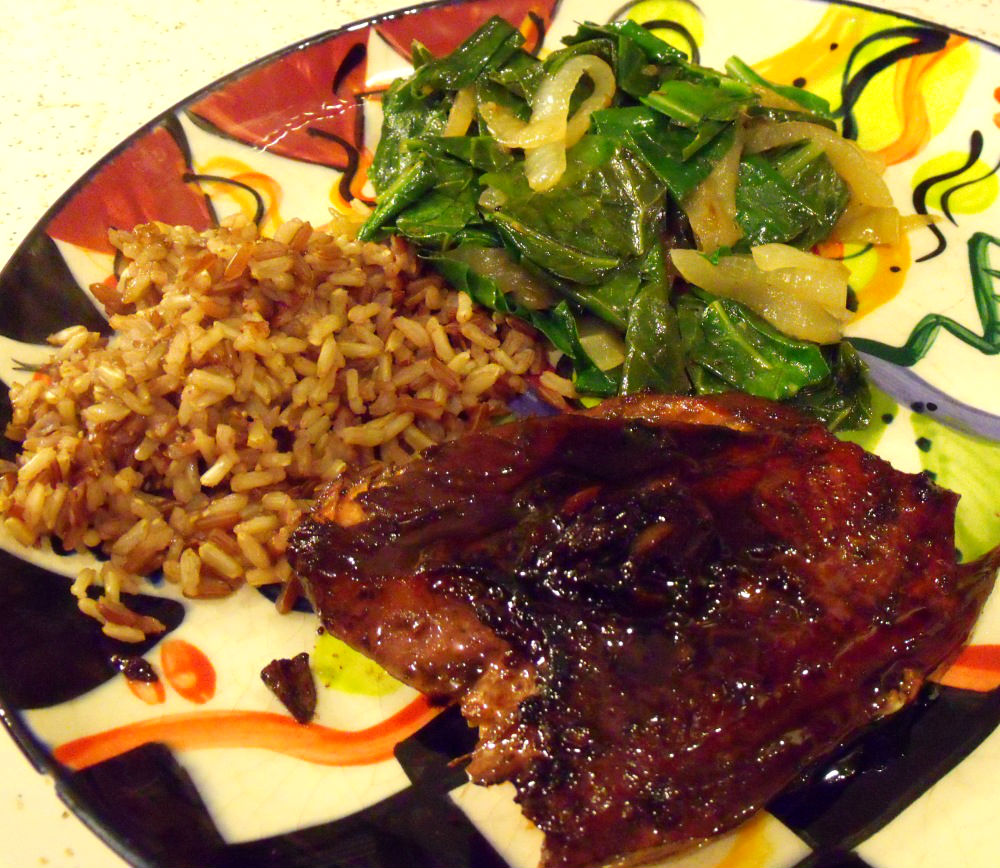 As soon as I walked in the door and poured myself some iced tea, I got a pot of red and brown rice started on the stove.

A lot of times when I make a teriyaki-esque type of sauce, it involves stir frying veggies or noodles or meat first, then incorporating an Asian sauce concoction into it.  But for some reason this time, I just wanted a nice thick, bubbly sauce, so I started with that.  Pus, I have about 9 half-used bottles of red wine that I’d really love to not transport with me to my next residence, so this seemed like a good way to tap into that. 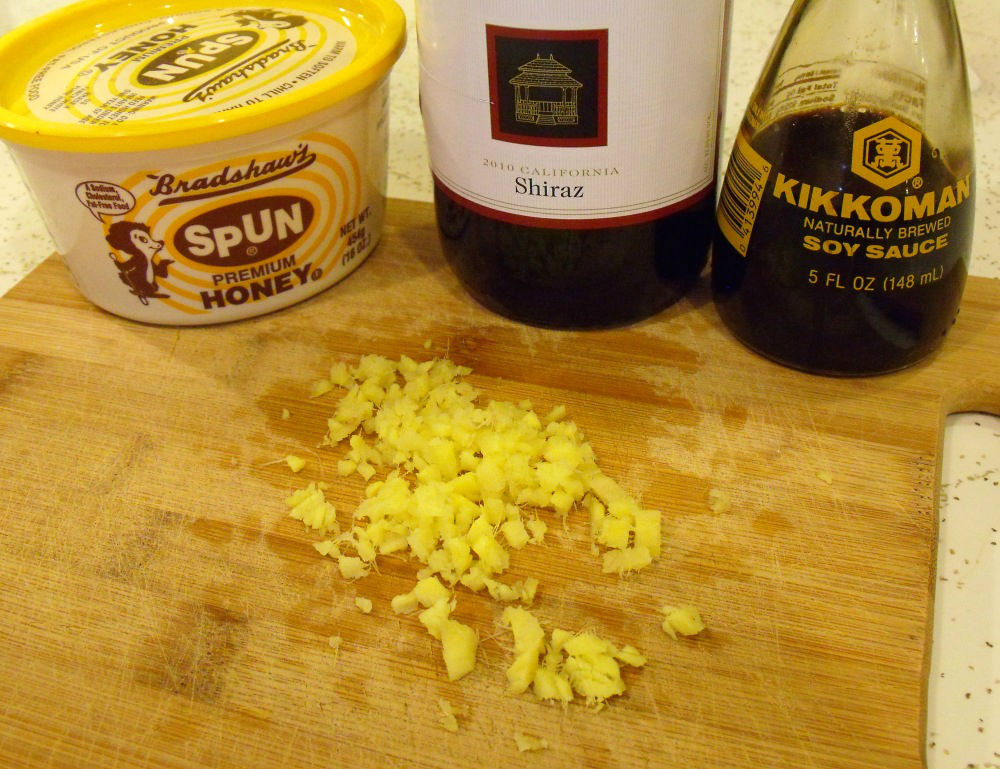 This went into the big skillet on medium-high heat with some honey, soy sauce, chopped garlic, and a hefty amount of red wine.  It smelled disgusting at first, but once the sauce bubbled together and reduced and the alcohol cooked off, it became deliciously sweet and dark and syrupy.

I put the salmon directly into the skillet, still frozen, and let it thaw and start to cook from the steam as the sauce continued to reduce and the water evaporated off the fish. 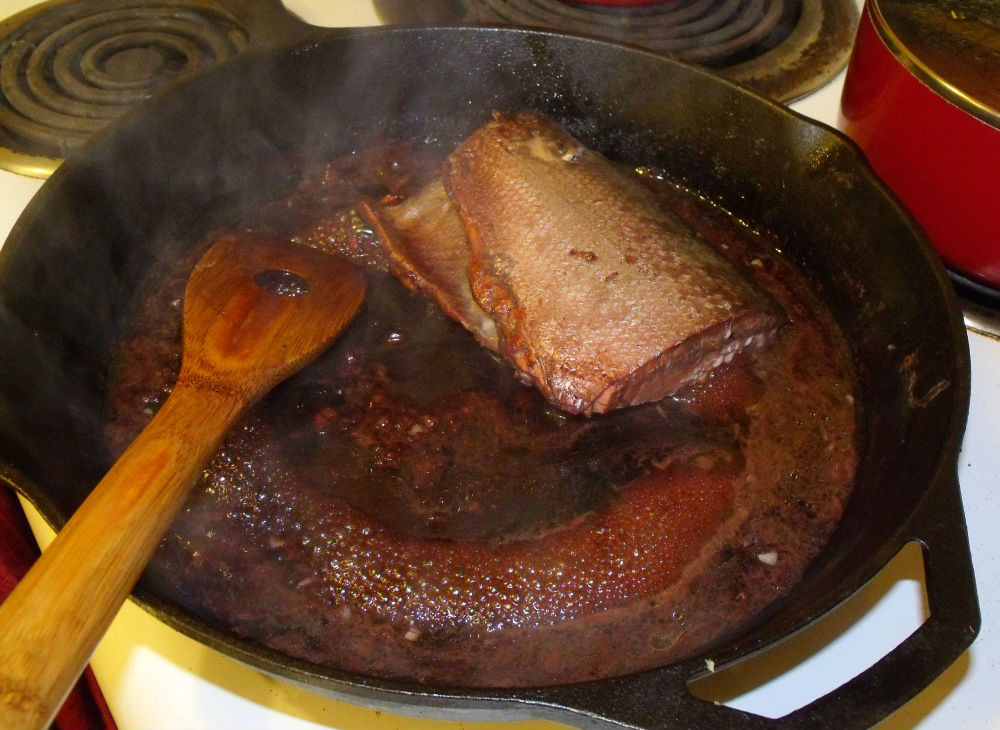 When it was about half cooked, I was able to remove the fish and peel off the skin with my fingers, removed the sauce from the heat and let it all sit there while I worked on the greens. 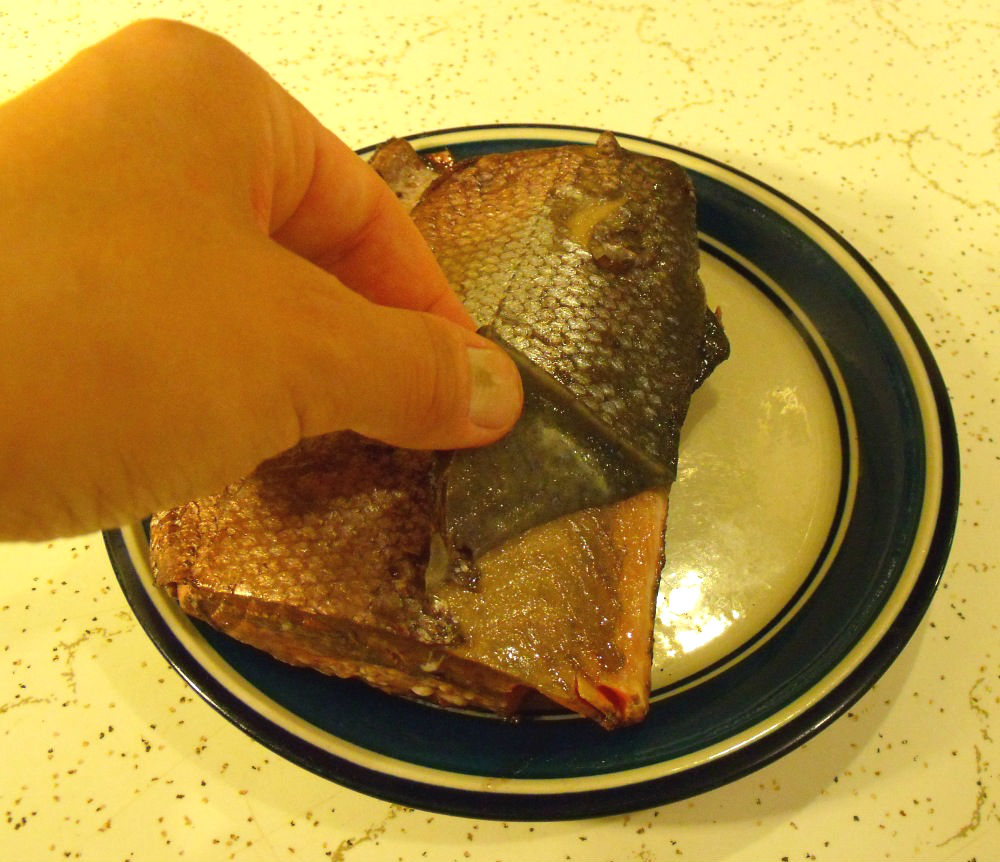 Have you ever had to deal with collard greens before?  There are few veggies out there that I won’t use in their entirety, but collard and chard stems are one of them.  I mean, if I’m making a soup the next day then sure, I’ll toss them in, but really other than that, I don’t force it.  I compost now so it’s all good.

What I like to do here is take each leaf, and quickly slice out the stem, making diagonal cuts right along each side of the rib and plucking the stem from the middle. 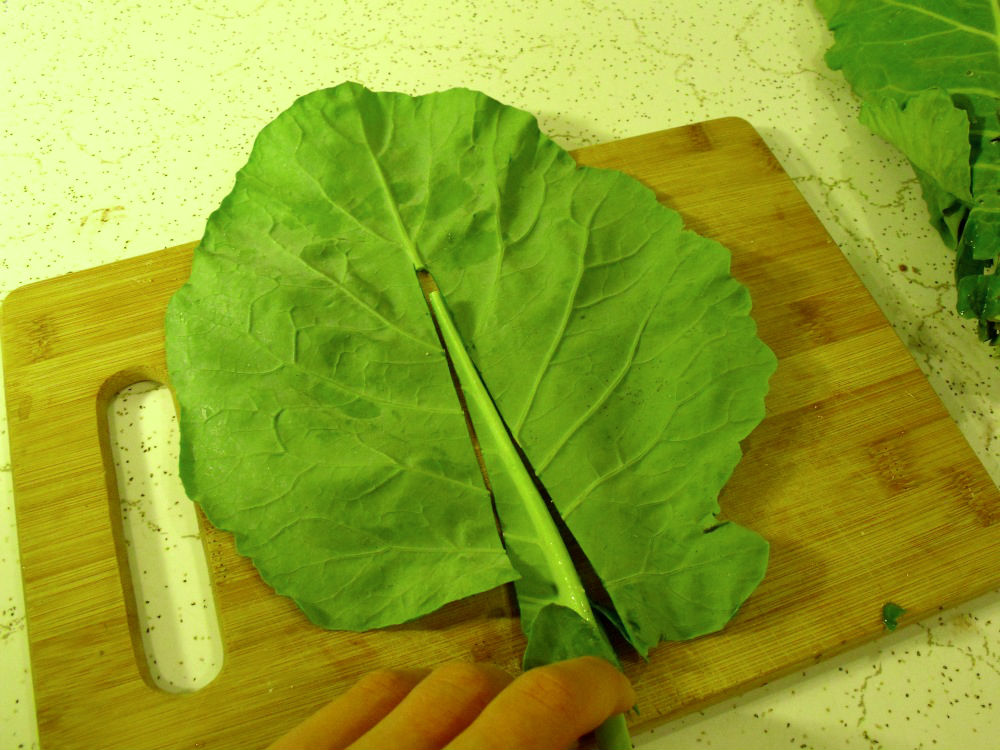 After doing this to each leaf, I stack them all on top of each other, roll them up like I’m chiffonading basil, make a slice lengthwise down the middle, and then again perpendicularly into strips — this makes perfect little rectangles for sauteeing. 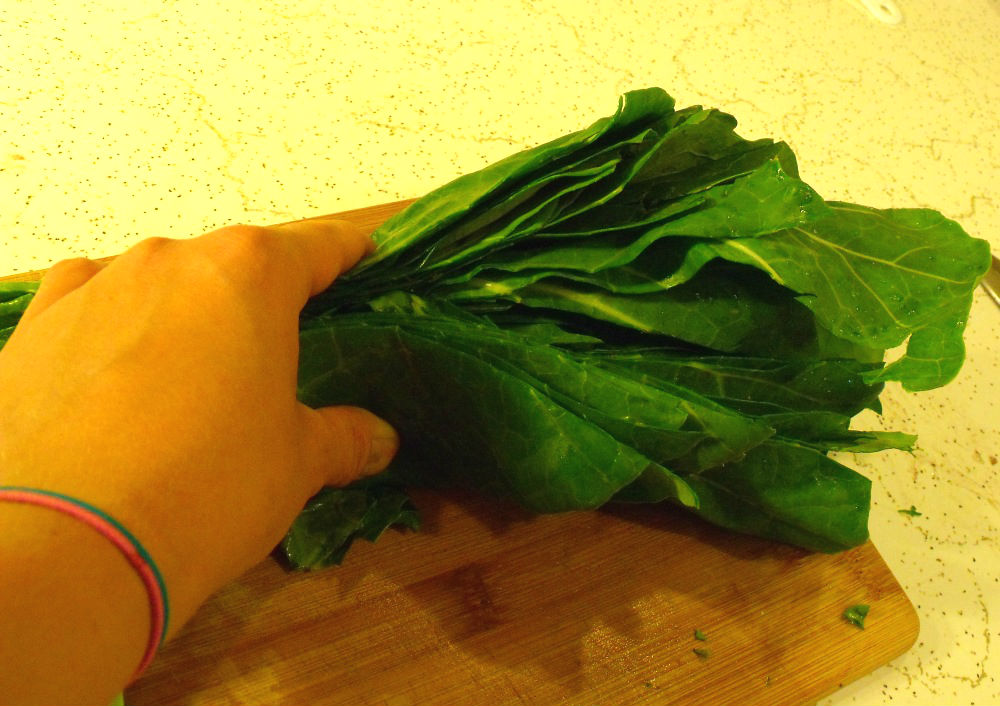 Sliced up half an onion… 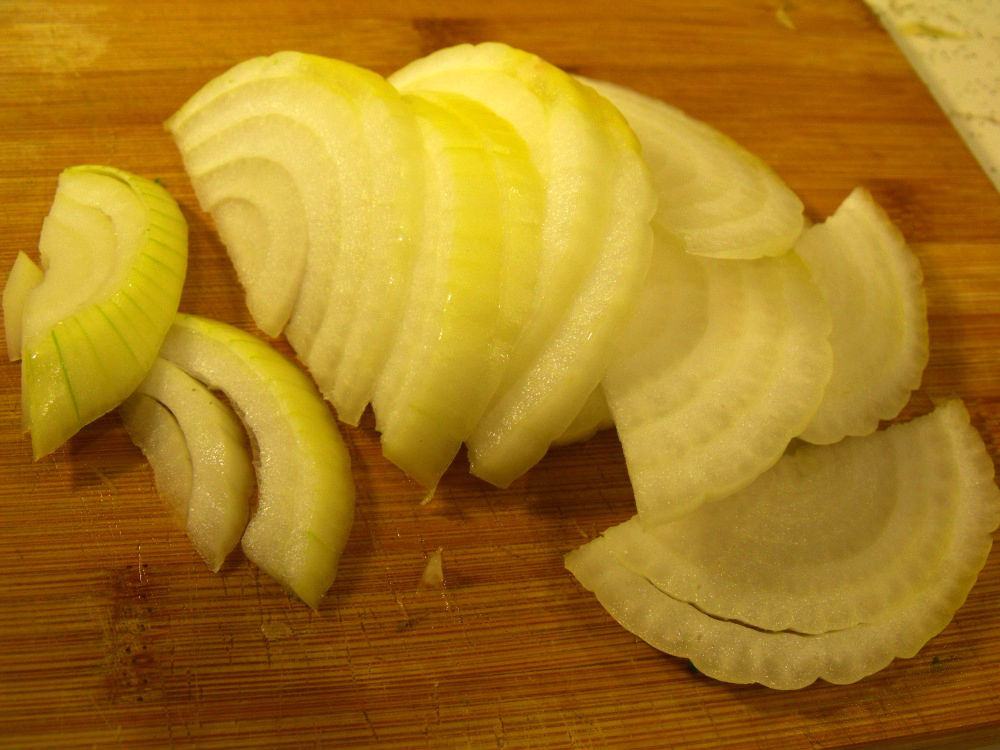 Then, in a separate pan, I heated up some coconut oil, and let the onion caramelize with some salt for a few minutes.

In went all the greens, and as they cooked down to the size of the pan, I added some jerk seasoning, a splash of cider vinegar, and some black pepper.

I wanted to add just a bit of chicken broth, but I’ll let you in on a secret.  You know those recipes that tell you to add like half a cup of chicken broth?  It’s like, who has that?  Any commercial liquid broth that’s open in the fridge will go back long before I get a chance to use half a cup of it, and any bullion requires a separate pot to make the broth in…for half a cup?  Here’s what I do: I make my own chicken stock each time I roast a chicken — about once a month — and keep the stock in serving-size containers in the freezer, usually cottage cheese-sized.

Then I use these the same way you’d use a stick of butter to grease a cooking pan: take out the fist-sized ice cube, and place it in the pan of whatever needs a little extra richness. 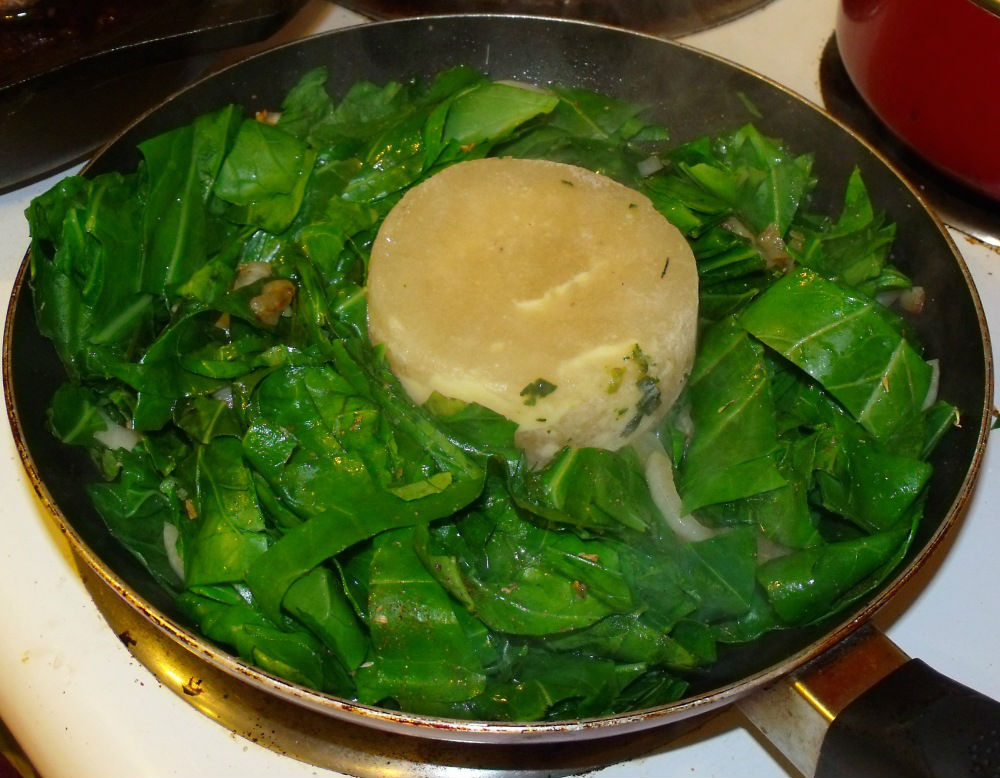 Not for too long — maybe 3 minutes, until just a few layers (or about half a cup!) melt off.  Then, put the broth cube back in the cottage cheese container and replace in the freezer.  No harm done, no broth wasted, no extra pot to clean.

Did I mention that I don’t have a sink in my kitchen?

Yep, 4 years and approximately 3,800 meals cooked…without a kitchen sink.  Just one of the many things I’m really, really excited about in my new house.

So anyway, I took the greens off the heat and let them absorb the rest of that broth while they cooled, and returned the salmon-and-sauce pan back to medium-high heat for another five minutes or so until the salmon had finished cooking and was wonderfully warm and caramelized. 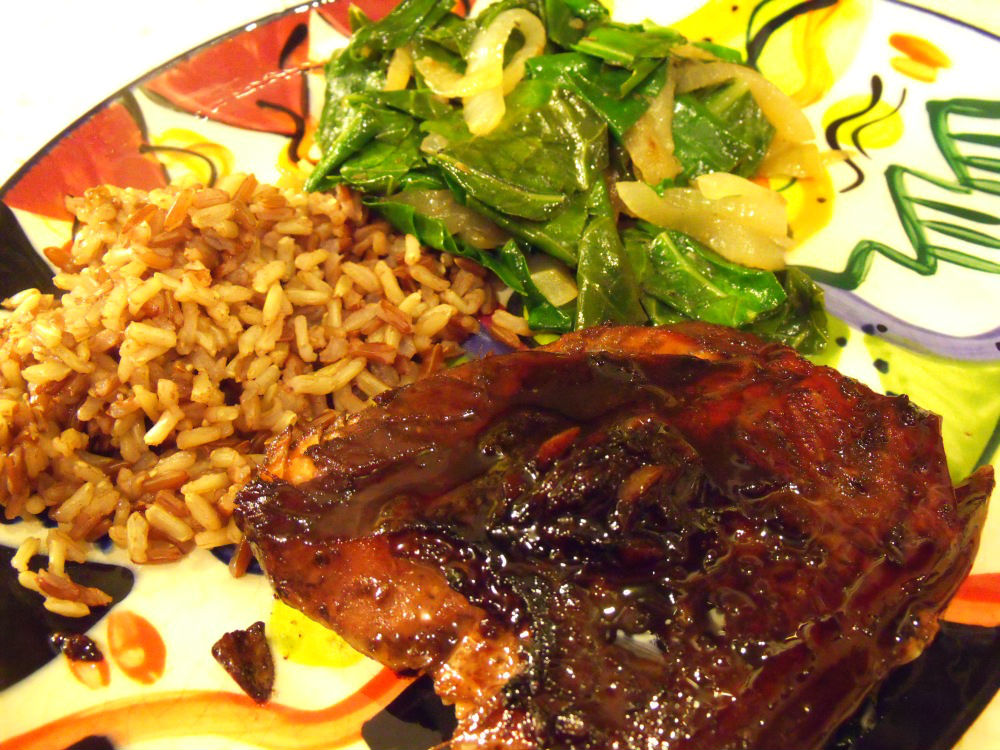