Last year, I took on the challenge of my first cleanse.  I’ve never been much of a cleanser (and certainly not a faster!), especially since I think I eat pretty well, as it is.  The idea seemed superfluous, until I met with my naturopath to try to figure out the cause of all these nagging little ailments I had, which I’d learned to live with over the years: pretty ridiculous fatigue, even if I’d had a good night’s sleep, and especially considering the volume of coffee I consume; apocalyptic periods; severe congestion while I was sleeping; random skin rashes; and periodic digestive problems.  Even when I was eating light and healthy foods, I would feel bloated after every meal, for the rest of the day, like my body just wasn’t processing anything I was eating.


Once I started listing all these things off, it became embarrassingly apparent that maybe something more systemic was going on.  We ran a bunch of blood tests, and surprisingly, they came back red-flag-free — stellar, even.  I think she actually told me it was one of the most impressive blood workups she’d ever seen.


So, she concluded, there’s a good chance that rather than a deficiency, there’s something you’re eating that’s “not serving you well.”  She suggested I try an elimination diet — that is, cutting out a whole host of foods from my menu for a full 3 weeks, and then spending the next 2 weeks doing “food challenges,” or adding each one of these foods back in, one-by-one, to see which one might be the culprit.


The ten foods that I was supposed to edit out for this cleanse are the ones with the highest risk of being inflammatory:

Yeah, for real.  When she said caffeine I just about died.  All of this seemed possible, actually, except for the coffee.  So I told her that I’d think about it, although already I had decided it was a no-go.  The idea of even 3 weeks without coffee seemed too bleak to consider.


But sitting at home later that night, considering that there was no way all these weird body issues I was facing could be normal, and now having realized that they might all be connected, there was no way to blot that recent information out, and I knew I’d have to try this at some point.


But how do you find five weeks of your life when there isn’t a major food-and-or-alcohol event going on?  In my world, it’s hard to even find a week where I wouldn’t be missing out on something.  I sat down with my calendar and realized that with all the weddings, festivals, craft shows, friends visiting, and camping trips I had scheduled between May and September, that the only way I’d be able to effectively try this cleanse was if I started the next day.


So that’s what I did.  I woke up the next morning and for the first time in over ten years, didn’t drink a cup of coffee (I still allowed myself green tea because, hey, I’ve got 3 businesses to run here), and drove bleary-eyed to New Seasons to stock up on amaranth and rice cakes.


And yeah, not drinking coffee sucked just about as bad as I expected it to…for about four days.  And then it actually got easier, and I found myself waking up in the mornings with a tiny shred of natural optimism, previously only induce-able by a strong homemade latte.


The food restrictions were actually no problem at all.  Once I got used to the fact that I wouldn’t be going out for a meal for the next month, and just focused on all the things I could cook at home, it became a fun game, to see what awesome meals I could come up with, given such a ludicrous set of restrictions.


The end result?  I got the best of both worlds.  By the end of the initial 3 weeks of elimination, every single one of my “symptoms” had disappeared — which was fantastic news, but also dreadful, because that must mean that one of those ten foods is my kryptonite.  But amazingly, as I started the challenge phase of the diet and added each food back in one-by-one, nothing changes.  No symptoms came back while I had glorious reunions with all my old friends — homemade honey whole wheat bread, crumbled bleu cheese in salads, iced coffee while I worked at a coffeeshop on a Tuesday afternoon…they all reintegrated quietly and cooperatively, and I got to shrug and say quizzically, “I guess I just needed a cleanse?”

So with gratitude towards the fact that I will still be able to eat deviled eggs at housewarming parties, and smoked gouda macaroni and cheese on damp Portland nights, but with respect towards the fact that something was out of whack as a result of eating those foods my whole life, I am implementing The Cleanse as an annual May ritual.


This time it’s only two weeks, since I don’t need to do the challenge part, and two weeks seems long enough to sweep out all the lingering inflammatory agents from the past year.  This time, however, I have more of a game plan. 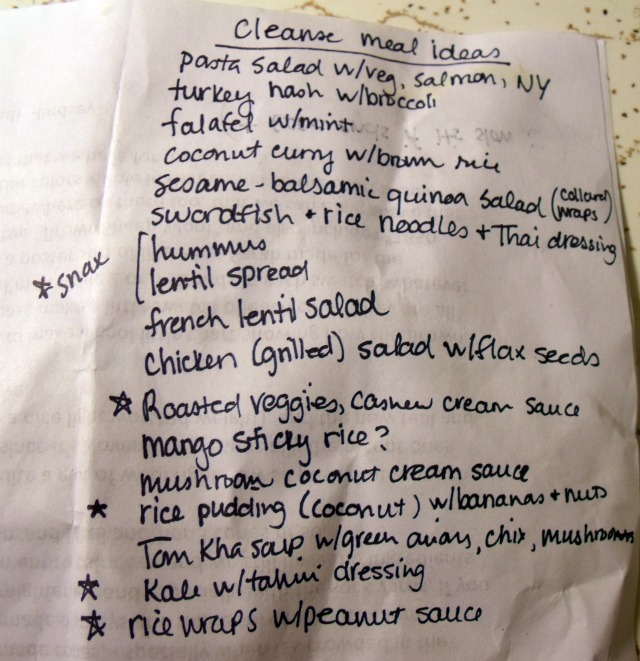