One of the toughest parts of this cleanse for me (other than the obvious — coffee…I had two separate dreams last night about coffee, deciding whether I wanted iced or hot based on recent variable temperatures) is breakfast.
Usually breakfast for me consists of either yogurt and granola, oatmeal, or eggs and homemade toast.  Given that those are all immediately stricken from my list of options, the last time I went through this I opted for smoothies, almost every day.
Smoothies are awesome, but I also live in a basement, and even when it could potentially get up to 65 degrees outside during the day (seriously people, let’s keep our fingers crossed), it’s hard to jump out of bed and eat something icy first thing in the morning day after day.
The other day while I was brainstorming my meal plan for this cleanse, a bowl of mango sticky rice popped into my head.  While I definitely plan on making this at some point during these two weeks, since the creamy component comes entirely from coconut milk, I followed this train of thought to its little brother, rice pudding. 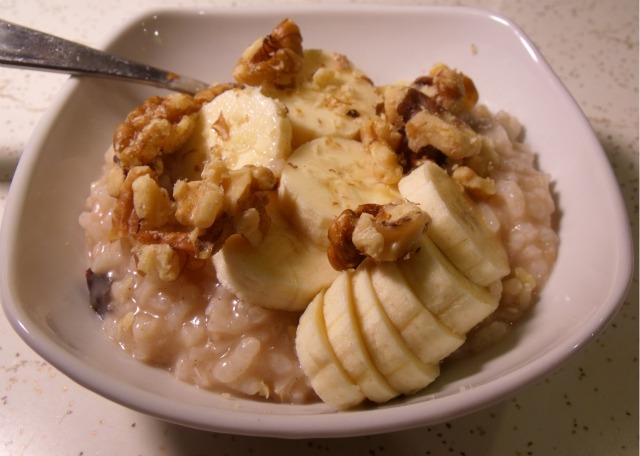 A quick Google search for vegan variations on this dessert quickly turned it into a healthy breakfast alternative, and totally easy.
I started with arborio rice, since I know from my risotto experience that it can quickly turn starchy and creamy, just what I wanted.  I cooked up half a cup of it, using half a cup of water and half a cup of coconut milk, and while this was all simmering together, added:
This made enough for two portions, so I set aside half for the next morning, and the first half, I topped with sliced banana and a handful of crushed walnuts.  Finally, smoothie, you have met your match.